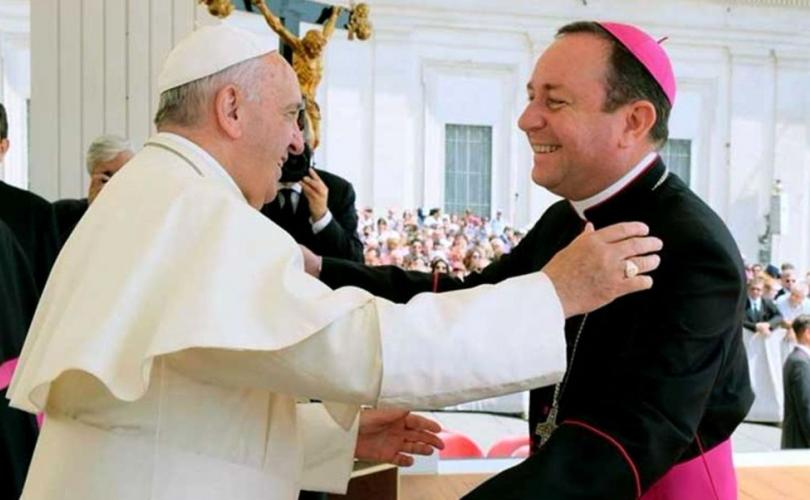 “Come give us a kiss, you naughty, naughty girl!”

(Originally penned and posted in January of ARSH 2019. Gustavo Zanchetta now has an international arrest warrant on his head for multiple sodomitical sexual assaults.)

(Addendum June ARSH 2020. Antipope Faggoglio-Weinstein just re-installed his “boy” Zanchetta at the Vatican Bank. Faggot mafia in FULL MANIFESTATION. Zanchetta SEXUALLY ASSAULTED seminarians. It was part of his compensation package to be placed at a seminary. These prelatial faggots like their prey YOUNG. The ultimate rush for these demoniacs is to corrupt the young.)

Today she has broken the completely not-shocking news that Antipope Bergoglio knew of the formally lodged complaints of sodmitical predation (complete with naked selfies!) of one of his very favorite Argentinian prelates, Gustavo Zanchetta, for YEARS.  Of course he did.  Antipope Bergoglio elevated Zanchetta to the episcopacy almost immediately upon usurping the Petrine See in ARSH 2013.  And where did Antipope Bergoglio send his beloved Gustavo Zanchetta upon naming him a bishop?  To Oran, a backwater diocese Northwest of Buenos Aires on the Bolivian border, nestled at the base of the Andes.

So?  Antipope Bergoglio sent one of his pet sodomites to a backwater.  Why is that of any significance?

Because, as I have reported here and tried unsuccessfully to get actual journalists to pick up, Jorge Bergoglio, through his very, Very, VERY intimate “friend” Gustavo Vera (it is widely known in Argentina that Bergoglio and Vera were sodomite lovers – hence Bergoglio’s installation of Vera in the luxury hotel that Bergoglio lives in in the Vatican – a choice made not out of “humility”, but in order to facilitate “encounters of exquisite tenderness and caressing”) is up to his eyebrows in the trafficking of child sex slaves.  Gustavo Vera is known to essentially hold the monopoly on boy prostitutes working the gay bars of Buenos Aires.  Vera uses his racketeering front of heading an NGO dedicated to – wait for it – fighting child traffficking, and his drifting in and out of government office to A.) protect his monopoly pimping boys to sodomites in the gay bars by cracking down on freelance rent boys working in the streets outside the bars and B.) facilitate running his pipeline of children which are essentially bought from destitute Bolivian Indian peasants living in remote, high Andean mountain villages in Bolivia.

The fact that Antipope Bergoglio IMMEDIATELY put the boy-chasing sodomite (but I repeat myself) Gustavo Zanchetta in Oran, the critical bordertown on the Gustavo Vera child trafficking pipeline between Bolivia and Buenos Aires, is no surprise whatsoever.  The fact that there was a seminary there that Zanchetta was given license to use as his own personal harem/hunting ground was just a consolation for Zanchetta being sent to a backwater town.

Once Zanchetta’s flaming sodomite activities reached critical mass, with PHOTOGRAPHIC EVIDENCE, Antipope Bergoglio brought Zanchetta to Rome and installed him in a very plush position overseeing the Vatican’s massive real estate holdings in Rome.  Zanchetta now lives a life of luxury and no doubt gets as much sodomy as he wants with whatever AGE he wants.  Why?  Because he could blackmail the crap out of Bergoglio.

Why don’t Zanchetta and all of the rest of the filth blackmail Bergoglio?  Well, A.) in a sense, they already are.  They live in protected luxury and get all the sodomy (and drugs) that they want, so why jeopardize this form of mutually agreeable blackmail/quid pro quo?  And B.) Bergoglio is well-known in Argentina for enforcing his rule with contracted physical violence and being involved in political assassinations.  In short, like Archbishop Viganò, they all know that to cross Antipope Bergoglio is to take your life in your own hands.

I spoke to some journalists about picking up the Argentinian aspects of Jorge Bergoglio’s criminality, but all declined giving the extremely weak excuse that the whistleblowers are people with morally dubious backgrounds.  AS IF WHISTLEBLOWERS FROM THE CHILD PROSTITUTION SCENE IN BUENOS AIRES ARE GOING TO BE CLOISTERED CARMELITE NUNS????

The reason that Antipope Bergoglio has so very conspicuously NEVER traveled to Argentina as the “heroic son returning in glory” since usurping the papacy is because he is known as a wildly corrupt criminal and is HATED by the Argentinian people.  Bergoglio’s criminal and sodomitical activity is discussed OPENLY on Argentinian television.

But, as with so much these days, the preferred way to deal with this is to TURN A BLIND EYE.

JUST DON’T TALK ABOUT IT.  IGNORE IT, AND IT WILL GO AWAY.  IT’S JUST A FEW AMERICAN CRANKS TALKING ABOUT IT.  JUST DISMISS THEM AS “INSANE”, AND THEN WAIT FOR IT TO BLOW OVER.  JUST KEEP SAYING, “THERE IS NO EVIDENCE”, EVEN WHEN THERE IS.  THERE IS NOTHING WE CAN DO, ANYWAY.  JUST WAIT FOR HIM TO DIE, AND THEN MAYBE SOMETHING CAN BE DONE, BUT NOT BY US.

Huh.  I just noticed…. The talking points above are EXACTLY the same as those used by the people who refuse to acknowledge the substantially erroneous nature of Pope Benedict’s attempted partial abdication.  EXACTLY. THE. SAME.