Sometimes there IS videographic evidence.

The key point here is Bergoglio’s deployment of accusations of “political vendetta” and “conspiracy by intelligence agencies” EVEN WHEN THE BISHOP IN QUESTION WAS CAUGHT ON VIDEO HAVING HIMSELF ANALLY SODOMIZED BY HIS 23 YEAR OLD DRIVER, and that the episode was purely in the domain of the “private life” of Maccarone.

Just sit in stillness with that.

Summary: Bishop and Dean of the Faculty of Theology of the UCA, Pontifical University of Buenos Aires (Grand Chancellor at the time was Archbishop Jorge Bergoglio). Maccarone was a homosexual and a pedophile, and a 23 year old Alfredo Serrano filmed them in the act. Serrano published the video because Maccarone did not give him the job he’d promised (the reason for the faggotry in the first place). Maccarone died in 2015 and was given a Catholic Funeral.

He Coulda Been a Contendah!

“In fact, when the scandal broke, the permanent commission of the CEA, chaired by Bergoglio at the time, produced a declaration of solidarity that produced an additional scandal. From Catholic Panorama ironically with an article that was published in various media .

Years after the scandal, he tried to wash the figure of Maccarone by making him discreetly reenter the ecclesiastical life during a ceremony in the Diocese of Venado Tuerto , Santa Fe, about which we also published an article that was published in international media.

Today La Nación dedicates an apology to him , as if his “inclinations” were not reprehensible even when those affected were minors, as in the case of Chascomús.

This intellectual, a great figure of the gay lobby, could not overcome the scandals, but under a more permissive pontificate with homosexuals, he could have become, as was the project of his close friends, Archbishop of Buenos Aires.” 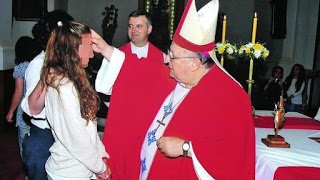 Maccarone conferring the Sacrament of Confirmation for teenagers in ARSH 2010, fully five years after a video of him being sodomized by his young driver was made public. At the same time, he was “professor emeritus” at UCA, of which Bergoglio was the Grand Chancellor.