Now, Windswept House (the novel published in ARSH 1996 written by Vatican insider Malachi Martin, described by Martin himself as “historical FACTion”, that is, extremely thinly-veiled non-fiction given just enough cover to legally protect Martin from lawsuits, detailing a plot by satanist infiltrators of the Vatican to force the Pope to “resign” and installing their own satanic Antipope to destroy the Church from the inside) isn’t “evidence” on the level of Canon Law, Pope Benedict’s words in February ARSH 2013, his subsequent words and deeds, or the words of +Ganswein in May-June ARSH 2016.  BUT, Windswept House is undeniably something that has proven beyond a shadow of a doubt to be a genuinely INFORMED piece of evidence that belongs in the “very, very, VERY Interesting” file, and contributes to the massive consilience of the dataset demonstrating that Pope Benedict never validly resigned.

And what do we see? Martin explicitly predicted that not only would the true Pope draw a distinction between the munus and the ministerium in his coerced putative resignation, but that this distinction would cause the blood of the enemy infiltrators to run cold – because the distinction was legally pivotal, as we have been saying, nay, SCREECHING for over half-a-decade now. Further, Martin predicted that the College of Cardinals and Bishops would just gloss right over this distinction out of both ignorance and malignant indifference.

Folks, there is NO WAY Martin’s narrative is mere coincidence.  NONE. The only major difference between Martin’s narrative and reality is that Martin thought that it was JPII, hence “the Slavic Pope”, that the satanists/Freemasons were going to go after. Alas, no.  It was the BAVARIAN Pope, who had a history of quitting, that was the target. Martin died (under mysterious circumstances) in ARSH 1999 and thus never saw in this life how the events he knew were planned for decades actually unfolded.

It’s right there on page 553, which I have screen capped from the free online version linked above, and which I will also type out so that the citation text populates on search engines.

Note that this passage opens with an explicit declaration by Martin that “synodality” is an evil device being used by the enemy infiltrator “progressive extremists” to attempt to wreck the Church and reduce the Papacy to a meaningless figurehead position devoid of real authority.  SOUND FAMILIAR???

Oh, ONE more thing.  Klaus Schwab – yes, THAT Klaus Schwab – appears in Windswept House under the name “Jacques Deneuve”. You can’t make this stuff up. 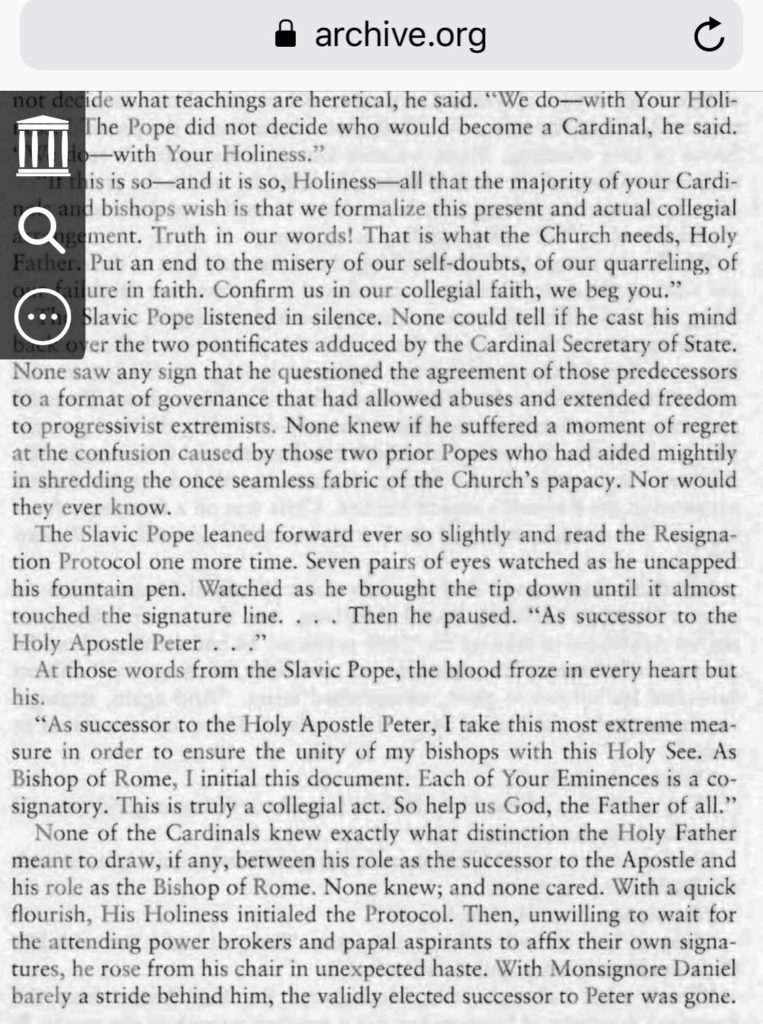 “If this is so – and it is so, Holiness – all that the majority of your Cardinals and bishops wish is that we formalize this present and actual collegial arrangement. Truth in our words! That is what the Church needs, Holy Father. Put an end to the misery of our self-doubts, of our quarreling, of our failure in faith. Confirm us in our collegial faith, we beg you.”

The Slavic Pope listened in silence. None could tell if he cast his mind back over the two pontificates adduced by the Cardinal Secretary of State.  None saw any sign that he questioned the agreement of those predecessors to a format of governance that had allowed abuses and extended freedom to progressivist extremists. None knew if he suffered a moment of regret at the confusion caused by those two prior Popes who had aided mightily in shredding the once seamless fabric of the Church’s papacy. Nor would they ever know.

The Slavic Pope leaned forward ever so slightly and read the Resignation Protocol one more time. Seven pairs of eyes watched as he uncapped his fountain pen.  Watched as he brought the tip down until it almost touched the signature line…. Then he paused. “As successor to the Holy Apostle Peter…”

At those words from the Slavic Pope, the blood froze in every heart but his.

“As successor to the Holy Apostle Peter, I take this most extreme measure in order to ensure the unity of my bishops with this Holy See. As Bishop of Rome, I initial this document. Each of Your Eminences is a co-signatory.  This is a truly collegial act. So help us God, the Father of all.”

None of the Cardinals knew exactly what distinction the Holy Father meant to draw, if any, between his role as the successor to the Apostle and his role as the Bishop of Rome. None knew; and none cared. With a quick flourish, His Holiness initialed the Protocol. Then, unwilling to wait for the attending power brokers and papal aspirants to affix their own signatures, he rose from his chair in unexpected haste.  With Monsignore Daniel** barely a stride behind him, the validly elected successor to Peter was gone.

*Graziani = Cardinal Angelo Sodano, Secretary of State under JPII and Pope Benedict.  Sodano was in the pay of the satanic sex cult, The Legionaries of Christ and protected their drug-addled bisexual incestuous child rapist founder Macel Maciel Dellogado, and high-level Legion priests engaged in egregious sexual misconduct and financial intrigue, such as Fr. Thomas Williams. The Secretary of State at the time of Pope Benedict’s failed partial attempted abdication was Cardinal Tarcisio Bertone, also mired in financial scandal, who claimed to have known months in advance of Pope Benedict’s “intentions”. After Bergoglio’s usurpation, Bertone was quickly hustled out, and the Chinese asset Pietro Parolin was installed as Secretary of State.

**Monsignore Daniel = Monsignore Stanislao Dziewicz, JPII’s Polish personal secretary, who was also wildly corrupt and provided manipulative and dishonest counsel to Pope JPII in order to grease his own palms and secure his position.  The direct analogue to Dziewicz when the narrative is mapped onto Pope Benedict XVI is, of course, +Georg Ganswein, Pope Benedict’s personal secretary and double-dealing false friend, and some say, prison guard.