The “always” is also a “for-ever” – there can no longer be a return to the private sphere. My decision to resign the active exercise of the ministry does not revoke this. I do not return to private life, to a life of travel, meetings, receptions, conferences, and so on. I am not abandoning the cross, but remaining in a new way at the side of the crucified Lord. I no longer bear the power of office for the governance of the Church, but in the service of prayer I remain, so to speak, in the enclosure of Saint Peter. Saint Benedict, whose name I bear as Pope, will be a great example for me in this. He showed us the way for a life which, whether active or passive, is completely given over to the work of God.

Tell me more about how there is simply no evidence, when these 138 words (in English translation) are more than enough.

I’d also like to echo and reiterate something Mark Docherty of the NonVeniPacem blog said yesterday.  Antipope Bergoglio, in saying, on video no less, that the idols absolutely, positively are the Pachamama demon, has left zero doubt as to what it is that is happening when he enshrines these things in St. Peter’s tomorrow – the Feast of Christ the King no less.

VISIBILITY, VISIBILITY, VISIBILITY.  Our Blessed Lord is so, so good to us.  Like His crucifixion, so public, so visible, so humiliating, He is now, in these dark days, for love of us, making sure that everything about this hellish situation is VISIBLE so that we may LOOK and SEE and KNOW.

And Jesus making answer said to them: Go and relate to John what you have heard and seen.

I can’t help but point out that the Summorum Pontificum pilgrimage is happening in Rome now.  There are Trads from all over the world converged on Rome right now, more than any other time of the year.  Rome is at “peak Trad” right now.  The troops are already mustered.  The numbers are there.  Will anyone step to the front and lead any protest action?  Will anyone sound the proverbial Horn of Helm Hammerhand?

Lastly, Regina Magazine has taken the step of publicly stating that they will no longer refer to Jorge Bergoglio as “Pope Francis”.  Let us hope and pray that they are NOT false sedevacantists now, because the See is very much occupied by Pope Benedict XVI, and has been since April ARSH 2005.  This is why I have been saying for years now that “Francis is Pope” false base premise leads to false sedevacatism (which is a distinct phenomenon separate and apart from 1958 sedevacatism – the Regina Magazine folks have absolutely NOTHING to do with 1958 sedevacantism, let it be well noted.) 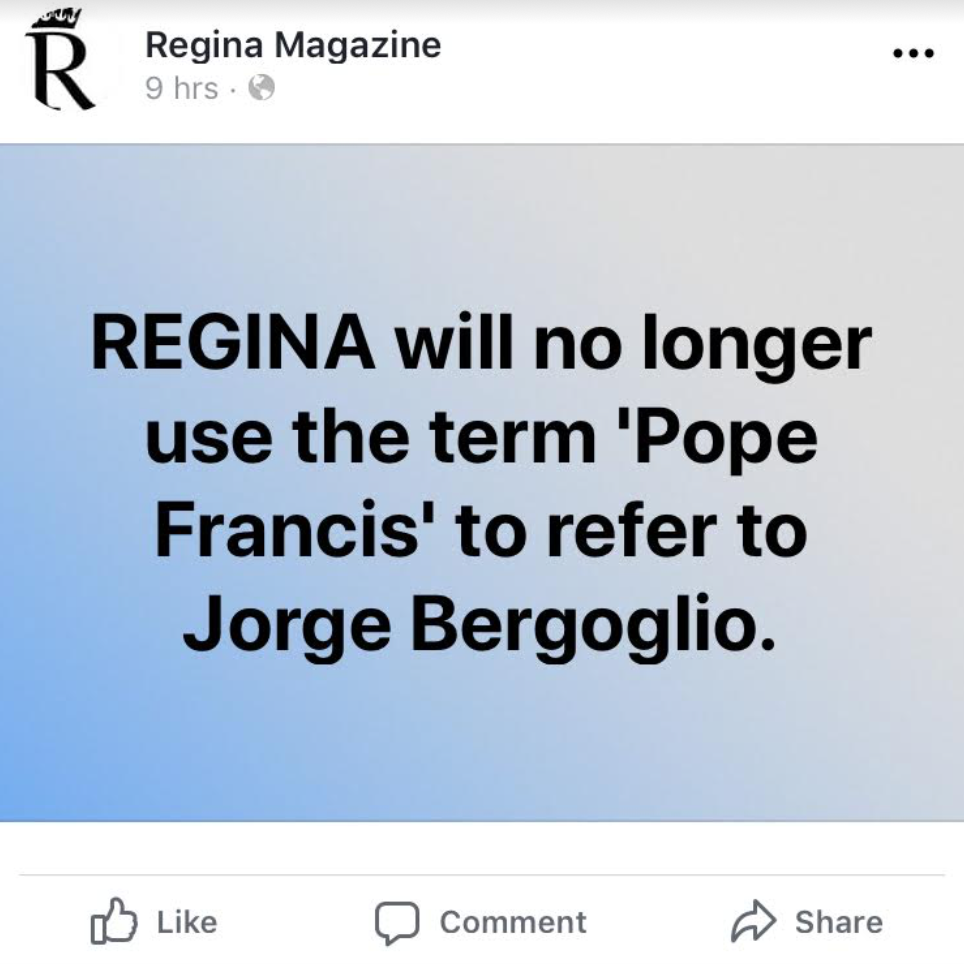