One of the most popular pieces I have written over the years is the one about The Science of the Immaculate Conception and Assumption of the Blessed Virgin Mary.

Today is the feast of the Immaculate Conception.  It is a holy day of obligation – just like a Sunday, and is the highest Marian Feast of the year.

It turns out there is even more jaw-dropping science relating to Our Lady as the Godbearer, specifically relating to the immense suffering she endured as the Mother of God – remember she is Our Lady of Sorrows.  The Seven Sorrows, or Dolors, of the Blessed Virgin are:

1. The prophecy of Simeon: “And Simeon blessed them, and said to Mary His mother: Behold This Child is set for the fall and for the resurrection of many in Israel, and for a sign which shall be contradicted; And thy own soul a sword shall pierce, that out of many hearts thoughts may be revealed” (Luke II: 34-35).

3. The loss of the Child Jesus in the temple: “And having fulfilled the days, when they returned, the Child Jesus remained in Jerusalem; and His parents knew it not. And thinking that He was in the company, they came a day’s journey, and sought Him among their kinsfolk and acquaintance. And not finding Him, they returned into Jerusalem, seeking Him” (Luke II: 43-45).

4. The meeting of Jesus and Mary on the Way of the Cross: “And there followed Him a great multitude of people, and of women, who bewailed and lamented Him” (Luke XXIII: 27).

5. The Crucifixion: “They crucified Him. Now there stood by the cross of Jesus, His Mother. When Jesus therefore had seen His Mother and the disciple standing whom He loved, He saith to His Mother: Woman: behold thy son. After that He saith to the disciple: Behold thy Mother” (John XIX: l8, 25-27).

6. The taking down of the Body of Jesus from the Cross: “Joseph of Arimathea, a noble counselor, came and went in boldly to Pilate, and begged the body of Jesus. And Joseph buying fine linen, and taking Him down, wrapped Him up in the fine linen” (Mark XV: 43-46).

7. The burial of Jesus: “Now there was in the place where He was crucified, a garden; and in the garden a new sepulcher, wherein no man yet had been laid. There, therefore, because of the parasceve of the Jews, they laid Jesus, because the sepulcher was nigh at hand” (John XIX: 41-42).

As research on the Narcissism video continues, the demonic, murderous hatred that narcissists have for other people revolves around human beings who, unlike them, are capable of and have a massive capacity to love, and who experience all of those emotions which derive from love, including sadness and mourning, most especially the capacity to empathize and mourn for others.  Narcissists, by a free choice and movement of their will, have purged themselves of love, are thus incapable of empathy, and thus only experience the demonic emotional palate of anger, hatred, jealousy and fear.  They invariably accuse people who experience normal emotions of being “needy”, “insecure”, self-absorbed”, “manipulative” and “emotional blackmailers”.  This is a species of gaslighting, a hallmark tactic of pathological narcissists.

We know from the example of Our Immaculate Mother, conceived without Original Sin, who suffered more than any mortal, and the words of Christ Himself that those who mourn are blessed, and will be comforted, that the Narcissists’ contempt for those who love and are normally, humanly affective is, in fact, diabolical.

Now we just said that the Blessed Mother suffered more than any mortal person before, or since, or yet to come. And science, specifically cardiology, has just recently identified that people can and do die of a “broken heart”, meaning from intense sadness and suffering.  It is called “Broken Heart Syndrome”, or Takotsubo Cardiomyopathy.  It is a completely different physiological event from a myocardial infarction, or heart attack, even though the symptoms and outcome (heart failure) are exactly alike.  It centers on abnormal movement of the interior heart wall of the left ventricular apex.  Remember that.  It is going to be important in a minute.

Well, as was initially covered in the Science of the Immaculate Conception and Assumption essay, cells pass from every unborn child to the mother, and then persist in the mother’s body for the rest of her life.  Now, we all thought that factoid was pretty spectacular by itself, right?  Oh, just wait until you hear THIS:

Some of the cells passed from unborn children to their mothers are STEM CELLS.  These stem cells persist in the mother’s body for the rest of her life, and when a trauma happens to the mother, the stem cells from the baby spring into action, migrate to the area where help and healing are needed, where they then undergo cellular maturation and integrate themselves into the mother’s tissue.  Guess what the most common locus for these healing events is?

2.  The locus of Takotsubo cardiomyopathy in the heart is the interior wall of the left ventricle at the apex.  This is literally “the bottom of your heart”, or the “depths of my heart”.

3.  All of the Eucharistic miracles involving the Host manifesting as flesh that have been tested have yielded the same results.  The flesh is that of a human male, blood type AB, and the cells are myocardium – that is, interior heart wall.

Our Blessed Lord comes to us in the Eucharist, and will graft our broken hearts with His own flesh, just as he did with His Mother.  But we have to love Him, which means follow His Law and confess our sins, and have hearts that are capable of breaking, and which we allow to be broken in the first place by loving others.

…Who healeth the broken of heart, and bindeth up their bruises.
…Qui sanat contritos corde, et alligat contritiones eorum.

Happy feast of the Immaculate Conception to one and all.
Virgin Most Powerful, pray for us. 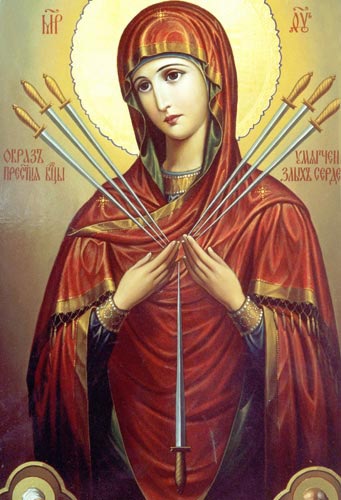