“The Assumption” is the Dogma that the Blessed Virgin Mary was assumed BODY and SOUL into heaven at the end of her life. The archaeological record is one of the most compelling confirmations of this truth. The veneration of burial places, tombs and relics of dead saints is universal and consistent in the early Church and has carried right through to this day. Everyone knows where St. Peter is buried, and the relics of St. Paul and the other apostles and saints, even recent saints like St. Bernadette are venerated and in some cases spread all over the earth. Almost every Catholic Church contains the relics of multiple saints.

But one saint has NEVER had any location venerated as her permanent burial place, nor have there ever been any relics purported to be part of her body. Never. Who is this person whom everyone has always agreed has no earthly tomb and for whom there are no earthly relics? Only the second-most-important person to ever walk the earth, and THE most important person who was NOT God Incarnate: The Blessed Virgin Mary.

The reason why she has no tomb and no relics is because at the end of her life (the Church is not sure whether or not she actually died, and so that question is intentionally left open) Our Lord immediately granted to her the promise made to all Christians of the resurrection and heaven, BODY AND SOUL. So, there are exactly two physical human bodies locally present in heaven right now: Our Lord and His Mother. We don’t know exactly how to explain this, but I suspect that it has something to do with temporal or dimensional phase shifting, as Our Lord walked through walls, doors and other solid objects after the Resurrection (John 20:19). As Einstein discovered, mass and energy are equivalent, and thus can phase back and forth. We also know from the Holy Sacrifice of the Mass itself, which is a bending of time such that the moment of Calvary touches today, that while we experience time in a linear continuum, God is in no way constrained by linear time, and can manipulate, bend and intersect points in time. How? Oh, no clue. There is so much about physics that we don’t understand. But hey, that’s all part of the fun of the Mystery, right?

Only after the Second Coming and the Judgment will the rest of the Church be reunited to their resurrected (for those who have died) or glorified (for those who are alive at the Second Coming and Judgment) bodies, to be united to the Trinity, dwelling inside the Beatific Vision forever. But Mary is already there. She has already been ASSUMED into heaven, and is the proof of God’s promise of what lies in store for those who die in the Church, in friendship with Christ. And today, August 15th, is the Feast of the Assumption. This is a Holy Day of Obligation, which means that all Christians are required to attend Mass just as if it was a Sunday. So, what better time to talk about and explain the doctrines of the Immaculate Conception (the feast of which is December 8th, also a Holy Day of Obligation – you MUST go to Mass that day as if it was a Sunday) and the Assumption, and the science that underpins both dogmas.

First, the Immaculate Conception. This doctrine and non-negotiable tenet of Christianity teaches that Mary was, by the grace of God, prevented from carrying the stain of Original Sin from the moment of her conception. This is a deal-breaker. The logical consequences of denying the Immaculate Conception inevitably lead to denying the Incarnation and Divinity of Jesus Christ Himself. The Blessed Virgin cleared all of this up herself when she appeared to Bernadette Soubirous at Lourdes, France and told her in no uncertain terms, “I am the Immaculate Conception.”  Case closed.  All that remained was for science to progress sufficiently to confirm this – and that has now happened.  More on that in a second.

Mary was saved from sin by her Son, like all of the other faithful, it is just that the timing of her salvation was different from everyone else. This is why Mary, sinless though she is, still calls God “my Savior” in her Magnificat in Luke 1:46-55. Instead of letting Mary fall in the mud puddle of sin like the rest of us, God stuck out His Arm back through time from the Cross and kept her from falling in the mud puddle – but if it wasn’t for God’s positive action of reaching out across time from the Cross and holding her from falling, she would have fallen. This is called “grace”, and is what the Angel Gabriel was referring to when he greeted Mary at the Annunciation with the words, “Hail! Full of grace! The LORD is with thee. Blessed art thou among women.” Luke 1:28

Full of grace means FULL. OF. GRACE. How full is full? Full is totally full. To the brim. Full does not mean half-full or mostly-full. Full means full. Mary was FULL OF GRACE.

And because Mary was FULL of grace, as we know directly from the inerrant words of the Gospel of Luke, there was absolutely no room for sin. Mary didn’t sin because God her Savior had filled her with grace and therefore she just COULDN’T sin. Most of us reading this have a tiny taste of what this is like. For example, I’m guessing that everyone reading this would be incapable of killing a baby. We just COULDN’T do it. No matter what threat was made against us, no matter what the adverse consequences to our own lives might be, we would take any adverse consequence before killing a baby. We are simply incapable of performing that act. Why? What is that internal force of energy that prevents us from committing acts of evil even when under intense duress and threat? It is grace. Pure and simple.

Sadly, most of us have a little grace, but are not in any way FULL of grace. I am personally much closer to being full of crap than of grace (which many of you have already pointed out to me – thank you very much), hence the daily, persistent, repeated sinning on my part. And I suspect it is a similar situation with you, dear reader, with the grace-to-crap ratio being much higher for you than for me. I really am quite full of crap. With Mary there was no crap because God her Savior had FILLED her with grace, and thus there was no room for crap, and thus there was no sin. It’s really just 2nd grade math if you think about it. But WHY? Why was it essential for Mary to be sinless and sinless from the moment of her conception? That’s where the science comes in.

There are two phases to Mary’s existence. The first phase was from the moment of her conception until the Annunciation, which is when Jesus was conceived in her womb. The second phase was from that moment of Jesus’ conception forward for all eternity. Each phase has its own physiological delight attached to it which required Mary to be a sinless vessel for Our Lord.

First, the pre-Annunciation period. As it has been discovered just within the last few decades, all baby girls have all of the eggs that are ever going to be in their ovaries fully formed not just at birth, but fairly early in their fetal development phase. Unlike men who are continuously producing new sperm, a woman’s eggs aren’t created and formed with each menstrual cycle. All that is happening during a cycle is that an egg, which has been fully formed in a woman’s body since she was a pre-born fetus, is released into the reproductive tract. What this means theologically is that the egg containing the 23 chromosomes that God would miraculously fertilize with 23 chromosomes that He miraculously supplied (including a Y chromosome) to become the Word Made Flesh, Jesus Christ, was physically present inside Mary’s body from the time that Mary was inside of her mother’s womb. That egg, and those chromosomes, that physical constituent of Our Blessed Lord was present inside of Mary’s body, waiting to be . . . if I may use the word . . . consecrated. The word consecrate, when broken into its Latin components means:

Con: With
Secr: Holy
Ate: Territory of a Ruler

And so, Mary was, from the time she was inside St. Anne’s womb, already carrying a portion of Our Lord’s physicality, namely 23 of His chromosomes. And thus Mary was, from her very beginning, already a proto-tabernacle, already the Ark of the New Covenant, carrying within her what would be consecrated into The Law Incarnate, The High Priest, and The Bread of Life – just like the Old Ark, except perfected and fully fulfilled as God Incarnate. And as we know from the book of Exodus, the Old Ark had to be “perfect”. And thus, the Ark of the New Covenant was TRULY perfect, except this perfection was a perfection that only God Himself could accomplish: the perfection of Mary, full of grace and thus saved from all sin, including Original Sin.

The second phase is actually broken into two sub-phases. The first sub-phase is when Mary was pregnant with Jesus and His entire body was inside of hers.

The second phase is that phase from the time of Jesus’ birth forward into all eternity. Jesus is STILL physically inside of Mary in a unique way. It was discovered just a few short years ago that immune cells pass from a pre-born child to the mother across the placenta. Not only do these immune cells, which are the child’s and thus carry the exclusive and complete DNA of the child, pass across the placenta, but they persist in the mother’s body for the rest of her life. A woman who has carried a son has immune cells with Y-chromosomes in her bloodstream that can now be filtered out of her blood and observed. Female children also pass cells to their mothers.

Thus, a woman truly does carry her children around inside of her, with their DNA coursing through her heart, for the rest of her life. That isn’t just a sentiment – it is a physiological fact.

Thus, Mary continued and continues to this day to be a perpetual, living physical tabernacle of her Son, as she carries cells with His DNA in her bloodstream. And so now we see why Mary was and had to be filled with grace and thus saved from the stain of sin from the moment of her conception eternally forward – because she was and is a perpetual Ark of the New Covenant.

This also explains why Mary’s body was assumed into heaven immediately at the end of her earthly life, because her body literally contained living cells of Our Lord and thus her body could not remain on earth in physical death to decay in any way.

She simply was afforded the same physical resurrection that all of the faithful will receive, albeit instantaneously for her, given her very special state, both spiritually and physically. This is what is doctrinally referred to as “The Assumption”.

Finally, if you are a quasi-Christian Protestant-pagan reading this and it has made you the least bit angry, you need to sit down and ask yourself one excruciatingly simple question: WHY?  Why are you so utterly consumed with hatred for the MOTHER. OF. GOD.?

Hail Mary, full of grace, the Lord is with thee. Blessed art thou amongst women, and blessed is the fruit of thy womb, Jesus. Holy Mary, Mother of God, pray for us sinners, now and at the hour of our death. Amen. 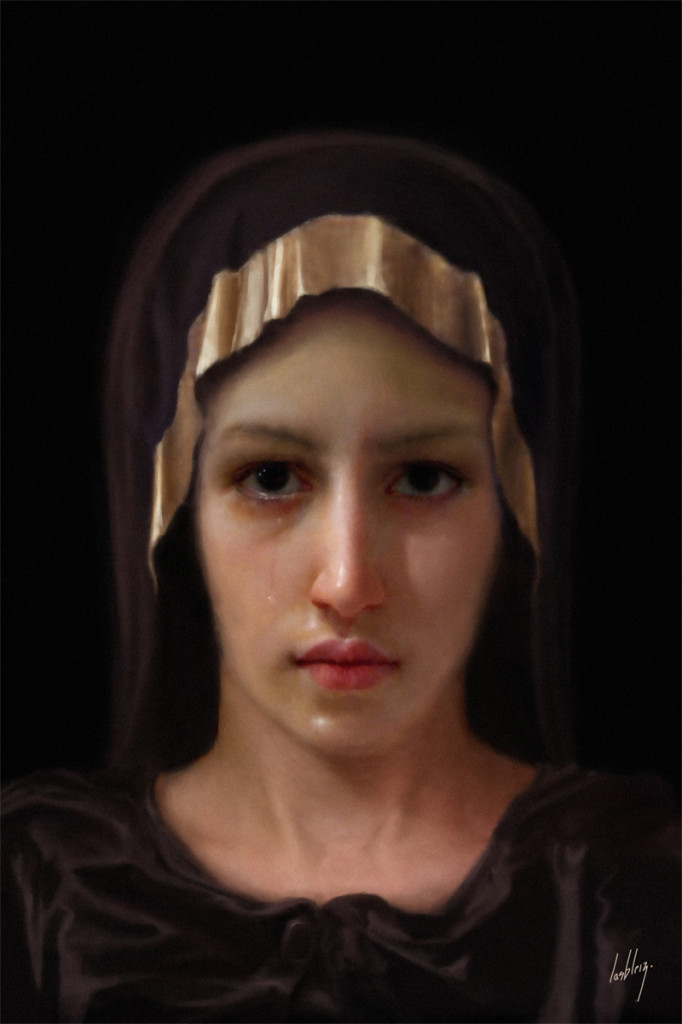 The Immaculate Conception, as artistically extrapolated from the image of her Son on the Shroud of Turin.