BY THE SUPREME PONTIFF (sic)

In order to promote the concord and unity of the Church, with paternal solicitude towards those who in any region adhere to liturgical forms antecedent to the reform willed by the Vatican Council II, my Venerable Predecessors, Saint John Paul II and Benedict XVI, granted and regulated the faculty to use the Roman Missal edited by John XXIII in 1962.[3] In this way they intended “to facilitate the ecclesial communion of those Catholics who feel attached to some earlier liturgical forms” and not to others.[4]

In line with the initiative of my Venerable Predecessor Benedict XVI to invite the bishops to assess the application of the Motu Proprio Summorum Pontificum three years after its publication, the Congregation for the Doctrine of the Faith carried out a detailed consultation of the bishops in 2020. The results have been carefully considered in the light of experience that has matured during these years.

At this time, having considered the wishes expressed by the episcopate and having heard the opinion of the Congregation for the Doctrine of the Faith, I now desire, with this Apostolic Letter, to press on ever more in the constant search for ecclesial communion. Therefore, I have considered it appropriate to establish the following:

Art. 1. The liturgical books promulgated by Saint Paul VI and Saint John Paul II, in conformity with the decrees of Vatican Council II, are the unique expression of the lex orandi of the Roman Rite.

Art. 2. It belongs to the diocesan bishop, as moderator, promoter, and guardian of the whole liturgical life of the particular Church entrusted to him,[5] to regulate the liturgical celebrations of his diocese.[6] Therefore, it is his exclusive competence to authorize the use of the 1962 Roman Missal in his diocese, according to the guidelines of the Apostolic See.

Art. 3. The bishop of the diocese in which until now there exist one or more groups that celebrate according to the Missal antecedent to the reform of 1970:

§ 1. is to determine that these groups do not deny the validity and the legitimacy of the liturgical reform, dictated by Vatican Council II and the Magisterium of the Supreme Pontiffs;

§ 2. is to designate one or more locations where the faithful adherents of these groups may gather for the eucharistic celebration (not however in the parochial churches and without the erection of new personal parishes);

§ 3. to establish at the designated locations the days on which eucharistic celebrations are permitted using the Roman Missal promulgated by Saint John XXIII in 1962.[7] In these celebrations the readings are proclaimed in the vernacular language, using translations of the Sacred Scripture approved for liturgical use by the respective Episcopal Conferences;

§ 4. to appoint a priest who, as delegate of the bishop, is entrusted with these celebrations and with the pastoral care of these groups of the faithful. This priest should be suited for this responsibility, skilled in the use of the Missale Romanum antecedent to the reform of 1970, possess a knowledge of the Latin language sufficient for a thorough comprehension of the rubrics and liturgical texts, and be animated by a lively pastoral charity and by a sense of ecclesial communion. This priest should have at heart not only the correct celebration of the liturgy, but also the pastoral and spiritual care of the faithful;

§ 5. to proceed suitably to verify that the parishes canonically erected for the benefit of these faithful are effective for their spiritual growth, and to determine whether or not to retain them;

§ 6. to take care not to authorize the establishment of new groups.

Art. 4. Priests ordained after the publication of the present Motu Proprio, who wish to celebrate using the Missale Romanum of 1962, should submit a formal request to the diocesan Bishop who shall consult the Apostolic See before granting this authorization.

Art. 5. Priests who already celebrate according to the Missale Romanum of 1962 should request from the diocesan Bishop the authorization to continue to enjoy this faculty.

Art. 7. The Congregation for Divine Worship and the Discipline of the Sacraments and the Congregation for Institutes of Consecrated Life and Societies of Apostolic Life, for matters of their particular competence, exercise the authority of the Holy See with respect to the observance of these provisions.

Art. 8. Previous norms, instructions, permissions, and customs that do not conform to the provisions of the present Motu Proprio are abrogated.

Everything that I have declared in this Apostolic Letter in the form of Motu Proprio, I order to be observed in all its parts, anything else to the contrary notwithstanding, even if worthy of particular mention, and I establish that it be promulgated by way of publication in “L’Osservatore Romano”, entering immediately in force and, subsequently, that it be published in the official Commentary of the Holy See, Acta Apostolicae Sedis.

Given at Rome, at Saint John Lateran, on 16 July 2021, the liturgical Memorial of Our Lady of Mount Carmel, in the ninth year of Our Pontificate (sic). 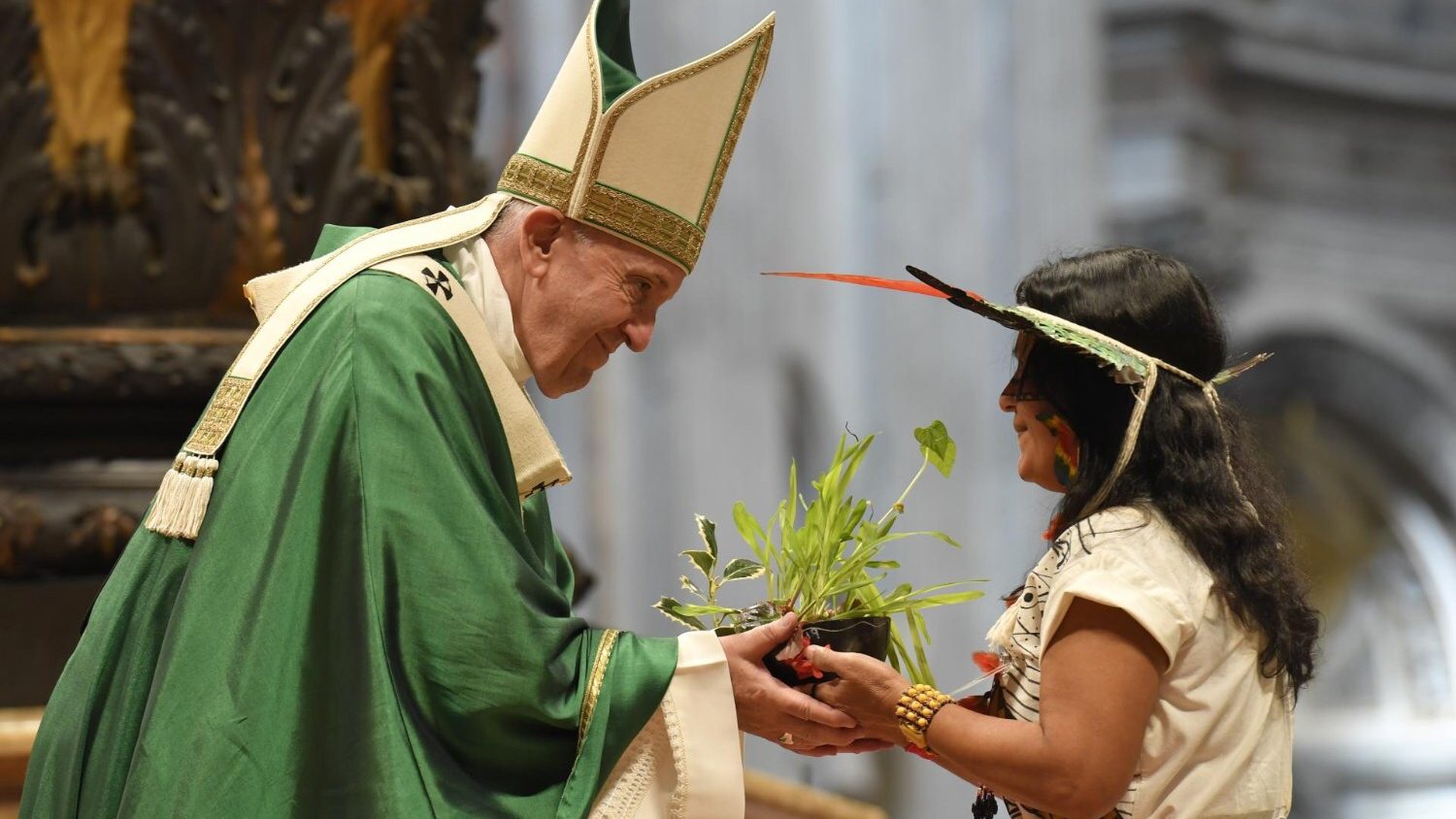 Antipope Bergoglio receiving a cursed plant representing the demon “Pachamama” from a pagan witch, which he then placed upon the high altar of St. Peter’s Basilica for the consecration of the Eucharist.