I don’t think Antipope Bergoglio is THE Antichrist – he’s WAY too dumb – but he is obviously AN Antichrist, and very well could be the False Prophet Forerunner of The Antichrist. Antipope Bergoglio and his cabal are in an open, declared war against Jesus Christ and His Holy Church. To deny this is to deny obvious, objective reality.

But man, oh man.  It’s like these guys cracked open a Bible for the first time in their lives, looked up “antichrist” in the concordance, and then said, “Hey! Let’s do all of the stuff it says The Antichrist will do!”

Let no man deceive you by any means, for unless there come a revolt first, and the man of sin be revealed, the son of perdition, Who opposeth, and is lifted up above all that is called God, or that is worshipped, so that he sitteth in the temple of God, shewing himself as if he were God.

A revolt: This revolt, or falling off, is generally understood, by the ancient fathers, of a revolt from the Roman empire, which was first to be destroyed, before the coming of Antichrist. It may, perhaps, be understood also of a revolt of many nations from the Catholic Church; which has, in part, happened already, by means of Mahomet, Luther, &c., and it may be supposed, will be more general in the days of the Antichrist.

The man of sin: Here must be meant some particular man, as is evident from the frequent repetition of the Greek article: ‘the man of sin, ‘the son of perdition, ‘the adversary or opposer. It agrees to the wicked and great Antichrist, who will come before the end of the world.

In the temple: Either that of Jerusalem which some think he will rebuild; or in some Christian church, which he will pervert to his own worship: as Mahomet has done by the churches of the east.

Okay, so this is the famous “Antichrist setting himself up over and above God” verse. The “Son of Perdition”.  The “Man of Sin”.  Check, check, checkity-check.

He said that ALL PREVIOUS magisterial statements MUST be read IN LIGHT OF Antipope Bergoglio’s heretical dumpster fire of a document, Amoris Laetitia.  And kids, the foundation of the Church’s Magisterium is, of course, the Holy Scriptures, with the Gospels, containing the very words of Our Blessed Lord and Savior Jesus Christ Himself first among them.

Look again at what Prince Cardinal Graf von Schönborn said.  He said that all that has come before must be interpreted IN LIGHT OF Antipope Francis’ “magisterial teaching”. Do you see the inversion? So the Gospels, for example Our Lord’s words on Marriage and its indissolubility in Matthew 19, must now be subordinated to the whims and spewings of this pertinacious heretic and likely apostate Antipope, Jorge Bergoglio, and his sodomite ghostwriter, Tucho “Heal Me With Your Mouth” Fernandez.

Kids, that really, really smacks of “setting oneself up over and above” Christ to me. It really sounds like Antipope Bergoglio “shewing himself as if he were God” – demanding that Bergoglio’s word supersede THE WORD.

And FYI, the gossip from Rome is that Bergoglio has handpicked and is pushing Graf von Schönborn to be his “successor”.  It was initially the Filipino Cardinal Tagle, but Bergoglio decided that Tagle isn’t up to it, and is now grooming and positioning Schönborn to carry the torch and continue the demolition of The Church, Europe, and Christian Civilization. 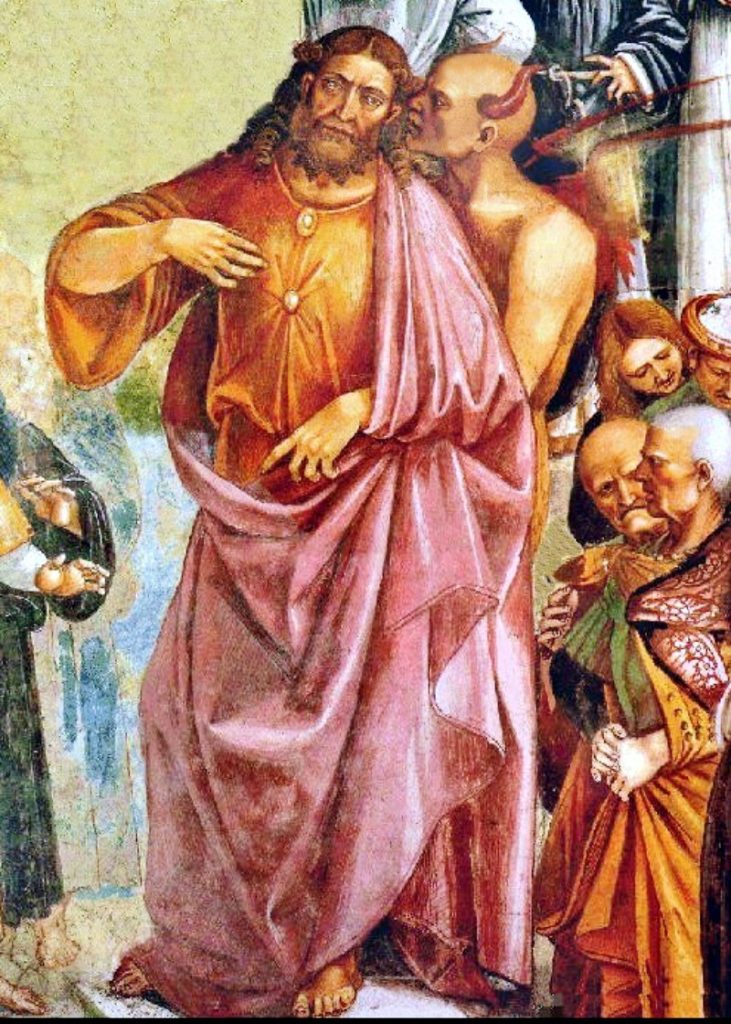 The Devil Whispering in the Ear of The Antichrist, Luca Signorelli, ARSH 1499, Chapel of St. Brice, Duomo of Orvieto, Italy