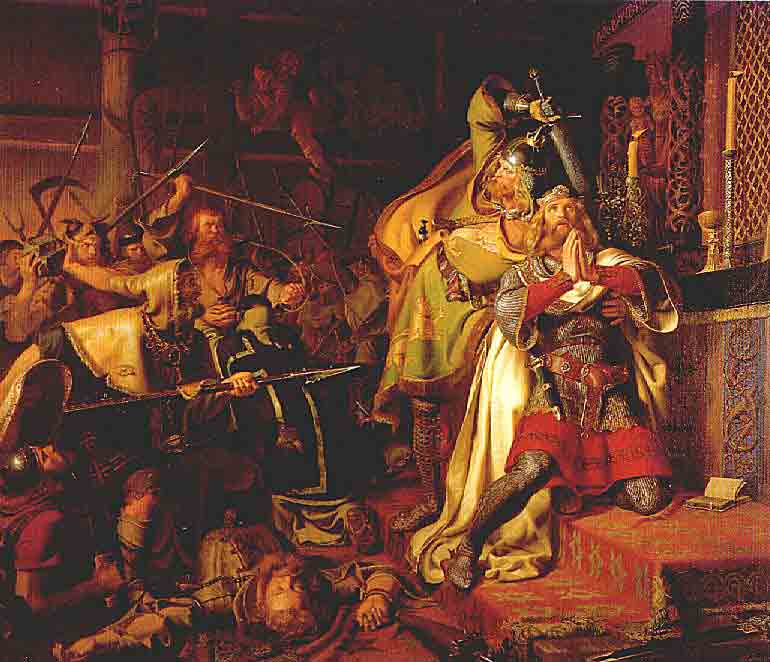 The death of Canute IV of Denmark in the Church of Saint Albanus (1086) ,Christian Albrecht von Benzon

Meet King Saint Canute IV of Denmark.  He was an extremely pious and devout Roman Catholic king who was slaughtered by his enemies in ARSH 1086 while kneeling before the altar at the Holy and August Sacrifice of the Mass being offered in the Venerable Gregorian Rite – very, very close and certainly recognizable as the VERY SAME RITE OF THE MASS being offered for you, my benefactors, this very day.

Now, according to our lord and savior jorge bergoglio (I’m just going to refer to him as that from now on, all lower-case, because let’s face it – that is who Bergoglio thinks he is), King St. Canute totally had it coming – that is, being run through the abdomen with a lance which then shattered his sacrum – being an “idolater” and “divinator” for rigidly clinging to antiquated liturgical forms that were already centuries and centuries old.  And, I mean, LOOK at him.  Look at him smugly KNEELING with his hands in that ridiculous position of faux-piety.  Who did he think he was kidding? Obviously, no one who puts on such a show could ever have a tender encounter of merciful caresses with the god of surprises (and the god of surprises is, of course, our lord and savior jorge bergoglio, and the “surprises” are whatever our lord and savior jorge bergoglio wants.)