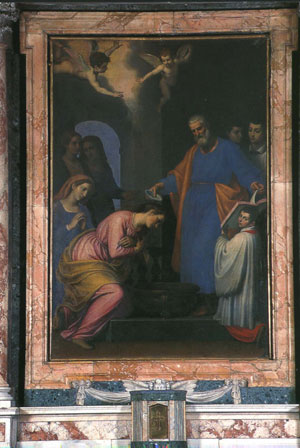 Prisca, who is also known as Priscilla, was a child martyr of the early Roman Church. Born to Christian parents of a noble family, Prisca was raised during the reign of the Roman emperor Claudius. While Claudius did not persecute Christians with the same fervor as other Roman emperors, Christians still did not practice their faith openly. In fact, Prisca’s parents went to great lengths to conceal their faith, and thus they were not suspected of being Christians.

Prisca, however, did not feel the need to take precaution. The young girl openly professed her dedication to Christ, and eventually, she was reported to the emperor….

After Bergoglio’s latest raging fit against Catholics who show any actual… CATHOLIC PIETY, going so far as to accuse Catholics who show Catholic piety of IDOLATRY AND DIVINATION, which are sins against the FIRST COMMANDMENT, when reading the martyrology of St. Prisca, a Roman girl who refused to HIDE HER CATHOLICISM, I couldn’t help but think, “Is it going to get to the point that Bergoglio actually tells the New World Order gestapos to come after us specifically? Is he going to hand them a list of fraternities, institutes, societies, monasteries and convents to arrest and ‘disappear’?”

As is textbook-typical of diabolical narcissists, Bergoglio “hates his own”, holds believing Catholics in utter contempt, and rages against them for not worshipping him and lending sufficient support to his Glorious Revolution.

Saint Prisca, pray for us.

And this is what I have to say to Bergoglio: