I taught my first Cornerstone Cattle Marketing Level 2 class in Guymon, Oklahoma something like five years ago now.  It was a spectacular group of people.  I recall being asked to discuss my thoughts on how the markets would develop (even though forecasting is a BIG no-no for a skilled marketer) with regards to the Obama regime’s economic warfare, specifically with regards to the collapse – would it be INFLATIONARY or DEFLATIONARY?

I created an entire module in the Level 2 curriculum which dealt explicitly with inflation and hyperinflation, going so far as to integrate problem sets in which the Dollar was no longer a unit of exchange.  I taught cattlemen how to trade the cash cattle markets with rounds of .223 and gallons of diesel as the baseline unit of value, in addition to using hyper-inflated prices – prices so inflated that they were completely disorienting, even to the most experienced cattle jock.  You know, like DOUBLING the price.  This module was so well-received and appreciated that I integrated it into my Level 1 curriculum, and recorded the second edition of my Level 1 DVD curriculum including the inflation module in March of ARSH 2011.

The Level 1 Cornerstone Cattle Marketing DVD set, second edition, is STILL AVAILABLE FOR SALE.  Email me for ordering instructions. They have changed.

I leaned then towards an INFLATIONARY event, because of the sheer enormity of the “money printing”, that is, debt creation, already well underway at that time.  We then discussed how a large deflation could possibly then follow, and my focus at that time was drilling into the guys (and gals) that when inflation comes, the WORST POSSIBLE THING ONE COULD DO would be to re-lever.  In other words, when inflation hits, CAPTURE THE EQUITY.  DO NOT EXPAND WITH LEVERAGE.  IF ONE HAD DEBT, USE THE WAVE OF INFLATION TO PAY DOWN OR COMPLETELY PAY OFF THE DEBT.  Then, if and when the markets deflate, the deflation will not be catastrophic.  Cash flows would continue, selling and buying back will continue, and, if the inflation was severe enough, the cattleman would be operating debt-free.

How many took my advice?  How many maintained the moral discipline to SHUN leverage, even when every “economist”, broker and agricultural loan officer was pressuring them day after day to “take advantage of the low interest rates and put that equity to work!”

Here is a 5 year continuation chart of Feeder Cattle futures, from January 2011 to today.  Please note that the price of feeder cattle in fact DOUBLED from $1.22 per pound in the spring of ARSH 2011 to $2.45 per pound in late ARSH 2014.  Then note the crash seen over the past six months. 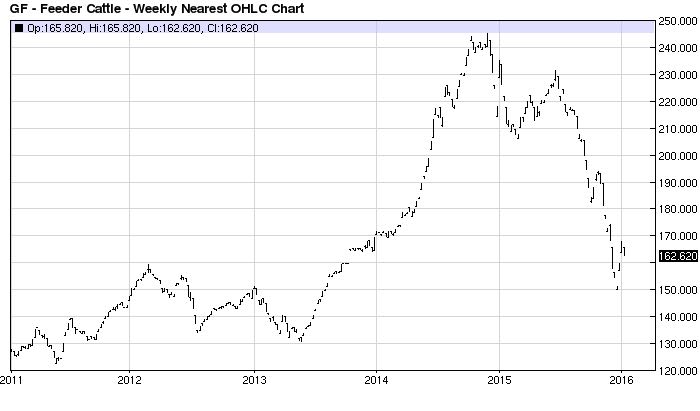 Anyone who foolishly, greedily re-levered during the inflationary period, thus COMPLETELY NEGATING THE NATURAL INFLATIONARY HEDGE OF DEALING IN A CASH FOOD COMMODITY, is now in dire, dire, dire financial straits – even though prices today are what would have been RECORD HIGH LEVELS just TWENTY-FOUR MONTHS AGO.

Guys, this is why I BEGGED you – do you remember that I literally got down on my knees and BEGGED you – to stay open on the topside, CAPTURE EQUITY and PAY OFF DEBT in an inflationary event.  Delay ALL EXPANSION until it can be done on a 100% CASH basis.

Here is what I suspect the new normal will be until there is a total civilizational collapse.  I suspect that there will be a horrific, ever-more volatile cycle of hyper inflationary followed by deflationary events for raw commodities.  As West Texas Crude probes below $30 with talk of $10, it wouldn’t surprise me one bit if a year from now crude has made new all-time highs or some such.  After which, if the world has not descended into full-blown hot war, there will be another orchestrated deflationary event, again, trying to squeeze someone, as the markets have now become a primary battlespace, driven by algorithms, funded by central banks – market players that can literally print their own money, and are thus impervious to margin calls and any cash delivery convergence. It’s all just a massive game of money-printing “chicken”, with the completely corrupt derivatives markets DRIVING the underlying cash markets.

Or as they say in Yorba Linda, “completely FUBAR.”

And if any commodity broker tries to tell you that the solution to all of this is “hedging on the Board”, just punch him as hard as you can right in the mouth.  For me.

I tried.  God knows I tried. I pray that some actually listened. Even if some did, I know it wasn’t enough to feed everyone.