So, you’ve totally heard the reportage on the time, during the last Sin-nod Against the Family, the early evening of Monday, October 12, ARSH 2015 that our lord and savior Jorge Bergoglio threw a massive, raging fit after being told of the letter sent to him by 13 Cardinals expressing their concerns about the format and goings-on at the Synod?

No?  You didn’t hear about that? You mean the press in the English speaking world suppressed this? Almost as if the press – the FREEMASONIC ATHEIST GLOBAL MEDIA JUGGERNAUT – wanted to protect the false image of Bergoglio as a “kindly old man” and not the raging diabolical narcissist thug that he is?

Well, let’s take care of that.

I am posting this because I have a contact in Rome who was told about it by a priest who WAS PHYSICALLY PRESENT IN THE DINING HALL AND HEARD IT WITH HIS OWN EARS.

Long-short, Bergoglio, when told about the 13 Cardinals’ letter immediately flew into a screaming rage, which dozens of people there present heard.  He was screaming, “If this is the case, they [the 13 cardinals] can leave. The Church does not need them. I will throw them all out!” And, repeatedly, “I’ll take their hats! I’ll take their hats!”, meaning, he would depose them, stripping them of the Cardinalcy. It was further reported that he was raging so hard that he “caught the vapors” and had a fake heart attack thing.  (No, that’s not queeny at all.  Nooo….)

Here’s the link to the Italian reportage – one of many.  It was all over the Italian press. 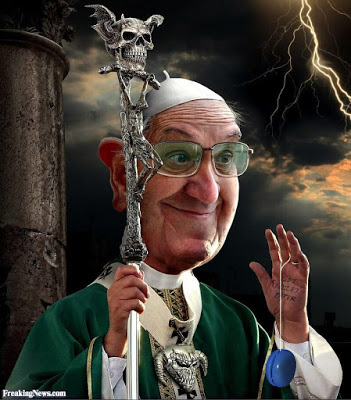 Bergoglio’s raging was so loud and so violent that the Swiss Guards CLEARED THE DINING HALL, including the priest that related/confirmed all of this to my contact in Rome.  This incident is now COMMON KNOWLEDGE in Rome – too many people eye/earwitnessed it for it not to get around.  And, it was widely reported in the Italian press, but, as I said, it was buried and suppressed in the English-speaking world.

Now, ask yourself, if Pope Benedict XVI, flawed as he was, but still, you know, a ROMAN CATHOLIC, had so much as raised his voice beyond a whisper, the entire planet would have been saturated with breathless reportage of “former Nazi” Ratzinger blah, blah, blah….

In Bergoglio, we have a genuine, full-blown diabolical narcissist tyrant THUG squatting on the See of Peter, throwing screaming rage fits and NOT. A. WORD.

You know why? Because Bergoglio is systematically destroying the Church as an institution, AND driving countless human souls into hell with his humanistic, narcissistic, nihilistic heresy.  He is doing exactly what the prince of this world, satan, and his Freemasonic, New World Order toadies want.  Priests all over the world are reporting that not only are people NOT returning to the Church, NOT returning to the sacraments, some that do come are, in fact, coming into confessionals demanding that the priest apologize TO THEM ON BEHALF OF THE CHURCH for “judging” them – CITING POPE FRANCIS AND HIS PUTRID HERESIES EVERY SINGLE TIME.

our lord and savior, Jorge Bergoglio, is, quite simply, a complete asshole.

(Coincidentally, Steve Skojec over at OnePeterFive just posted a piece on this very topic…)