(This was originally penned and posted for Memorial Day ARSH 2012, and was quite popular, and it makes a perfect post for today as all manner of pictures of Guards at the Tomb of the Unknowns during the blizzard are making the rounds, and is extremely timely given the renewed hostility toward and war against liturgical solemnity, masculinity and beauty by the infiltrators of the Church. If you love the Holy Sacrifice of the Mass, well-offered in the Venerable Gregorian Rite, or in the Rite of St. John Chrysostom (Byzantine) – ANY beautiful, licit, august, venerable and pious rite, and you want to explain WHY to an American, this essay has proven extremely effective.)

The Tomb of the Unknowns is also extremely instructive, and believe it or not, it instructs us about . . . the Mass. The reason the Tomb of the Unknowns instructs us today about the Mass is because the Tomb of the Unknowns rubrics are highly informed by the rubrics of the Mass, which were themselves informed by military rubrics, which were informed by even older liturgical rubrics. Military ceremonials and the Ceremonials of the Church are intertwined. Only since the Asteroid hit in the 1960s has the masculinity and, if I may use the term, militant aesthetic been utterly purged, in an attempt by the infiltrators to destroy the Chuch Militant from within by concealing its very nature from itself – MILITANCY. And so I am reminded of a quote I once heard:

And that is precisely what has happened, and continues to happen. The enemies and infiltrators desperately want all knowledge of WHO and WHAT the Church truly is suppressed and forgotten so that they can lyingly “tell you who you are”. And if you have no knowledge of your own history, you will have no way to discern what is truth and what is lies, and you can thus be conned into believing that you are what you are not, and deceived into believing that you are not what you in actuality are.

For those of you who have never seen a pre-1969 Tridentine Mass and are used to the clownish, degraded, irreverent Novus Ordo Masses of the last 45 years, or of Superfun Rockband church, I hope the sense of reverent awe and solemnity you feel when watching the ceremony at the Tomb of the Unknowns helps you understand what exactly it is that has been robbed from you.

After watching the ceremony at the Tomb of the Unknowns above, I want you to imagine the guards walking about casually, maybe wearing a partial uniform jacket, but with jeans and sandals. Imagine the guards walking out and introducing themselves, “Hi, my name is Lieutenant Jones, but you can call me Lieutenant Jake, or just Jake.” Then the guard might say something like, “Isn’t it a beautiful day today? It sure was rainy yesterday. I had to wear a rain jacket. I’m so glad you all could make it to my shift today. I’m going to be guarding the tomb for the next few hours, and I know that it can sure get BOOOORING! That’s why I have asked a local band to come in and play some awesome new music for you guys, because I want this to be A FUN EXPERIENCE for all of us!”

If this happened, you would be shocked and disgusted, right? Do you understand that what I have just described is a watered-down comparison of what has happened to the Holy and August Sacrifice of the Mass? The Mass went from being even more reverent than the rubrics of the Tomb Guard to what I just described above – and many times even worse than what I described above. And this happened for many people within a span of several WEEKS in late 1969 into early 1970.

The soldiers are in full dress uniform, meticulously turned-out and maintained. They are not in combat gear that soldiers would use to walk a patrol in Afghanistan. The Tomb guards are doing something DIFFERENT, and thus their uniforms reflect that. Really, what the ceremonies surrounding the Tomb are is the highest form of ART. It is living ART, not consisting of a mere two-dimensional representation, not consisting of inanimate objects, but ART consisting of human beings in action. The uniforms, the gait, the precise rubrics, words, gestures and movements – these all combine into a perpetual work of art that not only moves and inspires the people who witness it, but also accomplishes the goal of making tangible a RESPECT for and a REMEMBRANCE of all of the fallen unknown soldiers. The Tomb Guards walk their patrol whether anyone is there to see them do it or not. It isn’t a show. It is a service. It is a liturgy. 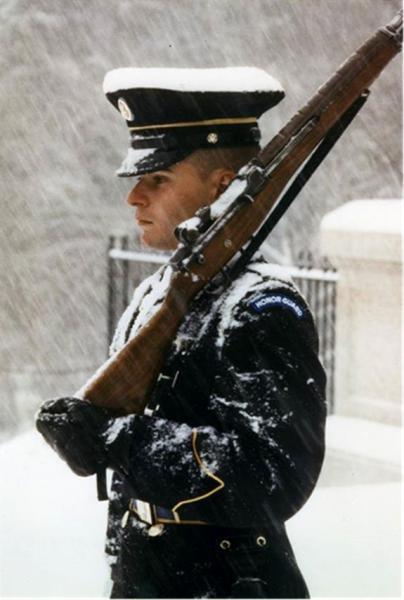 It isn’t all about him. For real men, it never is.

The Holy Sacrifice of the Mass is exactly what I just described, except that the Mass is the most perfect artistic action in the universe because the Mass is the artistic creation of God Himself. The Mass is SUPERNATURAL ART. The Holy Spirit taught the Church the Mass. The Mass is art that is so perfect that it actually causes something SUPERNATURAL to happen – it causes Heaven and Earth to touch, it causes time to be bent such that the moment of “now” touches and intersects with the moment of Calvary 1981 years ago, and it causes bread and wine to be transubstantiated into the Body, Blood, Soul and Divinity of Jesus Christ, made PHYSICALLY SUBSTANTIALLY PRESENT. Man calls down God, and God, in His infinite love, responds and fully submits in complete love, making Himself present on the Altar both at the moment of His death, and in His resurrection, so that He may go into us not only spiritually but also physically as Food.

-Priests are also supposed to walk with a very deliberate gait – slow, measured and reverent in exactly the same way the Tomb Guards walk in a slow, deliberate, reverent gait.

-Priests are only supposed to say very specific words – no improvisation, no modifications. The Guards are the same way. They have a very strict announcement that they make at the changing, and they have very strict words that they say when telling people to be quiet and observe reverent silence (there is a YouTube video of that happening, look it up.) There is no chatting or extemporaneous speech. In the Church, the command is “Say the black, do the red,” in reference to the layout of the Roman Missal with the words of prayer in black and the instructions for the intensely precise rubrics, down to every gesture, in red.

-I would analogize the exaggerated heel-clicking movement that the Guards do to the genuflecting of the Priest (and servers, and laity, ahem) to the rubric of ALWAYS genuflecting to the right knee EACH AND EVERY TIME the axis of the Tabernacle is crossed. In many Catholic Churches, the Tabernacle, which is the center of the Church – heck, it is the center of the universe – has been moved off to the side, or even hidden in a sacristy. Where a Tabernacle is present, Our Lord, physically present inside, is largely ignored. I have never seen a Novus Ordo priest consistently observe the loving rubric of genuflecting to the Tabernacle every time the plane is crossed. (I have learned since originally writing this that the General Instruction of the Roman Missal for the Novus Ordo Mass states that there are to be no genuflections to the Blessed Sacrament except by the priest at the consecrations. Sit in stillness with this for a moment. Do you see why I say that the Novus Ordo was conceived in malice by the infiltrators, and thus cannot be “fixed”?)

Our Lord, Crucified, Risen and physically substantially present to us deserves INFINITELY MORE excellence, beauty, solemnity, reverence, discipline and dignity in His Mass.