Thank you for your podcast from All Souls Day. It was a delight to find one again so soon, thanks to Nurse Claire & Dr. Beep.

I applaud all the main points y’all delivered home with such finesse and aplomb!

Just want to say… I was sucked up into the Q delusion, introduced to it by a Catholic friend, clung to it as the election was stolen and months into the year following, until its sheer implausibly finally dawned upon me and I began recognizing it as a massively, cleverly, orchestrated, cruel psychological campaign, whose intent was to pacify and mollify — apparently in the same way the Marxists did after the 1917 revolution with whispered propaganda campaigns for the purpose of gaining time so that they’d be unhindered in their operation to solidify control. Neutralizing, soothing and obtaining inaction from those citizens who would have vigorously and patriotically opposed their takeover of Russia — they psychologically held them at bay — given a false hope to just be patient, ‘hold out: deliverance is coming’, wait — all while tyrannical power was consolidated.

I am amazed it has continued and from what y’all reported, it has totally crippled people’s intellects and wills — delivering them lockstep into sheer insanity! I couldn’t help thinking as I listened that only the CIA with its massive expertise in torture and mind control could have pulled such off such a stunt, with such brilliant results — producing so many walking fools! Truly, it stemmed from a clever idolization of Savior Trump!! — who may well have been but the latest actor in the masonic parade of controlled theatre.

Gratefully, I bailed out, and prefer to acknowledge the bitter realities. My dear friend still clings to an excessively false hope that “white hats” will bring about the Triumph of Mary!! Truly, the Triumph will come, but the agents will not be within the government or parallel government of the United States of America — or I will eat my entire collection of hats!! 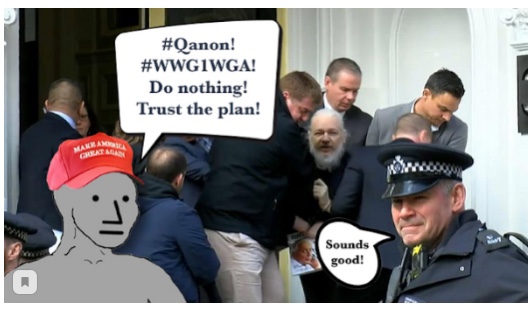