Q:  Ann, how can you go to a Mass in which a man you are beyond morally certain is an Antipope is commemorated at the Te Igitur?

First and foremost, because the Mass is VALID (which it is – don’t believe anyone who tells you otherwise), and Our Lord comes down on the altar and the Eucharist is validly confected – ’nuff said: I’m there.  Jesus is there?  Roger.  Give me vectors. I’m on approach.

I have what many moderns, and especially the anti-convert Trad, Inc. contingent disdain as a “Protestant convert thing”, that is, “A PERSONAL RELATIONSHIP WITH JESUS CHRIST”.  This does NOT make a “me ‘n’ Jesus to-the-exclusion-of-everyone-else” relationship – quite the opposite.  Just as when friends (or couples courting) meet and each is very desirous of meeting the other’s friends, such is the case with Our Lord.  But at the peak and center of this dynamic is OUR LORD, NOT THE CLIQUE.  For now, I have a wonderful Tridentine Mass available to me daily, and as a backup, I have a Sunday Divine Liturgy at a Ukie Catholic parish also within easy walking distance.  The only problem is the commemoration of the Antipope – but, let me explain my position on that.

I do not hate or think evil the priests who commemorate Antipope Bergoglio, nor the faithful who assist at those Masses.  I do not think that they are heretics or schismatics or “crazy”.  I think that they are mistaken, and ignorant of the facts in evidence, and IF they are aware of my writings and video on the subject (which I don’t know – I do not discuss these things with them – I talk to my parish priests but rarely, mostly to protect them, and I go to confession elsewhere), then I assume, in charity, that they are scared shitless, and also observing any obedience that they are under.

At the Te Igitur of a Mass in which Bergoglio is mistakenly commemorated, consider asking Our Lord to give you any temporal punishment, if any, that your priest might be incurring by mistakenly commemorating an Antipope at the Te Igitur, as I started doing several years ago, in imitation of Our Lord in the Garden. “Oddly”, doing this makes assisting at Mass even more awesome and profitable, and enflames tremendous compassion toward priests today, so many of whom are frightened, confused and internally conflicted by the Bergoglian Antipapacy.

I used to be a commodity broker, but I think that now looking back, it is clear that my true vocation is that of a teacher.  But the role of a teacher can manifest in many ways and formats.  One of the things that makes a person a truly good and effective teacher is EMPATHY (fruit of the Second Joyful Mystery, The Visitation, FRATERNAL Charity, Love of Neighbor).  A good teacher must be able to put themselves in the shoes of their students – to be able to remember what it was like to NOT HAVE the information being presented, to be able to understand MISUNDERSTANDINGS, and to anticipate questions.

Being not just able to do this, but KEENLY able to do this, I can TOTALLY understand why almost everyone initially simply took the word of the College of Cardinals.  It’s an understandable mistake to have made. I myself didn’t reach public moral certainty on the fact that Bergoglio was an Antipope and Pope Benedict had never validly resigned until June of ARSH 2016, over three years into the Antipapacy.

Something that has lingered in my mind since I was a child was this question: Had you (Ann) been alive when Our Lord walked the earth, had you (Ann) been one of the Women of Jerusalem, WOULD YOU (ANN) HAVE RECOGNIZED OUR LORD, or would you (Ann) have gone along with the Sanhedrin and the people and condemned Our Lord as just another paranoid schizophrenic with delusions of divinity?

Folks, the answer to that question makes me tremble.  TREMBLE. This has gnawed at me since WAY before Antipope Bergoglio, and WAY before even entering the Church.

I have people that email me regularly that are paranoid schizophrenics that claim visions of God, being a demiurge, or of being god himself.  I have a VERY sensitive bee-ess detector.  I think James Randi is a national treasure.  I am, by nature, a skeptic.

Here’s what I do know, and I am admittedly moved to tears as I type this:

Every day at Mass, even though Bergoglio is commemorated at the Te Igitur, when the Chalice is consecrated, and the priest elevates the Precious Blood, I bow my head and say EXACTLY what the Jews in Pontius Pilate’s courtyard screamed: “Let His Blood be upon us, and upon our children!”

And so, I have spent many, many hours in prayer before Our Lord in the Tabernacle, more often than not with the Rosary in my hand, thinking about THESE DAYS, and applying the lessons of the Gospel, specifically what people who were eyewitnesses to Our Lord’s earthly ministry nearly 2000 years ago went through.  How did Joseph of Arimathea do it?  How did Nicodemus do it?  How did Claudia Procles, Pontius Pilate’s wife, do it? Could I possibly, possibly, ever be able to do the same?  Or would I take one look at Our Lord and blow Him and His Gospel off just as I blow off the actually mentally ill people who land in my email box every day?  Or the fools passed off as “saviors” in the mainstream culture? Would Our Lord’s miracles HAVE BEEN ENOUGH FOR ME?

Again, I tremble at the thought.

I go back to Our Lord’s words to the disciples of John the Baptist who came specifically to ask Him, “Are You the Messiah?”  “And answering, He said to them: Go and relate to John what you have heard and seen: the blind see, the lame walk, the lepers are made clean, the deaf hear, the dead rise again, to the poor the gospel is preached: And blessed is he whosoever shall not be scandalized in Me.”

And again in the Good Shepherd Discourse: “Amen, amen I say to you: He that entereth not by the door into the sheepfold, but climbeth up another way, the same is a thief and a robber. But he that entereth in by the door is the shepherd of the sheep.  To him the porter openeth; and the sheep hear his voice: and he calleth his own sheep by name, and leadeth them out. And when he hath let out his own sheep, he goeth before them: and the sheep follow him, because they know his voice. But a stranger they follow not, but fly from him, because they know not the voice of strangers.”

“I AM the Good Shepherd. The Good Shepherd giveth his life for His sheep.  But the hireling, and he that is not The Shepherd, whose own the sheep are not, seeth the wolf coming, and leaveth the sheep, and flieth: and the wolf catcheth, and scattereth the sheep:  And the hireling flieth, because he is a hireling: and he hath no care for the sheep.  I AM the Good Shepherd; and I know mine, and mine know Me.  As the Father knoweth Me, and I know the Father: and I lay down my life for My sheep. And other sheep I have, that are not of this fold: them also I must bring, and they shall hear My voice, and there shall be one fold and One Shepherd.”

The key concept here is the discernment of the voice, and we know that this is at least to some degree an INDIVIDUAL discernment from Our Lord’s words “BY NAME”.  This is in no way a “dogmatic demand” that the sheep appeal only to “authority”.  It is EXACTLY the opposite.  It is a warning AGAINST mindlessly appealing to “authority”, and also to “the mob” as sheep are very, very wont to do.  There are sheep who will be abandoned and/or deceived by the faithless hirelings and in their paralysis will be easy prey for the wolves.  But the sheep that the Good Shepherd CALLS BY NAME, will be able, because they know His Voice, to discern, and will be able to move proactively AGAINST the rest of the flock, AGAINST the commands of the faithless hirelings and the wolves, and will be able to always see and know the Good Shepherd, and follow only Him. Because when you have a “personal relationship” with Someone, you know the sound of His Voice.

So.  Do I hate the other sheep that are walking toward the Voice of the Stranger? No.  Of course not.  And neither does Our Lord.  What I am doing, and will continue to do, is walk toward the Good Shepherd, while BAAAA-ING over my shoulder all the way to my flock mates, and even in an attempt to notify the hirelings.  Often, shepherds are notified of the approach of a wolf, or any danger, BY THE SHEEP THEMSELVES. BAA! BAAAA! BAAAAAAA! Or, maybe I’m just blessed enough to be an Akbash Sheepdog bitch, a noble beast that the shepherd uses to help keep an eye out for wolves, and to alert and protect the sheep.  Maybe I am called, like the Akbash Sheepdog to CHARGE INTO THE WOLFPACK and help get as many sheep away from danger as possible. 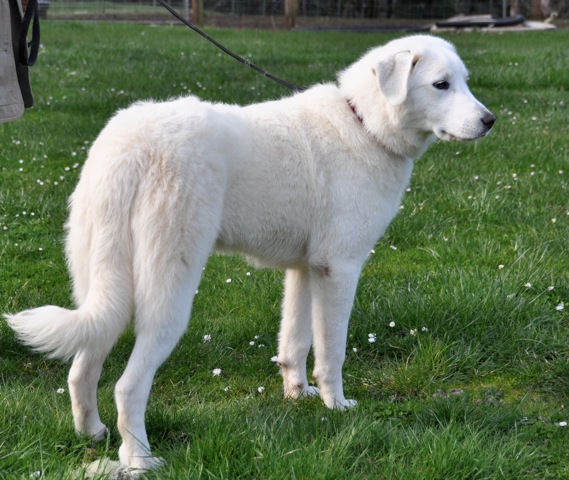 If a damn dog can understand that the oblivious, mistaken and/or deceived sheep are not the enemy, and charge the enemy to defend them, how could I not do the same?  Do I not have superior capacities of discernment, and do I not have the capacity for empathy? Would a DOG demand that his human superiors act to defend the sheepfold before he, the DOG, acted?  And if his masters turned out to be “faithless hirelings”, would a DOG walk off in some sort of effeminate protest? Would a DOG engage in an erroneous calculus of Consequentialism or Proportionalism?

The oblivious, mistaken and/or deceived sheep are not the enemy – they are the victims.  Even if they are priests.  Or bishops.  Or Cardinals.  And so we work to help them perhaps see the objective evidence, the law, and then to themselves discern the Voice of the Shepherd and run towards Him.  And, if they don’t see, maybe that means that I am not doing ENOUGH.  I should BARK LOUDER.

The only way this will happen is by staying CLOSE to Our Eucharistic Lord, the Good Shepherd, MOST ESPECIALLY in these darkest of days, which may well be the run-up the the Big Show.

For the record, for any and all, and to whom it may concern:

THE ONLY WAY I STOP GOING TO MASS, THE HOLY AND AUGUST SACRIFICE OF CALVARY, VALIDLY OFFERED, IS BY IMPRISONMENT OR DEATH.

If there is any part of “VALIDLY OFFERED”, “IMPRISONMENT” or “DEATH” that you don’t understand, then… woof?

I hope this answers the question, and helps.

Our Lady of Copacabana, pray for us.