I’ve been reading your site and find your writing very edifying and helpful in these difficult times we live in. Of particular interest to me is your thesis that Jorge Bergoglio is not the legitimate successor of St. Peter.

While trying to understand the arguments you make to support this thesis, it has been very interesting to read about how Pope Benedict XVI believed he could somehow expand the Papacy. (see your article here: https://www.barnhardt.biz/2022/06/01/hey-remember-when-ganswein-doubled-down-on-his-20-may-2016-speech-a-week-later/) As you assert in another article, I believe that the Papacy was instituted by Jesus Christ himself and is therefore immutable. https://www.barnhardt.biz/2022/05/25/the-papacy-is/

Here’s my question: How do we know that Benedict XVI was in error when saying that the Papacy could not be changed in this way? What aspects of the Papacy are immutable and which ones are changeable? If any kind of ‘expansion’ is theologically possible, then would Jorge Bergoglio be a legitimate ‘participant’ in the Papacy and not an antipope? I’m asking in good faith to try to understand the argument better.

I appreciate your consideration. God bless your work. Please pray for me and for the conversion of my non-Catholic family.

Great question, E! This is a cross post of a piece that NonVeni Mark actually put together several years ago which answers your question directly. -AB

The following is a guest post by Mr. Mark Docherty of the NonVeniPacem Blog.

Note well the two-pronged attack on error, via proper Authority and Jurisdiction, woven throughout this quote:

“We therefore teach and declare that, according to the testimony of the Gospel, the primacy of jurisdiction over the universal Church of God was immediately and directly promised and given to Blessed Peter the Apostle by Christ the Lord.

“For it was to Simon alone, to whom he had already said, “You shall be called Cephas” (John 1:42), that the Lord, after the confession made by him, saying, “You are the Christ, the Son of the living God”, addressed these solemn words: “Blessed are you, Simon son of Jonah. For flesh and blood has not revealed this to you, but my Father, who is in heaven. And I say to you, that you are Peter, and upon this rock I will build my Church, and the gates of Hell shall not prevail against it. And I will give you the keys of the kingdom of heaven. And whatever you shall bind on earth shall be bound, even in heaven. And whatever you shall release on earth shall be released, even in heaven.” (Mt 16:16-19).

“And it was upon Simon alone that Jesus, after His Resurrection, bestowed the jurisdiction of Chief Pastor and Ruler over all His fold, by the words: “Feed my lambs. Feed my sheep.” (John 21:15-17).

“At open variance with this clear doctrine of Holy Scripture, as it has ever been understood by the Catholic Church, are the perverse opinions of those who, while they distort the form of government established by Christ the Lord in His Church, deny that Peter, in his single person, preferably to all the other Apostles, whether taken separately or together, was endowed by Christ with a true and proper primacy of jurisdiction; or of those who assert that the same primacy was not bestowed immediately and directly upon Blessed Peter himself, but upon the Church, and through the Church on Peter as her Minister.

If anyone, therefore, shall say that Blessed Peter the Apostle was not appointed the Prince of all the Apostles and the visible Head of the whole Church Militant; or that the same, directly and immediately, received from the same, Our Lord Jesus Christ, a primacy of honor only, and not of true and proper jurisdiction; let him be anathema.
Pope Pius IX, PASTOR AETERNUS, 18 July 1870

What can we learn from this?

-Since it was established by God Himself, it is immutable; not to be messed with in any way, no matter what the majority of 1960s German theologians thought HERE

-The Papacy was then, is now, and ever shall be until the consummation of the world, a Divinely Instituted Monarchy with full and universal power

-The transfer of the keys is conferred directly from Christ to Peter and to his successors (not through the cardinals, not upon the Church, nor through the Church to Peter… if at one time this seemed like a distinction without consequence, recent events have borne out its extreme importance)

Let’s assume for a moment for the sake of argument that the 2013 “conclave and election” were valid, in the sense that Benedict’s failed partial abdication was not at issue. Let’s say the Cardinal electors followed all the rules, and voted legitimately. But the man they elected is an arch-heretic Marxist masonic non-Catholic, avowed enemy of the faith, who operates only in the material, non-supernatural realm of politics, economics, sociology, and ecology, extolling mankind to strive towards an earthly utopia as the ultimate good.

If that were to happen, is Christ really bound to confer the crown? While we have had awful, immoral, degenerate popes in the past, we have never, ever had a man like this one-world government, one-world religion poseur, squatting on the Chair of St. Peter. Never.

Now if the election/conclave were invalid, or in fact was not merely invalid, due to some procedural violations of UDG 81/82, but did not even take place, what would that mean? Would Christ transfer the keys to a man who was faux-elected in a faux-conclave that didn’t really take place? We are talking about ontological reality, not appearances. Sometimes appearances have nothing to do with reality, because as we learned, “An act of deception, no matter how cleverly conceived or convincingly executed, cannot change the objective reality of a given situation” HERE.

If then they say that the super-majority (it’s certainly not “universal acceptance”) didn’t directly CAUSE the “resignation” to be valid nor CAUSE the subsequent “election” to be valid, but rather they invert the premise and say that the visible existence of the super-majority, while not causal, is in fact the PROOF SET of God accepting and acting, well then they would be claiming that the will of men forces the hand of God. God has NO CHOICE, and must act in accord with mob rule.Either this, or else they would have to claim that no no no, God accepts and acts on his own, of course, but then imposes His decision onto the minds of the super-majority, overriding their individual free will, and thus forcing the result of Universal Acceptance, in some sort of divine brainwashing.

Note well, canon 332.2 is not a general norm, nor some kind of obscure/arcane law, but rather deals precisely with the occasion of a pope choosing to resign, and the required conditions for the validly of the resignation.

The majority of the Catholic world is operating as if this canon does not exist or does not matter:

This tells us that:

-A papal abdication depends upon the free and proper manifestation of the resignation itself.

-The Cardinals have no authority to “accept” said resignation – their acceptance or rejection of the resignation has zero bearing the on the ontological reality of its validity; rather, its validity depends on it being freely and properly manifested. Christ is the arbiter, and Christ has bound Himself to the Law specifically to preclude the possibility of an “unknowable chaos” and guarantee the visibility of the Church, including at its earthly head.

We also have canon 188 fully in play in this matter, as there is a mountain of evidence that Benedict intended to create, and today believes he is participating in, an “Expanded Petrine Ministry,” which would be a most colossal “substantial error:”

Can. 188. A resignation made out of grave fear that is inflicted unjustly or out of malice, substantial error, or simony is invalid by the law itself.

-Whatever his reasons, Pope Benedict did not resign the Munus in his Latin Declaratio

-Pope Benedict (in his mind) created, defined, and executed his future role, which should have been at the sole discretion of the new Supreme Pontiff, had one actually been elected

-“Pope Emeritus” is not a real thing, is not provided for anywhere in canon law, and is an impossibility: When a bishop retires his office and becomes an ‘emeritus’ per can. 402.1, he becomes bishop emeritus of his diocese precisely because he remains a bishop but without the office…one cannot “remain pope” without the office

Benedict demonstrates his continued pontifical duties in various ways, including writing books and granting interviews, refusing to live in seclusion, imparting “MY Apostolic Blessing”, addressed as His Holiness, continuing to sign correspondence “HHPBXVI,” wearing the papal garb (because ahem “no other clothes were available”), prevented the fisherman’s ring from being destroyed, newly minted Cardinals are brought before him for his blessing…

-Benedict testified numerous times about his belief in the indelible nature of accepting the papacy, once pope always pope, that he is not fleeing but remaining “in a new way” in the enclosure of St. Peter, to fulfill the “essential spiritual nature” of the papacy as its contemplative participant, while delegating the governance aspect to the active participant

-All of the above point to an invalid non-resignation of the Munus per can. 332.2, and by “substantial error” per can. 188, and subsequently a “conclave” and “election” in March of 2013 that never happened. This is not a conspiracy theory, it’s not crazy, it’s not schismatic. It’s the truth.

I (Mark Docherty) don’t have a degree in canon law, nor any advanced degrees of any kind. I have a diploma from a public high school and a B.S. in Food Marketing (from a Jesuit institution, no less… AMDG, y’all). But I can tell you this: Words have meaning; in the law, and in actions. That words are to be taken at face value, both in the law and in specific acts, is actually part of canon law (more to come on this). Everything presented here is done so according to the plain meaning of words, and you don’t need to be a genius to decipher it. Otherwise, it would be Gnosticism.

I’ll leave you with this little bit from the Catechism of the Catholic Church:

675 Before Christ’s second coming the Church must pass through a final trial that will shake the faith of many believers.574 The persecution that accompanies her pilgrimage on earth575 will unveil the “mystery of iniquity” in the form of a religious deception offering men an apparent solution to their problems at the price of apostasy from the truth. The supreme religious deception is that of the Antichrist, a pseudo-messianism by which man glorifies himself in place of God and of his Messiah come in the flesh.576
676 The Antichrist’s deception already begins to take shape in the world every time the claim is made to realize within history that messianic hope which can only be realized beyond history through the eschatological judgment. The Church has rejected even modified forms of this falsification of the kingdom to come under the name of millenarianism,577 especially the “intrinsically perverse” political form of a secular messianism.578
677 The Church will enter the glory of the kingdom only through this final Passover, when she will follow her Lord in his death and Resurrection.579 The kingdom will be fulfilled, then, not by a historic triumph of the Church through a progressive ascendancy, but only by God’s victory over the final unleashing of evil, which will cause his Bride to come down from heaven.580 God’s triumph over the revolt of evil will take the form of the Last Judgment after the final cosmic upheaval of this passing world.581 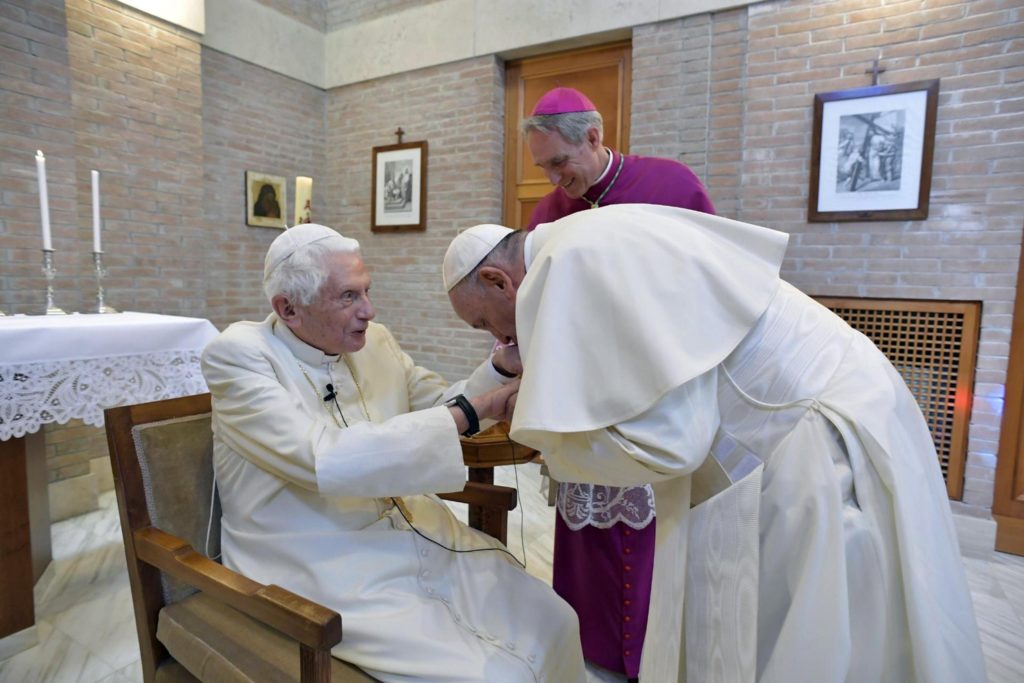 The Fauxp reverencing the Pope, while the Pope’s warden looks on.