You HAVE read J. Michael Miller’s ARSH 1979 dissertation, “The Divine Right of the Papacy in Recent Ecumenical Theology” of course, HAVEN’T YOU?  It is a Rosetta Stone-esque synthesis of the massive Teutonic Theological Academy’s writings in the mid-20th century on the “need” to “fundamentally transform” the irrelevant, illegitimate and expired Monarchical model of the Papacy by essentially dissolving the Petrine Office into a collegial, synodal Petrine Ministry or Function.  Why?  To appease the Lutherans (and Anglicans to a lesser degree) of course! And to conform the Papacy to the new, modern, democratized world!

And also, if we’re going to be perfectly blunt, because the Freemasons need the Papacy destroyed in order to bring their “one world religion” and one world government, together referred to as the “New World Order”, to fruition.  The number one target of the Freemasons since their formation in London in ARSH 1717 has been the Papacy.  All wars and revolutions instigated by Freemasonry over the past 300 years have had as a key objective the elimination of monarchy from the face of the earth, precisely as a stepping stone to the REAL GOAL of eliminating the Papacy. American Revolution. French Revolution. Italian Revolution. World War I.  Etc.

Perhaps it would help to define some terms.  So, some definitions, just for those who might not have actually read or watched anything I have presented on the topic of the Bergoglian Antipapacy, but are reading this:

THE PAPACY IS IRREVERSIBLE:  This means that the Papacy can not be ABOLISHED.  In reading the Miller dissertation, and then the rest of the Teutonic Academic writings of the late 20th century, one sees the argumentation of the far-left, with Hans Kung and Johannes Neumann at Tubingen in the 1960s (contemporaneously with Ratzinger) at the forefront, that the Papacy could and should be ABOLISHED ENTIRELY, that the Papacy is “reversible”.  The total abolition (reversal) of the Papacy is what the question of Irreversibilty addresses.  It has NOTHING to do with Papal resignations. Relative “moderates” such as Walter Kasper and Karl Rahner argued that total abolition would be too aggressive a play, and that the Papacy should rather be “demythologized” by being gradually essentially dissolved from an Office into a broad collegial synodal ministry, which is essentially the Lutheran model.  This is referred to as the Hypothesis of Dissolution.

THE PAPACY IS IMMUTABLE:  This means that the Papacy cannot be changed from the Monarchical form established by Jesus Christ Himself.  The Teutonic Theological Academy of the late 20th century from Walter Kasper to Karl Rahner to Joseph Ratzinger broadly agreed that the Papacy was mutable, that is, CHANGEABLE, and should be changed to “update” it and make it “relevant to a modern, democratized world” and to appease schismatics.  This error of “demythologization” is the soil from which Pope Benedict XVI Ratzinger’s Substantial Error of February ARSH 2013 grew, and is how it came to pass that he proffered an attempted PARTIAL resignation with the intention of “fundamentally transforming the Petrine Office into a collegial, synodal, shared ministry consisting of an active member and a passive, contemplative member”, which thus rendered the attempt invalid by the law itself per Canon 188, thus resulting in the See never being vacated.  Thus, per Canon 332.2 which states that the College of Cardinals have NO AUTHORITY with regards to Papal Resignations, the only determiner of validity being Canon Law itself, a completely invalid, non-canonical, UNREAL, faux-conclave was what what was convened in March of ARSH 2013, and spewed forth from its deepest bowels Antipope Jorge Mario Bergoglio.

Petrine OFFICE:  The Petrine Office (munus) is a state of BEING.  Joseph Ratzinger IS the Pope.  George Washington WAS the first President of the United States.  When Queen Elizabeth dies, Price Charles WILL BE the King of England.  In order to resign an OFFICE, one must resign BEING the Officeholder.  One cannot resign an Office by declaring that one will no longer exercise a specific activity that derives from that Office.  One cannot resign the Presidency by declaring that one will no longer exercise the duties of Commander in Chief, but will continue to come to the White House every day, be called “Mr. President”, deliver the State of the Union address, and issue Presidential pardons.

Petrine MINISTRY: The Petrine Ministry (ministerium) is a collection of ACTIVITIES that are derivative of the Petrine Office.  The exercise of the Petrine Ministry (sometimes called “Petrine FUNCTION” by the Teutonic Theological Academy) is NOT required in order to hold the Petrine Office.  We know this from logic, because a man who is stricken with illness (as most men are at the end of life), in a coma (as Pope JPII was in the hours after he was shot), or imprisoned (as numerous Popes have been) and are thus totally incapable of carrying out the MINISTERIAL ACTIVITIES of the Papacy, such as teaching, legislating, adjudicating and presiding, DO NOT LOSE THEIR OFFICE.  It is impossible – IMPOSSIBLE – to argue honestly that “Office” and “Ministry” are synonymous, MOST ESPECIALLY IN THE LEGAL SENSE, because the two words belong to two completely different categories: BEING (office), and DOING (ministry).  This is why Canon 332.2 explicitly states that a Papal resignation MUST resign the MUNUS, which is at its root simply a recapitulation of the Natural Law (aka COMMON SENSE). Saying, “I’m not going to answer the phone anymore, I’ll stand aside so someone else can do that, but I’ll still be here…” is NOT resigning. In the case of the Papacy, no valid resignation, NO VALID CONCLAVE POSSIBLE. Period.

Click on the image below to purchase for only ten bucks or so the electronic version of the Miller Dissertation.  Because, WHY WOULDN’T YOU??? 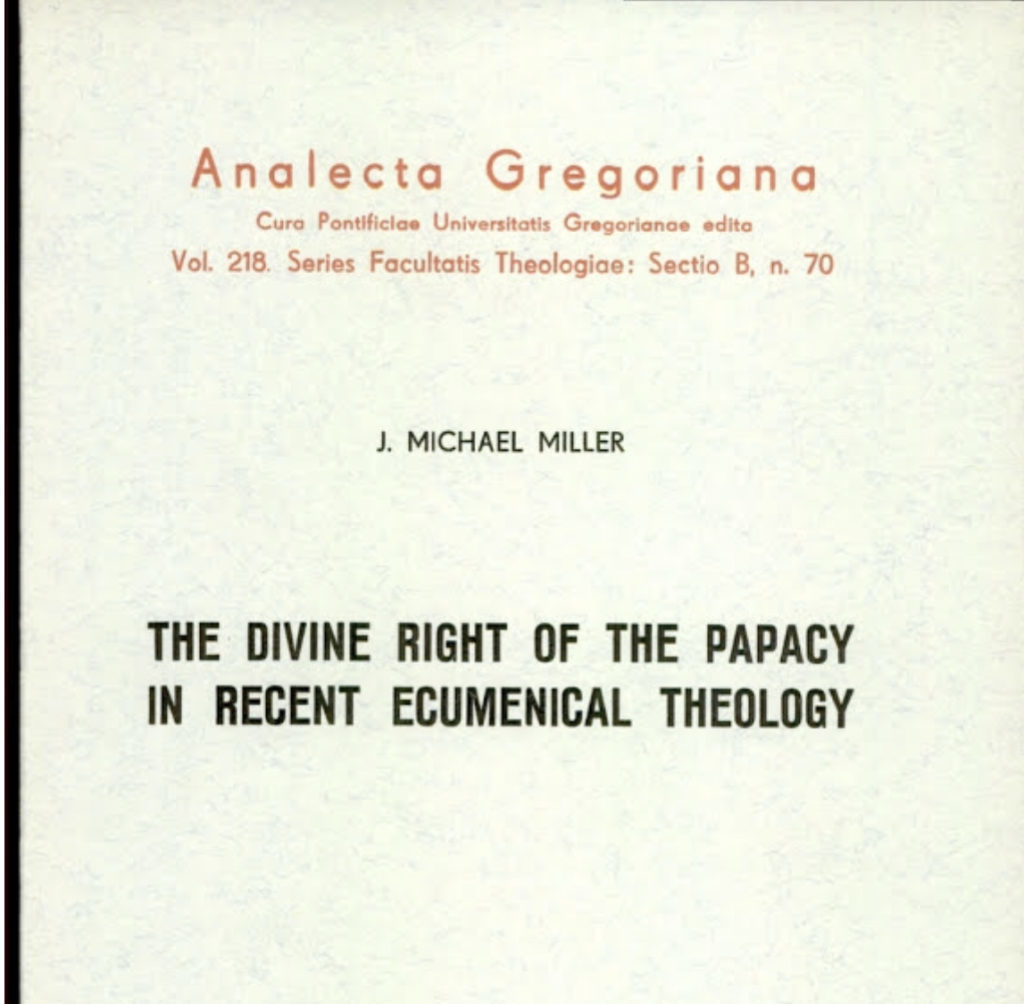