(As you read this, the parallels to the NewWorldOrder/Deep State/Coviet Union are obvious, but ALSO appreciate how precise it is in its application to Antipope Bergoglio and the Antichurch occupying the Vatican.  Where women/feminine are referenced, think “sodomites”.  Every paragraph here applies DIRECTLY to Antipope Bergoglio and his coven of demon fags.  Shamelessly lifted from AmericanDigest.org) 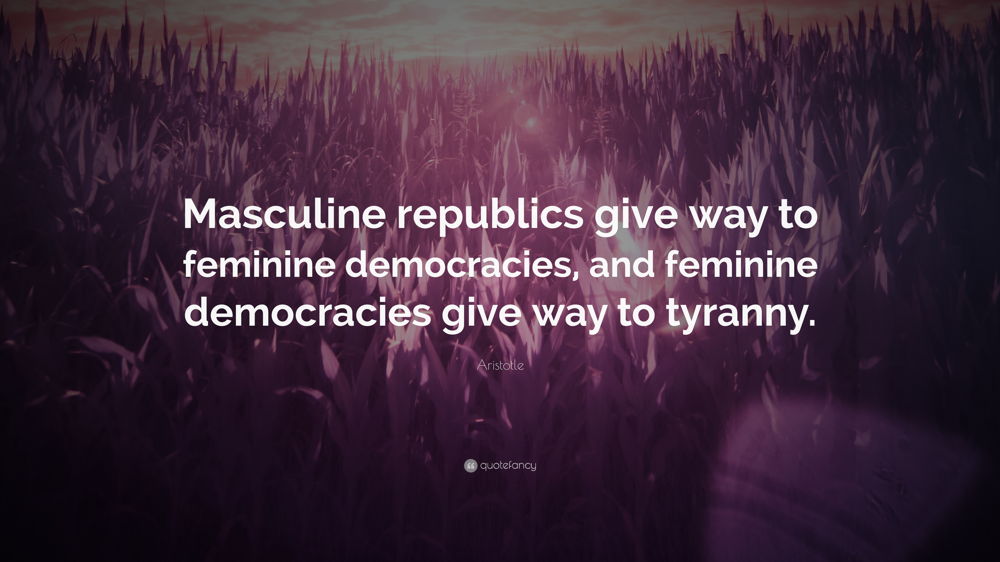 As to tyrannies, they are preserved in two most opposite ways. One of them is the old traditional method in which most tyrants administer their government. Of such arts, Periander of Corinth is said to have been the great master, and many similar devices may be gathered from the Persians in the administration of their government. There are firstly the prescriptions mentioned some distance back, for the preservation of a tyranny, in so far as this is possible; viz., that the tyrant should lop off those who are too high; he must put to death men of spirit; he must not allow common meals, clubs, education, and the like; he must be upon his guard against anything which is likely to inspire either courage or confidence among his subjects; he must prohibit literary assemblies or other meetings for discussion, and he must take every means to prevent people from knowing one another (for acquaintance begets mutual confidence).

Further, he must compel all persons staying in the city to appear in public and live at his gates; then he will know what they are doing: if they are always kept under, they will learn to be humble. In short, he should practice these and the like Persian and barbaric arts, which all have the same object.

A tyrant should also endeavor to know what each of his subjects says or does, and should employ spies, like the ‘female detectives’ at Syracuse, and the eavesdroppers whom Hiero was in the habit of sending to any place of resort or meeting; for the fear of informers prevents people from speaking their minds, and if they do, they are more easily found out.

Another art of the tyrant is to sow quarrels among the citizens; friends should be embroiled with friends, the people with the notables, and the rich with one another. Also, he should impoverish his subjects; he thus provides against the maintenance of a guard by the citizen and the people, having to keep hard at work, are prevented from conspiring. The Pyramids of Egypt afford an example of this policy; also the offerings of the family of Cypselus, and the building of the temple of Olympian Zeus by the Peisistratidae, and the great Polycratean monuments at Samos; all these works were alike intended to occupy the people and keep them poor.

Another practice of tyrants is to multiply taxes, after the manner of Dionysius at Syracuse, who contrived that within five years his subjects should bring into the treasury their whole property. The tyrant is also fond of making war in order that his subjects may have something to do and be always in want of a leader. And whereas the power of a king is preserved by his friends, the characteristic of a tyrant is to distrust his friends, because he knows that all men want to overthrow him, and they above all have the power.

Again, the evil practices of the last and worst form of democracy are all found in tyrannies. Such are the power given to women in their families in the hope that they will inform against their husbands, and the license which is allowed to slaves in order that they may betray their masters; for slaves and women do not conspire against tyrants; and they are of course friendly to tyrannies and also to democracies since under them they have a good time. For the people too would fain be a monarch, and therefore by them, as well as by the tyrant, the flatterer is held in honor; in democracies, he is the demagogue; and the tyrant also has those who associate with him in a humble spirit, which is a work of flattery.

Hence tyrants are always fond of bad men, because they love to be flattered, but no man who has the spirit of a freeman in him will lower himself by flattery; good men love others, or at any rate do not flatter them. Moreover, the bad are useful for bad purposes; ‘nail knocks out nail,’ as the proverb says. It is characteristic of a tyrant to dislike every one who has dignity or independence; he wants to be alone in his glory, but anyone who claims a like dignity or asserts his independence encroaches upon his prerogative, and is hated by him as an enemy to his power. Another mark of a tyrant is that he likes foreigners better than citizens, and lives with them and invites them to his table; for the one are enemies, but the Others enter into no rivalry with him.

— from Politics by Aristotle