Q:  If we can’t trust the Church to tell us who the Pope is, doesn’t that mean the Church has defected?

A: Well, apparently not, because Antipope Anacletus II was backed by a majority of Cardinals and the entirety of Rome with the exception of the Corsi family and illegitimately ruled EIGHT YEARS until his death.

Here’s the short version.  You can read the long versions at NewAdvent.org and Wikipedia.

Pope Honorious II dies, and in rules established by a predecessor (Nicholas II) and Honorious II, the election of Honorious II’s successor is left to a special commission of eight Cardinals.  They validly and canonically, albeit hurriedly and insistently, elect Pope Innocent II Papareschi the next day.

Later that same day, other Cardinals, backed by all the Roman noble families declare Pope Innocent II’s election invalid, except it WAS valid, as we will see, and instead elect their very corrupt boy, Cardinal Pietro Pierleone and name him Anacletus II.

Antipope Anacletus II Pierleone, having the backing of most of the Cardinals, all of the Roman noble families except one (the Corsi), and all of the Roman populace, drives the true Pope Innocent II out of Rome and he flees to France where he resides for three years, whereupon he is escorted back to Rome by King Lothair of Germany, albeit with an insufficient calvary force of only 2000, and upon Lothair’s departure, Pope Innocent II has to flee Rome again to nearby Pisa, where he remains for four more years.

During these eight years, Antipope Anacletus II enjoys essentially unanimous support in Rome as he plunders the Church’s wealth and spends it lavishly to maintain support and popularity.

When Antipope Anacletus II dies after EIGHT YEARS uncontested and peacefully accepted by the Cardinals and Rome in January of ARSH 1138, an invalid conclave is called (because the True Pope Innocent II is still very much alive), and Antipope Victor IV Conti is “elected”.

This mess was resolved not by arms, but by A SAINT.  Enter Saint Bernard of Clairvaux, who had discerned that despite the essentially unanimous and peaceful recognition of Anacletus II as Pope by the College of Cardinals and the populace of Rome, that this was wrong, and Pope Innocent II was the true Pope, and had been all along.  St. Bernard went to Rome and by only the force of his eloquence in preaching to the people of Rome convinced the Church and the people of Rome of Innocent II’s legitimacy, so that upon Anacletus II’s death and the faux-election of Antipope Victor IV, Victor IV soon PRESENTED HIMSELF AS A PENITENT to St. Bernard, who immediately escorted him to Pope Innocent II, to whom Antipope Victor IV Conti repented and submitted, thus proving that Anacletus II had been an Antipope all along.  Because if Pope Innocent II was the Pope, then that HAD to mean that Anacletus never was. Because LOGIC.

So, the answer is clearly, emphatically YES, the College of Cardinals and Rome HAS ABSOLUTELY, POSITIVELY dropped the ball on who the Pope is, and for EIGHT YEARS, and clearly this did not constitute defection. The Church fully admits that Anacletus II, who reigned peacefully accepted by the College of Cardinals and Church of Rome, was an Antipope, and that Bernard who discerned this, was not only a Saint, but a Doctor of the Church.

So, we have YET ANOTHER powerful Saint to enjoin in our prayers for resolving today’s mess.

Saint Bernard of Clairvaux, PRAY FOR US! 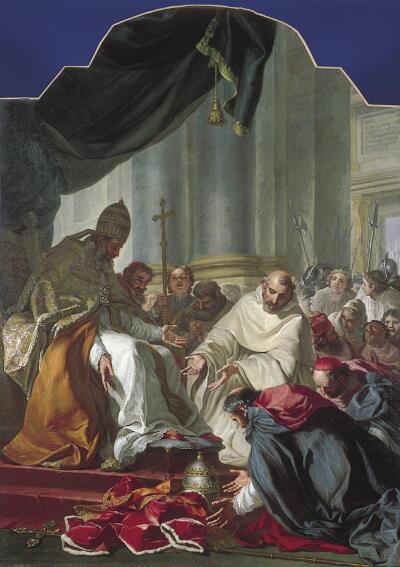