ARSH 2021 UPDATE: It bears mentioning that Antipope Bergoglio, the head of the Freemasonic Covidic Antichurch religion and likely False Prophet Forerunner of the Antichrist, has stated on multiple occasions that doubt is GOOD and ESSENTIAL. Remember this when Trad Inc. apostates begin claiming that their doubt is virtuous and a sign of a healthy mind, and that people who have faith, and do NOT doubt revealed truths about God and His Holy Catholic Church are stupid, crazy, cultists, infantile, psychos, enablers, intellectual cripples, zombies… whatever.

Pro tip: when your rhetoric matches that of Antipope Bergoglio and Freemasonry word-for-word, and is in direct opposition to the infallible magisterium of the One True Faith, you MIGHT want to re-examine your base premises.

“Another sin which is directly opposed to the virtue of Faith is all willful doubt of any revealed truth. For if it is forbidden to disbelieve a doctrine, it is no less forbidden to doubt of it, since faith requires that we should firmly hold fast, without a moment’s hesitation, what God teaches and the Church proposes. But notice, my dear children, that it is one thing for a doubt to enter into our minds, and another for us to give way to it. What is forbidden by this commandment is a willful doubt; that is, a doubt which comes into our mind and which we do not put away when we notice it, but which we dwell upon on purpose. If we dislike these doubts, and do our best not to think of them, we do not commit any sin, but, on the contrary, gain great merit. We are forbidden, however, to do anything which might bring these doubts into our mind, for example, to read Protestant or irreligious books, to go to Protestant schools, or to frequent the company of those who talk against or mock at our religion, for our faith is a precious gift of God, which we are bound, by every means in our power, to guard and cherish.”

—Catechism Made Easy: Being A Familiar Explanation of the Catechism of Christian Doctrine. Vol. I. (Nihil Obstat and Imprimatur, 1881).

But if any of you want wisdom, let him ask of God, who giveth to all men abundantly, and upbraideth not; and it shall be given him. But let him ask in faith, nothing wavering. For he that wavereth (doubts) is like a wave of the sea, which is moved and carried about by the wind. Therefore let not that man think that he shall receive any thing of the Lord. A double minded man is inconstant in all his ways.
-James 1: 5-8

Respect for the souls of others: scandal

2284 Scandal is an attitude or behavior which leads another to do evil. The person who gives scandal becomes his neighbor’s tempter. He damages virtue and integrity; he may even draw his brother into spiritual death. Scandal is a grave offense if by deed or omission another is deliberately led into a grave offense.

2285 Scandal takes on a particular gravity by reason of the authority of those who cause it or the weakness of those who are scandalized. It prompted our Lord to utter this curse: “Whoever causes one of these little ones who believe in me to sin, it would be better for him to have a great millstone fastened round his neck and to be drowned in the depth of the sea.”85 Scandal is grave when given by those who by nature or office are obliged to teach and educate others. Jesus reproaches the scribes and Pharisees on this account: he likens them to wolves in sheep’s clothing.86

2286 Scandal can be provoked by laws or institutions, by fashion or opinion.

Catechism of the Catholic Church 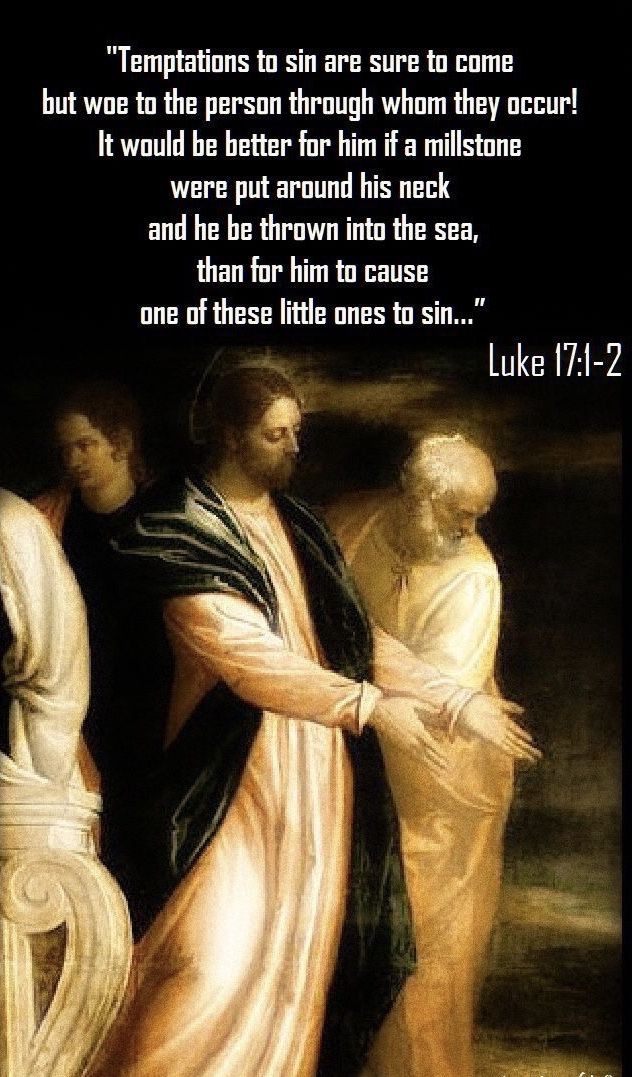