Just putting this out there to make people wake up to the psychopathic malignancy of BigPharma.

Ivermectin is an anti-parasitic AND anti-viral drug that is safer and more benign than aspirin. It is also dirt cheap, especially since it is off-patent and has been for years.

So stop and think about this. We now know from the CoronaScam that Ivermectin has what honest doctors describe as “miraculous” effects against Coronaviridae (aka “colds”) and all respiratory viruses in general, including influenza, both as a treatment for the symptomatic, and as an incredibly effective prophylactic, knocking down viral loads by a factor of 5000 according to ACTUAL SCIENCE performed over the past year.

Here’s what is absolutely infuriating. These SOB’s have had a drug that could have prevented or massively knocked-down pretty much EVERY sickness experienced by healthy adults in the first world – colds and flus – and they intentionally kept this drug off the market in order to feed their multi-multi-multi billion dollar over the counter cold and flu remedy AND flu “vaccine” markets.

How many man-hours lost? How much human suffering (albeit mild, as colds and flus generally are) happily permitted, when the fact is that Ivermectin should be sold exactly like aspirin – in bulk pill form. You should be able to go to any store and buy Ivermectin pills off the shelf by the hundreds. You know, like they already do in Africa and have for decades.

Never mind asking why Ivermectin isn’t part of a prophylactic regimen in all nursing homes and hospitals – we all know the answer to that, right Gov. Cuomo?

No, just think about every incidence of viral crud you’ve had over the years that Ivermectin could have knocked out in a matter of hours, but BigPharma wanted you to get sick and stay sick for as long as possible so you’d buy their high-margin concoctions and placebos.

Welp. The cat’s out of the bag now. These psychopaths have now revealed themselves as conscious collaborators in the largest crime against humanity ever perpetrated – and that was BEFORE the DeathJab. We’re talking CAPITAL CRIMES, folks. In this life, or the next, they WILL PAY.

Meanwhile, I have given away over 400 doses of Ivermectin and am sitting on 900 or so more as I write this.

Folks, don’t sit around and be an effeminate, whiny victim. Man up. When shit gets real, ACT. Do something. Lead by ACTION and by example. Find creative solutions to unprecedented problems and then EXECUTE those solutions. This is called VIRILITY, and it is a virtue.  Therefore, as a virtue, both men and women are called to acquire and develop it.

Remember, you want the 1% INJECTABLE Ivermectin solution for livestock, which you DRINK ORALLY, “per os” as doctors say, at a rough dosage of 1.25-1.75 mL for an adult. Feel free to add a bit more per body weight. Remember, every bottle of aspirin considers a 12 year old girl and a 250 pound man to be in the same dosage cohort, so don’t agonize over milliliters. Just use common sense. Get in the ballpark. Adjust up or down according to common sense. And yes, you absolutely can give Ivermectin to children. It keeps millions of youngsters and tinies in Africa free of flies and worms and has for decades.

For prophylaxis take one dose every so often. I’m doing quarterly, but that frequency could certainly be increased with zero risk. Ivermectin is one of the safest drugs in the world. You would have to be a royal idiot to overdose on it. Aspirin and Tylenol are far, far more toxic (especially to the stomach and liver, respectively) and dangerous.

Also, the horse paste version is fine too. It comes with a dispenser calibrated to body weight. NonVeniMark says the green apple is his favorite flavor.

But, as always, I have to re-state that the “pour-on” form Ivermectin is topical fly repellent that is essentially Ivermectin dissolved in diesel fuel to be poured onto (hence the clever labeling) and stick to the hair coat of cattle and sheep. If you are dumb enough to buy the pour-on formula and drink it, after my repeated explicit instructions to buy either the 1% INJECTABLE solution and take it orally, or the edible horse paste form, then I really can’t help you. (My sternness here is a direct result of my inbox. Reading comprehension is basically gone in the mainstream culture.)

These can be bought in any farm supply store. Yes, they have started putting up big scary bullshit agitprop signs telling people that the 1% Injectable and paste forms are not for human consumption trying to imply toxicity. Of course they are going to say that. The putsch regime wants as much sickness and death as possible, and BigPharma wants to sell their obscenely marked-up and ineffective drugs AND, of course, their DeathJabs.

Even more evil is the fact that BigPharma and the government know damn good and well that the “Emergency Use Authorization” for their poison DeathJabs are wholly contingent upon there being NO OTHER DRUGS to treat the Masonic Sniffles. Ivermectin proves that the DeathJab is a criminal and malicious conspiracy, because even if the DeathJab actually were a vaccine (which it is not), bypassing ALL testing is completely unjustified because there is a HIGHLY effective treatment, so effective that it is routinely described as “miraculous” by doctors who have used it.

The “vaccines” are clearly, obviously about something completely unrelated to curing a seasonal cold virus, namely totalitarian control of human life, AND almost certainly the rapid reduction of the human population by as much as 90% as every one of the oligarchs have been openly declaring a “necessity” for decades. If it had ANYTHING to do with health, Ivermectin would be deployed. Instead, all there is is terrorizing agitprop and coercion which violates every human rights charter in existence vis-a-vis coerced medical experimentation. There is only the “vaccine”. All must have the “vaccine”. There is no alternative to the “vaccine”. Only people with intellects completely darkened by living in unrepentant mortal sin could fall for such transparent lies and obvious criminality.

I haven’t been sick a day since January ARSH 2020 (the day Kobe Bryant died, in fact, and I suspect I did in fact have the Masonic Sniffles, as I had been in a situation where there were a bunch of Asian tourists). I am VERY curious to see if I get any seasonal viruses now that I’m taking Ivermectin as a quarterly prophylactic. And if I should feel something coming on, I’ll definitely take a couple of quick-hitter doses of Ivermectin just in case it is a virus, and hopefully knock it out quick. If it isn’t a virus, but bacterial (staph, strep, etc.) then Ol’ Mr. Immune System will just have to git ‘er dun. 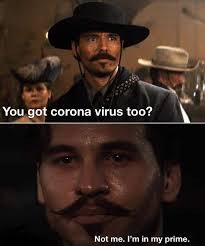