The North American College in Rome has a notorious gay scene, and heterosexual men there are in the minority numerically, and CERTAINLY power-wise.  Not only are roughly half of the students sodomites, the NAC is run and controlled by sodomite priests, and the social scene surrounding the North American College is a magnet for gay laymen and fag hags in Rome.  Gay male tour guides in Rome (led by their mafiosa chalice-snatching queen, the odious fraud Liz Lev) hang around the NAC and covet any invitation they get to the NAC to cruise the student body.  Some NACcers even end up getting “liturgy tutoring” from sodomite layman liturgy experts in Rome, which is, of course, a euphemism for sodomitical hook ups, not uncommonly inside of churches, or even St. Peter’s Basilica itself.  These wretched people think the Anglo Gay culture in Rome is some sort of an “elite” caste.  And, like most narcissists, they lack the self-awareness to realize that they are gutter trash who are politely tolerated (barely) by their societal betters, which includes trash collectors, taxi drivers and the people who stand in front of restaurants barking in customers.

But that isn’t the worst of it.

Ted McCarrick and Donald Wuerl, among others, were just some of the American Cardinals and Bishops who used the NAC as a cruising spot, with PLENTY OF AMBITIOUS SODOMITE SEMINARIANS AND PRIESTS in residence at the NAC who were VERY willing to engage in sodomy with with elderly bishops and Cardinals in order to secure plum posts and get on the career fast-track to elevation to the episcopacy.

This is just ONE reason that EVERYONE knew about McCarrick and the whole “Come sit on Uncle Teddy’s lap” crap.  EVERYONE in Rome knows what goes on at the NAC.  Anyone who feigns shock and ignorance is lying through their teeth.  EVERYONE understands that sodomites control the institutional US Church, and that they recruit, ordain and promote THEIR OWN.  Blackmailability is a FEATURE, not a bug, and in fact, blackmailability is a REQUIREMENT – after all, how can they “trust” you with any future position of power if you aren’t guilty of exactly the same capital crimes against nature and sacrilege that they are?  Why do you think Donald Wuerl felt so comfortable acting like a queeny bitch to everyone every time he stayed at the NAC?  Why did Donald Wuerl feel free to demand chocolates on his pillow and valet turn-down service in his guest suite at the NAC, and demand that his morning newspaper be ironed and folded in EXACTLY the right way or else throw an hysterical fag fit?  Why was Donald Wuerl so confident and at ease acting like the world’s biggest fag while at the NAC?

The question answers itself.

Journalists?  Anyone want to look into the “casting couch” culture at the North American College? Because Anthony Gorgia is just one of many, many, many men who have been harassed and scandalized by the gay cabal at the NAC.  Anyone? Bueller? Bueller?

And please keep Mr. Anthony Gorgia and his legal team in your prayers.  They are going up against a billion-dollar mafia that is murderously ruthless and devoid of any semblance of conscience or shame. Gorgia is suing the unctuous predator Cardinal Timothy Dolan and the NAC, including several faggot priests that run the NAC by name, for CLEARLY discriminating against him for being heterosexual and not “an ally” of the sodomite cabal. 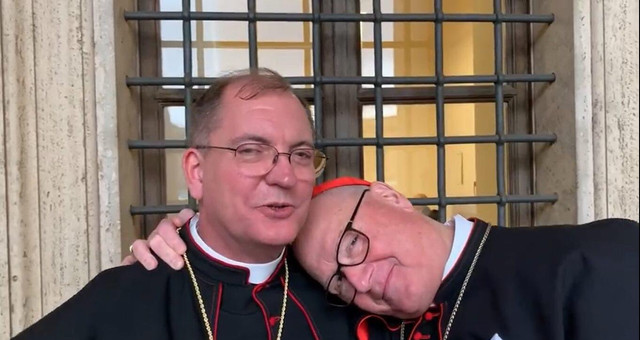 That fat boy’s so gay he could change a $12 bill for three $4’s or two $6’s. He is also a successor to the Apostles, and deserves to be laicized and spend the rest of his life in prison – AT MINIMUM.