Okay. Reposting again as carrier groups are in combat staging off both seaboards, and as of this writing 18 (and maybe more) states are onboard the Texas SCOTUS filing. There is now a longitudinal quasi Mason-Dixon forming from North Dakota to Texas. If Idaho joins, that line will extend to the Pacific states. China is openly boasting of having control of the USGOV from the highest levels (Biden). Oh, and don’t forget that little detail of the US being under de facto martial law, curfews, and movement restrictions, with the strongest enforcement being on the Pacific Coast port cities. Major highways and thoroughfares are ALREADY CLEARED and civilians put out of the way for infantry and artillery movements – both by an invasion force moving inland, and domestic forces of ambiguous loyalties. CONUS is staged for hot war. 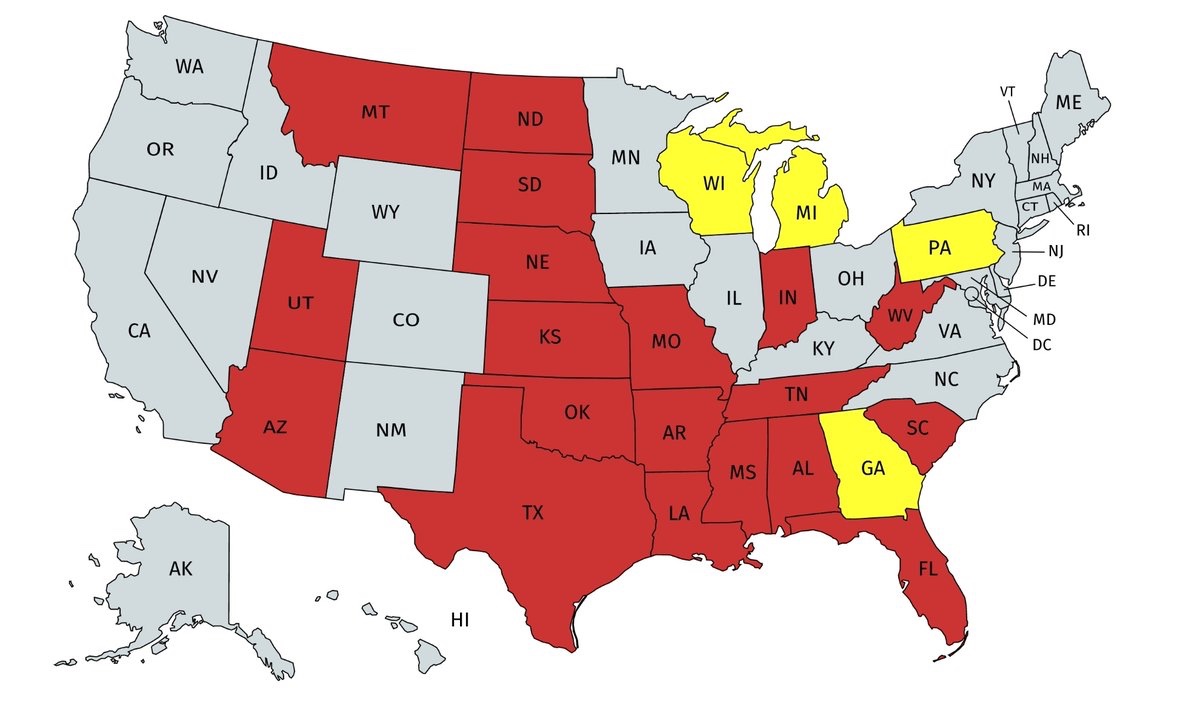 (I originally wrote and posted this on June 23, ARSH 2010, almost a full year before I went viral. Wow. It’s almost as if you could see this all coming, or something. Actually, I have seen this coming since the late summer of ARSH 2008 when I realized that the United States was about to elect and install a Communist plant who wasn’t even an American citizen. Things like that tend to end . . . badly.)

I have received many emails and have heard much talk about the U.S. breaking into two countries ‐ one Constitutional Republic built on a foundation of Christian principles consisting of the Mountain, Central and Southern states (essentially a Second American Republic), and a Marxist‐Socialist‐Atheist confederation consisting of the Pacific Coast states, the Upper Midwest (IL, MI, MN, WI) and the New England states.

While it is sorely tempting to think about drop‐kicking the liberal states and going our separate ways, the reality is that this would be a MASSIVE mistake, and would almost certainly set in motion a chain of events that would end Western Civilization.

If this sort of “divorce” were to happen, we all know that the Second American Republic (SAR) would thrive while the Marxist Confederation (MC) would quickly fail catastrophically. When that failure happened, the MC would come begging to the SAR to bail it out. Now, you might be thinking, “Screw ‘em. They made their bed, now they can sleep in it. They’ll get no help from us.” That’s a knee‐jerk reaction, and it would be the WRONG reaction. Why? Because if the SAR turned down the MC’s requests for help, who would be the ONLY other nation capable of bailing out the MC? China. And as we should all understand with crystal clarity, the liberals in the MC states would be, without question, idiotic enough to actually INVITE the Chinese to take over their economy, and eventually their land ‐ purely as a “peacekeeping force” to control the food shortage riots, you understand. So, in order to stave off Chinese involvement in North America, we would have to bail the MC out anyway. It’s a textbook “damned if you do, damned if you don’t.”

In the event of a divorce wherein the SAR didn’t prop up the MC, the ports of San Diego, Los Angeles, San Francisco, Portland and Seattle would be completely vulnerable, and eventually would be thrown wide open to a cold invasion by the Chinese – almost certainly by invitation. The same could also be said for the East Coast ports. Boston, New York and Washington D.C. would be vulnerable and/or invite a “peacekeeping force” from the U.N., probably led by Russia.

Now we need to talk military tactics. Assume that what I have just laid out actually came to pass. The SAR and Constitutionalist refugees from the MC states are now compressed into the geographic center of the continent. To the west lies the Chinese Army. To the east lies the UN/Russian army.

This is called a “Strategic Flanking”. In fact, this would be the largest strategic flanking in world history. To be “flanked” is very, very bad. If you are fighting any sort of battle, you want to keep your adversary in front of you at all times and your sides CLEAR. You must NEVER allow the adversary to move along your sides (flanks). Combat tacticians are CONSTANTLY looking for a way to move their troops in such a way so that they “gain the flanks”. Once a force loses its flanks, it becomes nearly impossible (without a massive advantage in weaponry) to escape. The most famous tactical flanking in history was executed by Hannibal at the Battle of Cannae in 216 BC. With fewer than 40,000 men, Hannibal drew the Roman army of 90,000 men into his center, and then wrapped around their flanks on both sides, thus forming a semi‐circle around the Romans. By doing this, Hannibal was able to COMPLETELY DESTROY the Roman army with fewer than HALF the number of men.

The most famous strategic flanking to date is probably the flanking of Nazi Germany by the Soviet army to the east and the Allies to the west. While this involved the entire European continent, the flanking I describe above on the North American continent would dwarf the Nazi flanking in size and scope. It is not hard to imagine a massive Chinese force pushing and compressing the SAR from the west, eventually wrapping around the northern flank, with a UN/Russian force compressing from New England in a southwesterly direction, pushing the people of the SAR south towards the Gulf of Mexico – which is at this moment being taken out of strategic play by the Russians via the cold lodgements of Cuba and Venezuela – and utter defeat.

Given these obvious tactical realities, I hope that one and all now see that the TERRITORIAL BOUNDARIES OF THE FIRST AMERICAN REPUBLIC MUST BE PRESERVED. Integrated sovereignty MUST remain intact from “sea to shining sea”. Amicable divorce is NOT an option. We can not allow Marxism to establish any quarter, even in the spirit of “compromise” and the avoidance of possible hostilities, because that “compromise” and “avoidance” would be to sign our own death warrants, and the death warrant of Western Civilization. It would be far better to fight a civil war of territorial preservation than to fight a war against a conquering Sino‐Russian invasion.

How sick is it that I have to post this crap? I’m a 33 year old single woman (when this was written). I should be planning my next business move, or thinking about recreational travel. Instead, I’m standing here, mid‐morning on a Wednesday, writing essays on secession dynamics and military tactics for the North American theater. This is the living, breathing definition of FUBAR. God save us.

Because this clip can never, ever be posted too much, here is Larry Grathwohl, the man who infiltrated the Weather Underground, outlining Bill Ayers’ and Bernadine Dohrn’s plan for balkanizing the former U.S. territory after overthowing and collapsing the Republic, and delegating administration of the quadrants of the landmass to Russia, China, Cuba and Vietnam. Since Cuba and Vietnam are mere satellites, the dynamic today is clearly that of a Sino-Russian axis.

Bill Ayers, you will remember, wrote Obama’s fictional “autobiography” Dreams From My Father, and Ayers’ family supported and groomed Obama for the Presidency from the time he was a teenager. It appears that Chicago Communist Frank Marshall Davis handed Obama off to the Ayers group in Chicago in the early 1980s. Bernadine Dohrn’s fingerprints are also all over Obama’s course syllabus when he was an adjunct lecturer at the University of Chicago. And of course, Obama’s entire adult life and political career has had Ayers and Dohrn as the main enablers and drivers.

Oh, and just as an aside, Grathwohl’s eyewitness testimony confirms that Ayers and Dohrn have planned on and anticipated the need to murder fully 10%-15% of the population as “unreformable, die-hard capitalists.” In the early 1980s when this interview was recorded, the population of the U.S. was 250 million, thus Grathwohl’s number of 25 million that Ayers and Dohrn were planning on killing. Today, that number would be 30-45 million Americans that will need to be “eliminated” in order to quash the “counter-revolution.”