They are LITERALLY trying to sicken and kill people with the masks.

They are trying to incite strep and staph. You get sick, scared shitless you present at the ER, they cut you off from your family and support structure, withhold treatment, intubate you, blow your lungs out, murder you, declare it “Covid”, collect the FedGov payout, watch their stock value in the “test” and “vaccine” corporations skyrocket, and advance the tyranny.

Fauci literally co-authored a peer reviewed paper on the danger of staph and strep, and has basically engineered this whole thing to sidestep the advent of antibiotics and “Make Colds and Flus Lethal Again”. The masks are intended to CAUSE staph and strep respiratory infections.

Largest crime against humanity EVER perpetrated.

Download and screen cap this paper before they scrub it.

Published pathologic and/or bacteriologic findings from the 1918–1919 influenza pandemic. Although the cause of influenza was disputed in 1918, there was almost universal agreement among experts [e.g., 20, 27–33] that deaths were virtually never caused by the unidentified etiologic agent itself, but resulted directly from severe secondary pneumonia caused by well-known bacterial “pneumopathogens”; that colonized the upper respiratory tract (predominantly pneumococci, streptococci, and staphylococci). Without this secondary bacterial pneumonia, experts generally believed that most patients would have recovered

What this means is that in 1918 “the flu” was a ghost: “unidentified etiologic agent”. Yes, there was a virus, but it wasn’t what killed people. It was the upper respiratory tract (that is the throat and bronchial tubes, folks) strep and staph bacterial infection that turned into pneumonia. And in case you don’t remember your junior high life science class, every doorknob and surface on the planet has strep and staph on it. It is ubiquitous. Swab a doorknob and culture it on a petri dish and the he resulting forest of staph and strep will make 13 year old boys diligent hand washers.

Wearing a mask is like licking doorknobs all day.

That’s why they are forcing it. 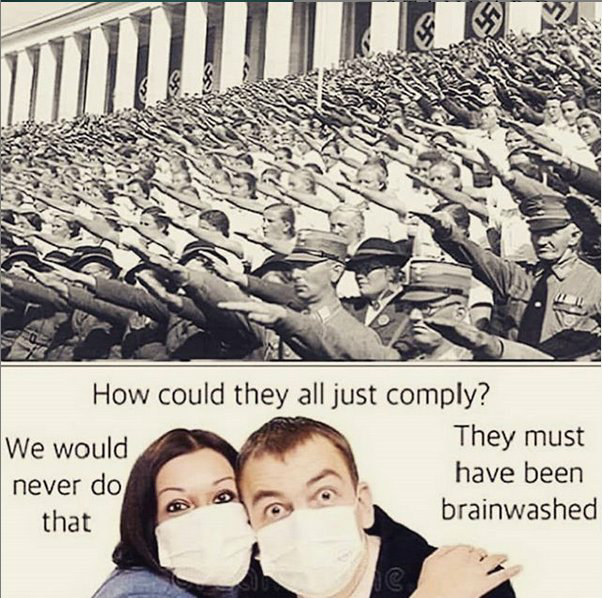