Fascinating paper authored by an east coast M.D., terrified for their career, detailing the total mendacity of the mask agitprop.

Click HERE to read and distribute. The author encourages FULL reposting so long as nothing is edited.

Read up in the last section of this short paper on Flock Worker’s Lung. It’s what you get from constantly breathing in particulate polypropylene fiber – the fine fuzzy coating on all masks.

We all know the mask stuff is a total lie and has exactly ZERO to do with public health, and is a purely RELIGIOUS dynamic.

Yes, that’s right. The mask is a purely RELIGIOUS item. CoronaScam, exactly like islam, is a totalitarian political system masquerading as a religion. This is why people, especially young people, have embraced it with such zeal, and why young people are such enthusiastic mask wearers.

CoronaScam is the working fusion of Freemasonry and islam.

These people have CONVERTED to the CoronaScam One World Masonic Religion. They are essentially the same as jailhouse converts to islam. The mask is their sign of membership in this political religion, and it is your sign of submission to their religion, which they believe to be superior to all others.

The mass apostasy of the west has left a sucking void for religion, which every human heart is built to long for – we long to find God. And God has revealed Himself to us through His One, Holy, Catholic and Apostolic Church.

Young people, many having never had ANY religion at all, and being nearly unanimous in their conscious rejection of the Catholic Faith, are now for the first time in their lives being “religious”. CoronaScam IS THEIR RELIGION.

The fact that the west has apostatized from the ONE TRUE FAITH means that most people, and especially young people, are susceptible to any false religion precisely because the ONE TRUE FAITH is openly regarded as the one faith that is totally false. All false religions are “on the table” as being “a form of truth” EXCEPT the Holy Catholic Faith, which alone is considered completely false. This is no surprise. Total inversion has been prophesied for millennia, including by Our Lord Himself in the Gospels.

Now CoronaScam comes along, with its intense narcissism, anti-morality especially in the form of sexual libertinism, and totalitarian power play, coupled with anti-rites and anti-sacramentals, the submission mask being first among them, and the people desperate to fill the religious void in their souls, having apostatized and sworn hatred of the One True Faith, are easy and zealous converts.

The CoronaScam submission mask is the most obvious and open manifestation of Luciferianism ever seen in human history, I think it is safe to say. If a person can’t see it for what it so obviously is… well. It raises questions.

So let’s finish with a quick list of maladies which the filthy submission masks are causing so far:

Staphylococcus infections of the mouth, throat and lungs

Streptococcus infections of the mouth, throat and lungs 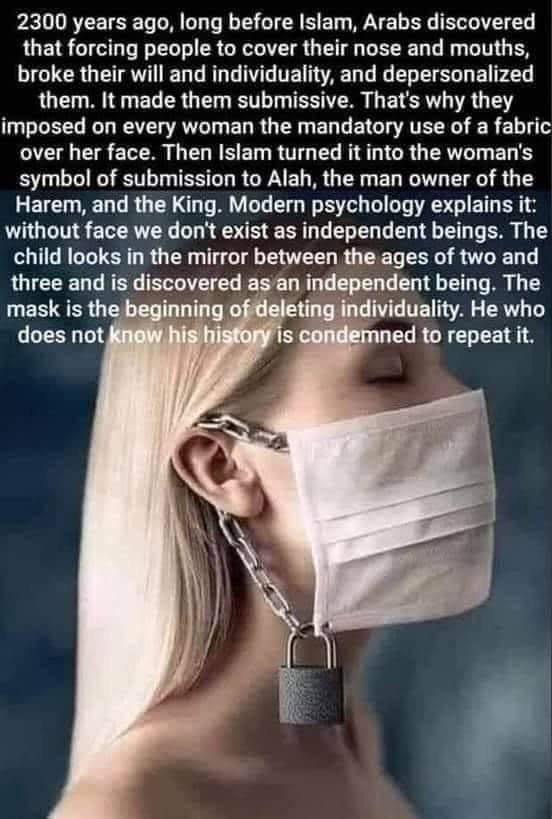