(An oldie but a goodie from eight years ago… Particularly germane if you are being pressured to continue to patronize clearly overtly satanic businesses like Netflix, etc. ….)

I recently attended a conference about Catholic ethics, and toward the end discussion opened up a bit. An upper-middle class suburban woman (an uber Neo-con Kathy) raised her hand and complained that her 13 year old daughter persistently wanted to dress like Kim Kardashian, I believe the word ”whore” was used, as the daughter has been regularly watching the Kardashian filth on TV and wants to be just like Kim Kardashian, who is, for those of you who do not know, a sociopathic moral degenerate and de facto prostitute and porn star, who is also teetering on the precipice of being mentally retarded.

I tend to keep fairly quiet in venues such as this. If I am not ”the speaker” then it is my job to listen, but since discussion had opened up, I did lean forward and asked this woman why she allowed cable TV into her home in the first place, and why she allowed her daughter to watch evil filth. Some response was made to the effect, ”Well, I can’t control . . . “ at which point I cut her off and told her that she could call and cancel the cable feed this afternoon, at which she bristled and snarled back at me, ”I’m not going to have this discussion. I’M NOT GOING TO LIVE IN A BUBBLE.”

Understand, this woman had no clue who I was, so the bristling and snarling was not because she was intimidated by me – it was an organic response to the thought of taking away her precious Marxist-Sodomite agitporn delivery vector – her precious teevee. She then got up and left.

Had I gone blowtorch on this woman, here is what I would have said:

Madam, you just raised your hand and volunteered that your 13 year old daughter is emulating as a role model and dressing like a well-known and utterly shameless whore in an effort to elicit sympathy from this group. When I asked you why you simply don’t do the absolute minimum of what any parent should do, namely removing the evil of TV from your home and thus protecting your daughter, you snapped back that you refuse to “live in a bubble.”

Madam, from what little you have told us, it sounds like your daughter, being 13 years old, upper-middle class, living in the United States in 2012, and already EMULATING WHOREDOM, is well on her way to being lost to hell for all eternity. Her soul and psyche are being formed in profound ways, especially now as she is in the throes of puberty, setting up who she will be and the choices she will make for the rest of her life. And you, her mother, refuse to do what is clearly the BARE MINIMUM to stop your own daughter’s descent into the grips of hell, namely eliminating cable TV from your home, because you don’t want to “live in a bubble?”  You would watch your own child be lost to hell before you would go without TELEVISION? Do you realize that in this you are also putting YOUR OWN SOUL at profound risk for eternal damnation?

I don’t know your daughter, and probably never will. I don’t know you, and to be frank, I don’t like you and we will almost certainly never be friends on this earth. BUT, for some reason which I cannot explain, I CARE whether or not you and your daughter go to heaven or go to hell. I am not indifferent to your fate, and am intensely desirous of both of you making it to heaven. In fact, it appears that I care more about the eternal fate of your daughter’s soul than you do. This is charity: not being indifferent to our fellow human beings. (The fruit of the Second Joyful Mystery – the Visitation: love of neighbor) I do not like you, nor am I obliged to, but I am not indifferent to you, which IS my obligation.

Madam, you are the walking personification of the Marxist goal. You are a totally sensuous, self-absorbed person who can only see the world through the prism of your own faux-victimhood, so much so that your self-centered sensuousness even takes precedence over the eternal fates of the souls of your own young children. The last wedge, the wedge between mother and child, has been driven home, and you are the proof of that.

Madam, that “bubble” that you refuse to live in, that “bubble” that simply asks of us that we reject evil, is what the rest of us call “The Sacred Heart of Jesus”, pierced and burning with love for you, your daughter and everyone else. But, if you don’t want to live in that ”Bubble”, then I can promise you Sister, YOU WON’T. EVER. If you find the “Bubble” too boring, too isolating, too embarrassing and too socially awkward; if you hold that “Bubble”, all who dwell in It, all those who seek to dwell in It, and those who are truly desirous of you and your daughter dwelling in It, in scathing contempt, then Madam, I can promise you that you will never, ever have to experience It. 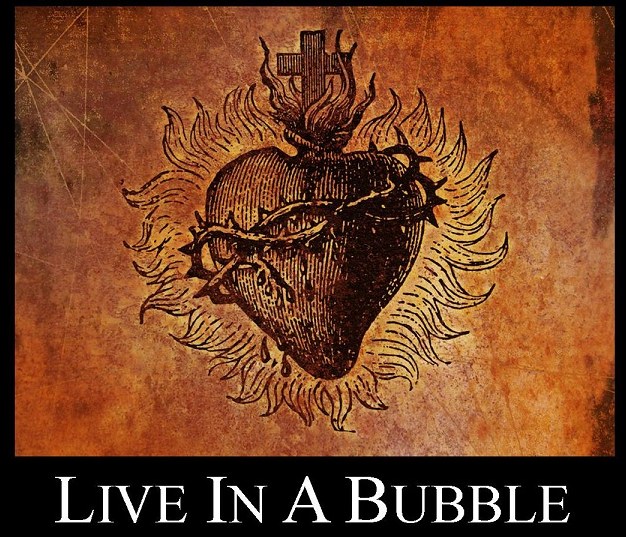