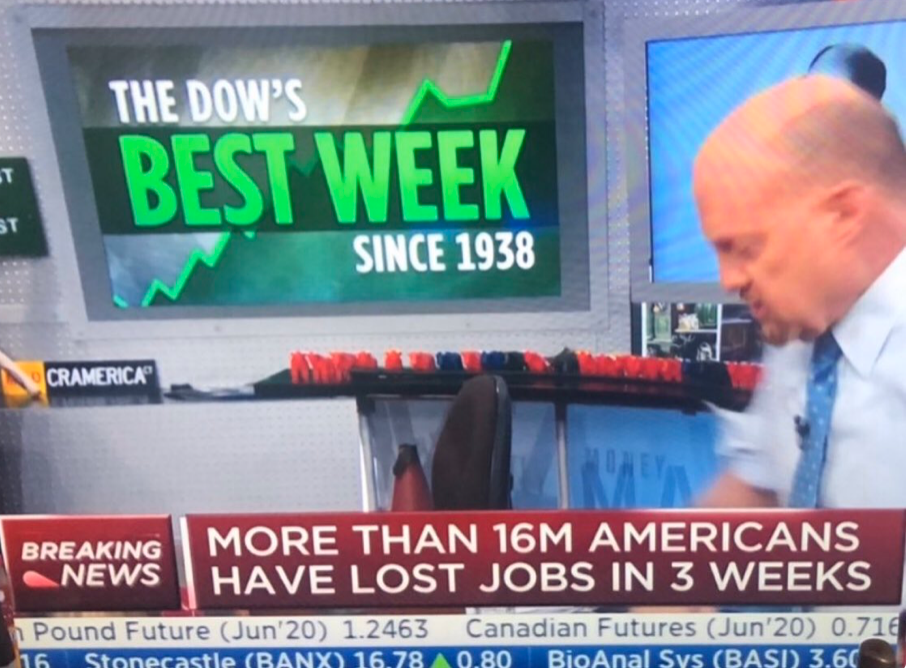 Because the whole thing is completely, totally fake.  It is a giant Ponzi scheme.  The FedGov is pumping $125 BILLION PER DAY to keep the Dow bubble inflated.  The entire economy is being nationalized before your very eyes.  If this doesn’t make you understand that, nothing will.

I think they are planning on “controlling” inflation by using the Bill Gates Faux-Vaccine Mark of the Beast paradigm to completely control velocity; making it impossible for people to turn over dollars.  Cash will be eliminated and criminalized, and all banking and ability to buy and sell will be tied to Gates’ Mark of the Beast.  In this way, they will be able to set a limit on how much you can spend per day, and on what.  So, let’s say the limit is $100 per person per day.  They are betting that they will be able to control the MV = PQ equation by exerting totalitarian control over the V(elocity).

If you would like to read more about this, please read my essay from February of ARSH 2016, “The Mark of The Beast Explained: MV = PQ, With Totalitarian Control of V(elocity).”

Permit me to excerpt just the conclusion.  As you sit imprisoned in your own home, along with fully half of the human race, remember that this was written over four years ago:

Do you realize what VELOCITY is?

VELOCITY OF MONEY is nothing less than a manifestation man’s God-given FREE WILL. Velocity is a manifestation of man’s freedom to choose what he does with the fruits of his labor and creativity – his very existence through time. Does he spend? Does he save? Does he invest? Does he tithe or give alms? Velocity speaks to the dignity of man in the sense that God created man with free will, and thus able to love – and even though we are talking about Monetary Theory, when you drill down on these concepts, where you always, always end up is at LOVE. Do you love, or are you a Diabolical Narcissist (like the Bankster Oligarch Class and their Bureaucrat Toadies)? Do you love God? Do you love your neighbor as yourself because God loved us all first? Love is completely contingent upon free will. This freedom of will and corollary ability to love is one of the primary ways in which man is “created in the image and likeness of God”.

We are now, quietly and effeminately, entering into a supernatural totalitarianism never before seen. The objective is to convince man in his post-modern, post-Christian effeminacy, materialism and narcissism, that he is NOT free to choose, is a slave to the will of the Oligarchy, and thus capitulate to serving the Beast without putting up even the smallest fight. “But I had no choice – they took money out of my account and sent it PlannedParenthood, the Muslim Brotherhood and the ManBoy Love Association automatically. I had NO CHOICE….”

And a main front of this attack, whether anyone acknowledges it or not, is the equation MV = PQ. So maybe we should spend less time watching the Trump-Clinton joint-produced and pre-scripted “reality show”, and a little bit more time being adults and, I dunno, maybe mounting some sort of concrete resistance in the real-life war that is raging all around us.

“So then, brethren, we are not the children of the bondwoman, but of the free: by the freedom wherewith Christ has made us free. Stand fast, and be not held again under the yoke of bondage.”