Reprinted in full. This is terrifying.

We are all still in the throes of suffering the great shock of Father Evan Harkins’ recent and unexpected passing. It is especially true that those of us who knew Father well simply cannot get our heads around this tragedy. It came out of nowhere, and happened to one of the finest, holiest, most gentle and humble priests we know. Everything seemed perfectly normal in Father’s life. He offered Masses at the parish and heard confessions that weekend. We are left scratching our heads; how on earth could this have happened, but especially to someone like Father Harkins? It just doesn’t add up. It simply doesn’t make sense.

Father had been close to our community even since he was a seminarian. Over the past nine and a half years, he has offered Mass for us more times than I can count. He arranged and attended a monthly priest gathering at our retreat house, and he was just on a private retreat here at our monastery last week. After speaking with our chaplain who was with him, and also to his mother, with whom Father was very close, there are certain details that I feel compelled to bring to you in order to try to bring some peace, understanding and closure to this tragic event – for our community, for brother priests and seminarians, for his family, his parishioners past and present, and everyone who knew and loved Father.

After attending an event at Good Counsel in early January, Father felt very ill. He felt so sick to his stomach that he stopped at a hospital, as he didn’t think he could make it back to St. Joseph. He was prescribed a medication to help alleviate the pain and nausea. A couple of weeks after that, he relayed to his mother that he had begun suffering from certain panic and anxieties over things that would never had bothered him before. The Sisters who interacted with him at the retreat house could sense that he just wasn’t himself, as did our chaplain who was able to speak to him at greater length.

While we don’t know for sure what exactly was happening in Father’s mind, I can only relate our own experiences with the same type of drug prescribed to Father — serotonin reuptake inhibitors.

I myself had an experience that I will never forget, and it was absolutely terrifying. I took the pill at night, and could not sleep, finding that I was losing all control of my thoughts and emotions. It was as though my mind and body had been completely hijacked. Needless to say, I stopped taking the drug immediately.

Another Sister was given a prescription for her stomach trouble. The doctor prescribed a drug that was normally used for depression and anxiety, but also used for stomach problems. When I found her the next morning in a fetal position, sobbing and convulsing, I threw away the rest of the bottle.

Yet another Sister fell into deep depression after being prescribed an anti-depressant for the relief of headaches. After she had been taking it a couple of days, she felt so depressed and suicidal, she walked out of the monastery down the road, with the overwhelming yearning to just end her life. It was truly a miracle she came back, through the intercession of St. Benedict, and when I learned what was going inside of her, I immediately dumped those pills too. The suicidal thoughts went away after the pills had run their course.

While not specifically the same drug as what Father had been prescribed, all of the above interfered with neurotransmitters, which are chemical signals to the brain. Though the Sisters had only taken minimal doses, Father had been on the drug for three weeks. While there is no doubt that these drugs certainly can and do help people, it is also very true that the same drugs can make certain people literally lose control of their minds. Also, Father did not grow up taking any kind of medications, which perhaps made him even more sensitive to the negative effects of the drug.

Father Harkins left his retreat early without explanation. I learned afterwards that he just couldn’t handle the panicky feelings and anxiety he was experiencing. He also had had a very bad nightmare while here. While Father may have felt some stress and anxiety before January, I do know, as we all do, that he would not, could not have ended his life on this account. He clearly began to experience feelings he never had before once he started taking this drug. And this awareness likely caused him even more anxiety, not knowing how to cope with such overwhelming feelings, producing a snowball effect. He was not making a connection with the medication, that it could be the source of these attacks. And here we are now, so many broken hearts, striving to cope with the absolute worst outcome of side effects of prescription drugs.

I hope and pray that these words can in some way to help souls understand how something like this could happen to someone like Father Harkins, and ease the tremendous pain of it all. In addition, perhaps it can also act as a warning to be very careful with regard to pharmaceuticals. One person can have such a diametrically opposed reaction to another when taking the same drug.

Please feel free to pass this message on to anyone who knew and loved Father. I believe with all my heart that the good God Who knows all things, will take all these circumstances into account, and grant Divine Mercy to Father and to all of us. We will continue to pray very earnestly with all our hearts, and entrust everything to the Immaculate Heart of Our Mother, knowing she will intercede for Father and for us all.

In her Sorrowful and Immaculate Heart,

Benedictines of Mary, Queen of Apostles 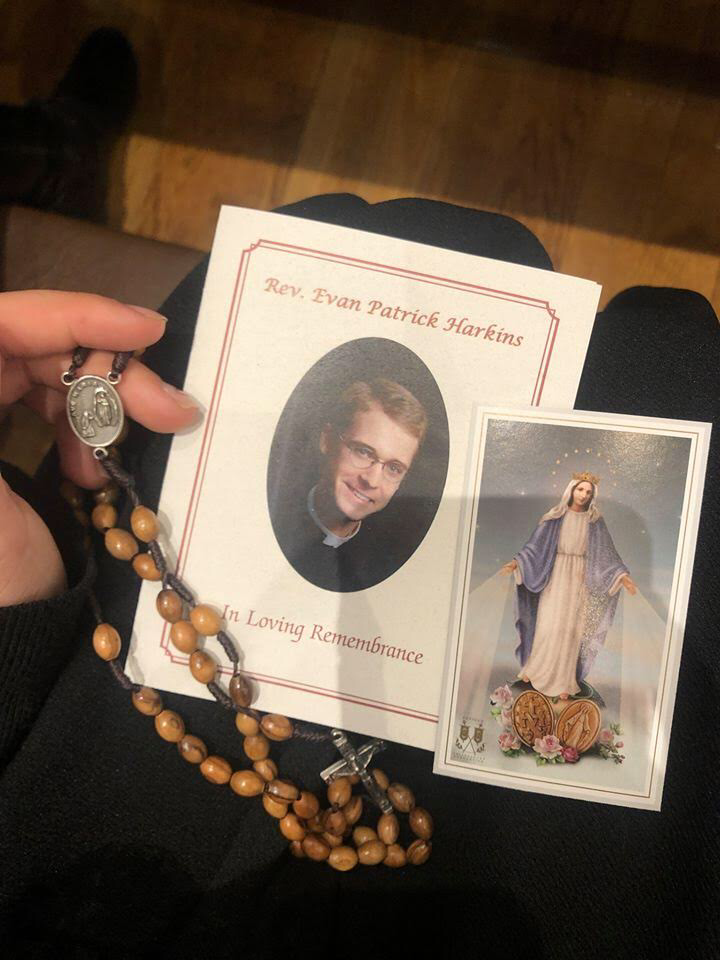