At the request of the Pope (sic), the Pontifical Biblical Commission, the highest technical ecclesial organism in interpretation of the Holy Scriptures, has issued a report on the anthropological vision in the Bible in which the conception of homosexuality is radically revised.

“A new and more adequate understanding of the human person imposes a radical reservation on the exclusive valuation of the heterosexual union in favor of an analogous reception of homosexuality and homosexual unions,” can be read in the study commissioned by His Holiness (sic) to Pontifical Biblical Commission on the anthropological vision of the Bible, which includes extensive attention to the issue of homosexuality, whose expression conceives as “a legitimate and dignified expression of the human being.

So, we now have Antipope Bergoglio literally ratifying sodomy and denouncing the entire Natural and Divine Law as giant mistakes, literally establishing his own “new law” and “new religion.”

So, what can we now expect?

-More condescending essays by Trad Inc. partisans explaining how this is all TOTALLY in-bounds with regards to the Petrine Promise, and how this has all TOTALLY happened before and you’re all just stupid and un-ed-ju-ma-cated….

-More silence as people follow the logical progression that naturally flows from the false base premise that “Francis” is or ever was the Pope and voluntarily fall into:

-Schism (specifically to the Eastern Orthodox), and

-Freemasonry (the Papacy is a meaningless and even harmful institution that must be demythologized and reduced to total irrelevancy and anyone who actually believes in the words of Our Lord in the Holy Gospels about the Papacy is an “ultramontanist” infant).

-More categorical refusal to so much as even ask the question if anything ODD or SUSPICIOUS or CRIMINAL immediately preceded the ascendancy of Bergoglio.

-More proud and intransigent violation of the Law of Non-contradiction, holding that standard of Unity is simultaneously the vector of schism, and that Jesus Christ is a lying, faithless oathbreaker who has put His Church on earth into a damned-if-you-do, damned-if-you-don’t Catch-22, thus denying the Divinity of Christ, and thus denying the totality of Salvation History.

In other words, more circus level contortions to avoid one simple thing:

Re-assessing the base premise that Bergoglio is or ever has been the Roman Pontiff.

It is VISIBLY OBVIOUS that Pope Benedict’s attempted partial resignation was canonically invalid.

It is VISIBLY OBVIOUS that Pope Benedict is the one and only living Pope.

It is VISIBLY OBVIOUS that Bergoglio has absolutely no participation in the Papacy and its attendant graces and supernatural negative protection, and never has. 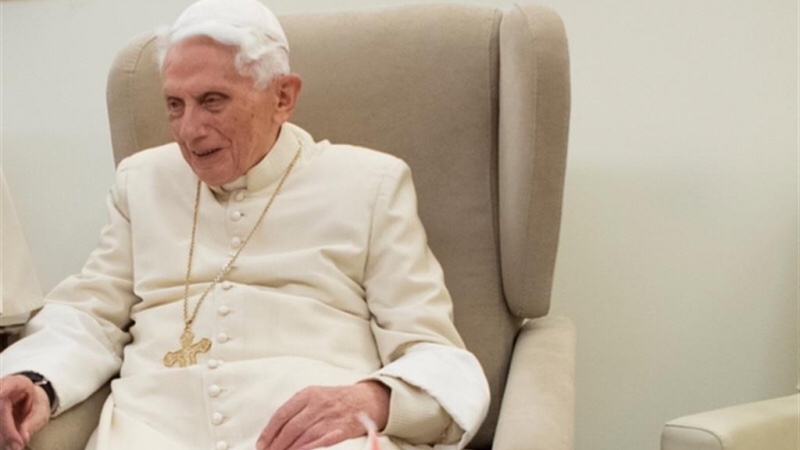 Video just in of Trad Inc. and Neo-Catholic “conservative” partisans preparing their next “Francis is definitely Pope, shut up Stupid!” contortion routines: