Thank you for the link [answering a previous emailed question about the canonical definition of “Substantial Error”]. I must have missed or forgotten that article [reprinted in full below].

I must admit that when I first stumbled on your blog, and read about Benedict’s resignation not being valid, I thought you were crazy. But something told me to stick to reading, and I did. And now, you have made a logical convert of me.

Yes, I have had that sort of push back when I have made statements unrelated to the resignation, and the answer is always the snide “you’re not a [insert name of profession]”. Does one really have to hold a degree in Canon Law to understand what it says? I hope not, because a lot of Canon Lawyers are getting it massively wrong!

What also shook me was seeing your posts of Skojec and Hilary White openly questioning a dogmatic Ecumenical Council on the Dogma of Papal Infallibility. But, as you say, that is the logical progression when you start with a false premise. 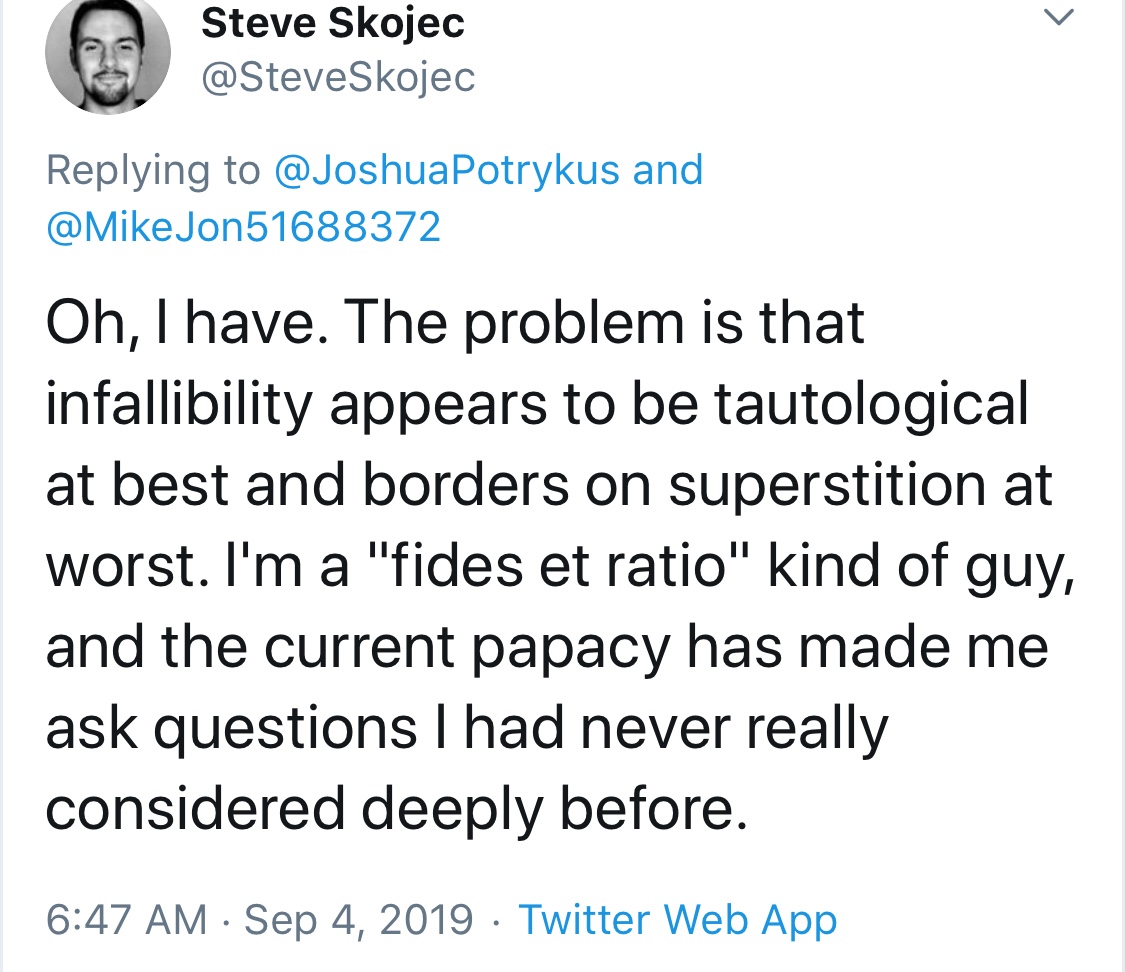 Q: What does Substantial Error mean?

A: Ignorance or misjudgment about the essential nature, main terms, or principal motive of the object of an act.

Pope Benedict’s failed attempted partial abdication violates all three terms in this definition.  The essential object of the act of resignation of the Papacy is the renunciation of the OFFICE (MUNUS).  This is explicitly laid down in Canon 332.2, simply confirming common sense. As we have discussed several times before, an OFFICE is a state of BEING.  In order to resign the papacy, you have to renounce BEING the pope, that is, holding the OFFICE.  MINISTRY (MINISTERIUM) refers to things that the Pope may or may not elect to DO or be able to DO as a result of BEING the Pope, such as teaching, governing and presiding.  A MINISTERIUM is derivative of the MUNUS.  Ministries are OPTIONAL CONTINGENT ACTIVITIES of the ontological state of BEING the holder of the Petrine OFFICE.  As we have said before, these two MAIN TERMS, OFFICE and MINISTRY, belong to completely different categories, ‘being’ and ‘doing’, and thus can not now nor ever be argued to be synonymous in English or any other language.

As we have seen from the mountain of data already cited in this space, Pope Benedict’s PRINCIPAL MOTIVE in proffering his invalid attempted partial abdication of only the “Active Petrine Ministry” for “the governance of the Church” seems to have been long-discussed and longed-for by 20th Century Teutonic theologians, as well as Freemasons looking to destroy the Catholic Church by dissolving the Petrine OFFICE – the last remaining monarchy – into a “collegial, synodal ministry”. A second co-extant PRINCIPAL MOTIVE seems to also be coercion, which is covered discretely as an invalidating factor in Canon 188.

Since the Petrine OFFICE, established by Jesus Christ Himself, cannot be “fundamentally transformed” nor “expanded”, the PRINCIPAL MOTIVE of the OBJECT OF THE ACT was defective, that is, SUBSTANTIALLY ERRONEOUS.

Hang in there, everybody!  If you are a person who is unsure of what exactly the heck is going on with Antipope Bergoglio and the Catholic Church, my advice to you is:

-DON’T FEEL BAD. THIS SITUATION IS ABSOLUTELY UNPRECEDENTED. YOU ARE NOT DOING ANYTHING WRONG OR SINFUL BY ACKNOWLEDGING THAT SOMETHIN’ SERIOUSLY AIN’T RIGHT, AND WANTING TO FIGURE IT OUT. IN FACT, IT WOULD BE SINFUL FOR YOU NOT TO CARE ABOUT THE TRUTH.

-KEEP READING, KEEP RESEARCHING, KEEP THINKING, KEEP PRAYING. Ask the Holy Ghost to direct you to all Truth, and to illuminate the path.  Remember, the Visibility of the Church is NOT a matter of how many people see it, or claim that they can’t see it.  The Church will always be visible – lit up by the Light of Christ – but people fallen into the darkness of sin will be blinded to it. Imagine Ray Charles standing on the Las Vegas Strip.  Ray’s blind.  He can’t see it.  That doesn’t mean that Las Vegas is “invisible”. It just means that Ray is blind.

Remember the Prologue of St. John’s Gospel: And the light shineth in darkness, and the darkness did not comprehend it. Et lux in tenebris lucet, et tenebrae eam non comprehenderunt.

-Finally, stay humble, which does NOT mean check your brain at the door.  My new favorite saying comes from Our Lord’s words to St. Catherine of Siena: “Do you know, dear daughter, who you are, and who I AM? You are she who is not, and I AM, instead THE ONE WHO IS.  Never forget this, and you will never be deceived by the enemy.”  God is infinite love, goodness, truth, beauty, fidelity, power, justice, mercy, sovereignty, wisdom, holiness and faithfulness. If you put the reality of WHO GOD IS at the center of everything and never, ever forget it, you won’t need to have a degree in theology, or be a canon lawyer – heck, you won’t even need to be able to READ.  On the other hand, deny ANY of these attributes of God, or even just FORGET about them, and the Deceiver will pounce.