I was tickled to see yesterday that George Neumayr is doing what actual journalists do and has gone down to Buenos Aires to talk to the people on the ground down there who are victims of a global media blackout on any negative reportage on Antipope Bergoglio’s truly deplorable past in Argentina.

To all my Argentine readers and contacts, please do what you can to help George Neumayr get the word out about Jorge Bergoglio.  He is the closest thing to the big-time media we are likely to get.  He has already done excellent work in exposing the corruption in Washington D.C. surrounding McCarrick (codename Blanche), Wuerl (codename Donna Guerl), Bransfield, Zubik (codename The French Kisser), Rossi and that entire coven of sodomite predators.

In Neumayr’s first dispatch from Argentina HERE, he reports what we have long known: that Jorge Bergoglio is a slack-jawed imbecile, widely known to be a total ignoramus, totally uneducated and incurious about anything except his own personal power; “an uncultured, ill-mannered flake” as one person put it.  Further, Argentines have been screaming since minute one of the Bergoglian usurpation and Antipapacy that Jorge Bergoglio is – to quote one of Neumayr’s contacts – “a son of a bitch.”

If that’s not bad enough, I can add another anecdote from Rome.  A person who shall go unnamed was at a reception at which the notorious flaming sodomite Monsignor Battista Ricca that Antipope Bergoglio instantly put in charge of the Casa Santa Marta hotel that Antipope Bergoglio lives in on the grounds of the Vatican, but also installed at the Vatican Bank as “Prelate of the Vatican Bank”, was present.  This reception was around the time of a consistory of Cardinals, and the person upon seeing Ricca, went over and fake-graciously said, “Why, Monsignor, I’m surprised YOU weren’t included in this consistory!” To which Ricca replied in complete seriousness, “Yes, I know, it has been promised, and I expect the red hat very soon.”

Ricca was well-known to Bergoglio from South America. Ricca was a Vatican diplomat posted in Montevideo, Uruguay, just across the bay in essentially the same metroplex from Buenos Aires, and Ricca was a flagrant, notorious and scandalous presence, shacking up and carrying on OPENLY with his sodomite sex partner – a former Swiss Army captain named Patrick Haari. Further, Ricca was caught in flagrante delicto in an elevator with a boy child prostitute in Montevideo, and got the crap beat out of him at least once cruising for sex in a public park notorious for such evil activity. The people of Montevideo were so outraged that they rose up and demanded Ricca’s expulsion, whereupon Ricca was sent back to Rome, to resume his place in the Vatican Bathhouse. Ricca and Haari’s luggage was initially sent by Haari to the Vatican as diplomatic baggage – and the Vatican refused delivery. This luggage, when later found and opened, was found to contain a pistol, enormous quantities of sodomite pornography, and dozens of condoms. 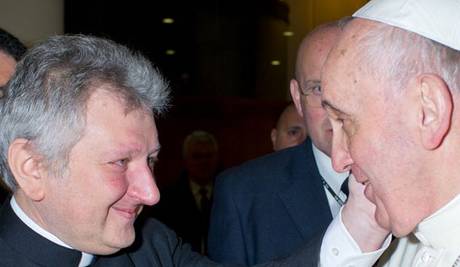