I held off on this because it is sometimes the case that geometric or other symbols simply get coincidentally repeated or co-opted, and thus people just end up looking silly for things like:

Freaking out over the Navajo use of the same shape as a decorative symbol in pottery and weaving as came to be used by the Nazis centuries later – what we now call the swastika.

Freaking out over the obvious and intuitive symbol of the Most Holy Trinity, the triangle, sometimes with the All-seeing Eye within, obviously a representation of the Triune God and His Omniscience… which was maliciously co-opted centuries later by Freemasonry (See the back of every one dollar bill.)

But this pedophile symbol thing has legs. Note that all of the vestments in the photos below are brand new, custom made for the World Youth Day in Panama. We know this because the logo of the Panama World Youth Day is clearly visible on the Cope. This isn’t a case of a 100 year old set of vestments with a geometric pattern that coincidentally matches the symbol of man-boy pedophilia concocted 20 years ago. Furthermore, liturgical blue is not a color of the Roman Rite, although there are some places in the world that have a specific permission to use Blue on Marian Feasts. There were no Marian Feasts during World Youth Day. So, the use of blue was completely outside any liturgical norms, AND the BoyLover logo, which the WYD vestments match in shape, is also specifically the color blue – as in blue for little boys.

I think we are clearly to the point where the satanist infiltrators are openly manifesting and rubbing the world’s face in their crimes. Remember, for Diabolical Narcissists the biggest rush comes from the “getting away with it”. Also, satanists are required as a condition of advancement to publicly manifest their satanism.

It is NOT unreasonable or tin-foil hatty to look at these vestments as a likely public wink and nod to pedophilia and satanism, especially knowing what we now know about Antipope Bergoglio, his Argentinian connections to child sex trafficking (Gustavo Vera in particular), Bergoglio’s interwoven-ness with the Sankt Gallen Mafia and Sodo-clerical Mafia in General, and Antipope Bergoglio’s aggressive promotion and protection of not just sodomites, but sodomites openly accused of acts of criminal assault against men, lads and children. 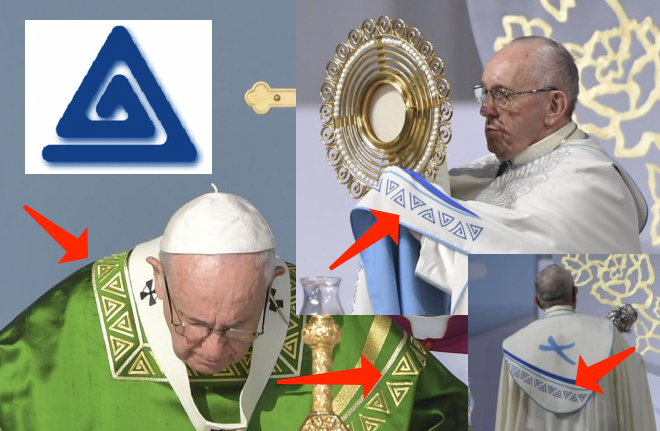