Apparently the Trad, Inc. contingent, or at least certain quarters therein, are now telling people to not go to Mass, even on Sunday, if the Novus Ordo is all that is available.

The first thing I would say is, if you have the ability, MOVE.  Make proximity to the Traditional Latin Mass or Divine Liturgy an extremely high if not the highest priority in terms of where you domicile.

BUT, if you are “trapped”, at least for the time being, impossibly far from the Tridentine Mass, then the notion that you should cease going to Mass, even on Sunday, IS 100% FALSE, AND IS A LIE FROM THE DEEPEST PIT OF HELL.  DO NOT FALL FOR THIS LIE, NO MATTER WHO SAYS IT.  YOU MUST GO TO MASS ON SUNDAYS AT ABSOLUTE MINIMUM, MOST ESPECIALLY IF YOU UNDERSTAND, EVEN ROUGHLY, WHAT IS GOING ON IN THE CHURCH TODAY.  THE THIRD COMMANDMENT HAS NOT BEEN SUSPENDED NOR ABROGATED (- AND NEITHER HAS VATICAN I.)

First, because it is always first, LOVE, specifically love of God.  If one goes to daily Mass, prays the Office, Psalm 68 (Salvum me fac…) quickly becomes a heart-rendering favorite within the Psalter, specifically verse 21-22, which shows up multiple times in Holy Week, both as the Offertory verse for Palm Sunday, and then as the opening Psalm for the Office of Tenebrae, said on Wednesday night or Thursday morning, as well as the Offertory verse of the Feast of the Most Sacred Heart of Jesus, which is said in many places numerous times per year as a Votive Mass, most especially on the First Friday of the month.  Here are verses 21-22 of Psalm 68, which directly informs the question we are now addressing:

In thy sight are all they that afflict me; my heart hath expected reproach and misery. And I looked for one that would grieve together with me, but there was none: and for one that would comfort me, and I found none.
In conspectu tuo sunt omnes qui tribulant me. Improperium exspectavit cor meum et miseriam; et sustinui qui simul contristaretur, et non fuit; et qui consolaretur, et non inveni.

And they gave me gall for my food, and in my thirst they gave me vinegar to drink.
Et dederunt in escam meam fel, et in siti mea potaverunt me aceto.

If you are reading this, the odds are very high that you have at least a vague idea of what is going on in the Church today.  We have an Antipope who is probably the False Prophet Forerunner of the Antichrist, the Institutional Church is infiltrated and overrun with sex perverts and criminals, and a Freemasonic-satanic antichurch is being erected before our very eyes with very little actual resistance.

Furthermore, if you are here reading this, you probably understand that the Novus Ordo Mass, which was promulgated in December of ARSH 1969, while VALID, was also conceived in malice by the Freemasonic-sodomite infiltrators specifically to de-catechize and Protestantize the clergy and the laity.  But, the Novus Ordo Mass is VALID, which means that the Eucharist is confected, and Our Blessed Lord comes down upon the altar, and the bread and wine are transubstantiated into the Body, Blood, Soul and Divinity of Our Lord Jesus Christ, and the once-and-for-all sacrifice of Calvary is made present by the warping of spacetime upon the altar.  Every VALID Mass is Calvary.  Period.  The entire Church Triumphant, both angels and saints, are present at every VALID Mass.  Period.

IF you understand these things to any extent whatsoever, and IF the Novus Ordo Mass is all you can possibly attend, then you ABSOLUTELY MUST go to the Novus Ordo.  Let’s think through why.

-You have a brain.  You can think things through.  You understand that the Novus Ordo Rite is VALID, yet ILLICIT.  If you understand this, how could you be scandalized by it?  Scandal is to either lose your faith OR be incited to sin in imitation of others.  If you know and understand the problems of illicitness intrinsic to the Novus Ordo, how could these things either shake your faith, or tempt you to sin? Do you actually believe that if you go to a Novus Ordo Mass that you might be tempted to break into a tambourine solo, or an interpretive dance?  Really?

Think of an eclipse.  If you know and understand the astronomical reality of what a solar eclipse is, namely that the moon passes directly between the earth and the sun, would you think that the sun was being “eaten”, or that the world was coming to an end and the universe imploding if you saw a solar eclipse?  OF COURSE NOT.  As I have said many times, the best inoculant against scandal is TRUTH.  This is why St. Francis de Sales said, “Those who give scandal are guilty of murder.  But those who allow themselves to be scandalized are guilty of suicide.”

The truth is ARMOR.  If you have the Truth, you can absolutely wage war against even powers and principalities! It’s right there, in the Bible! Ephesians 6: 11-18.

Put you on the armor of God, that you may be able to stand against the deceits of the devil. For our wrestling is not against flesh and blood; but against principalities and powers, against the rulers of the world of this darkness, against the spirits of wickedness in the high places. Therefore take unto you the armor of God, that you may be able to resist in the evil day, and to stand in all things perfect.  Stand therefore, having your loins girt about with truth, and having on the breastplate of justice,  and your feet shod with the preparation of the gospel of peace: In all things taking the shield of faith, wherewith you may be able to extinguish all the fiery darts of the most wicked one. And take unto you the helmet of salvation, and the sword of the Spirit (which is the word of God). By all prayer and supplication praying at all times in the spirit; and in the same watching with all instance and supplication for all the saints.

Note especially, folks, that last verse.  Suit up, boot up, and GO PRAY.  In this case, if one has to go to a Novus Ordo Mass, PRAY IN REPARATION.

Be the one who goes to Our Lord and “grieves together with Him, and comforts Him,” as He specifically begs us to do in Psalm 68.

PRAY FOR THE CLERGY AND LAITY THERE PRESENT.  VOLUNTEER to take on purgation of those present, but especially for the clergy, if it will help them to someday achieve the Beatific Vision.

What should you do during the Mass?  Here are some suggestions:

-When the “handshake socializing thing” happens, just make sure you are kneeling, and put your face in your hands.  Most sane people will leave you alone.  If you are physically accosted, just politely and patiently wave the person off.  What other people think of you doesn’t matter, and is technically none of your business anyway.

I am reminded again of Psalm 68, but a few verses before verses 21-22.  Let’s look at verses 13-14, which is the Communion Verse in the Mass of Tuesday in Holy Week:

They that sat in the gate spoke against me: and they that drank wine made me their song.
But as for me, my prayer is to thee, O Lord; for the time of thy good pleasure, O God. In the multitude of thy mercy hear me, in the truth of thy salvation.

Never forget that the Divine Providence is PERFECT, and that we have been placed in these times providentially.  We are called to grieve with Our Lord and comfort Him in these days.  We are called to do everything we can, by both explanation and EXAMPLE, to help other people know the truth, and thus also to be inoculated against scandal. We are called to penance, both for ourselves, and for others. Remember, WHERE SIN ABOUNDS, GRACE ABOUNDS ALL THE MORE.

If you stop going to Mass on Sunday and break the Third Commandment, you are risking mortal sin, most especially if YOU UNDERSTAND THE CURRENT SITUATION.  If you are in possession of the armor of TRUTH, and you not only refuse to fight, but go totally AWOL, that is a “capital offense”. As in “firing squad at dawn.”

DO NOT, DO NOT, DO NOT STOP GOING TO VALID MASS, even if the Novus Ordo is the only possible option. If you stop going to Mass, if you refuse to “grieve with and comfort” Our Lord at Calvary, satan wins.   If you declare that the selfsame Mass at which all the Angels and Saints come and cry out, HOLY, HOLY, HOLY, Lord God of Hosts! Heaven and earth are full of Thy glory! Hosanna in the highest! Blessed is He that cometh in the Name of the Lord! Hosanna in the highest! is simply impossible for you to deign to attend, then I dare say you risk God honoring your desire to be excluded from said company for all eternity. 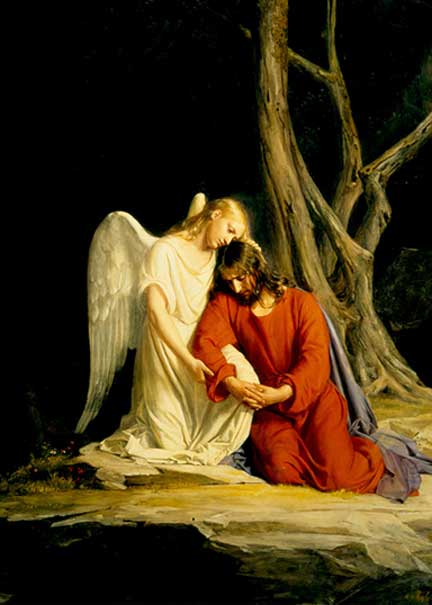