Let us open with a quote from the new MUST-HAVE BOOK: “The Divine Right of the Papacy in Recent Ecumenical Theology” by J. Michael Miller, ARSH 1980, (who is now the Archbishop of Vancouver).  Let us quote the opening words of Chapter NINE, “Lutheran-Catholic Dialogue”, emphases mine, with screen cap below:

In ecumenical dialogs the question of papal primacy was long avoided.  Theologians preferred to discuss a series of other controversial questions before taking up the papacy, the one teaching which all non-Catholics reject.  When Paul VI said to the members of the Secretariat for Promoting Christian Unity that “the pope… is without doubt the most serious obstacle on the road to ecumenism,” he articulated the difficulty which all ecumenists recognize. The first bilateral conversations on the ministry and related themes shied away from any lengthy discussion of papal primacy.

The taboo against broaching the question of the papacy has been lifted by recent discussion. Whereas Catholic ecumenists have concentrated their attention on ways of restructuring the papal office in order to make it more attractive to non-Catholics, some Lutherans have moved towards a critical acceptance of a reformed papacy. 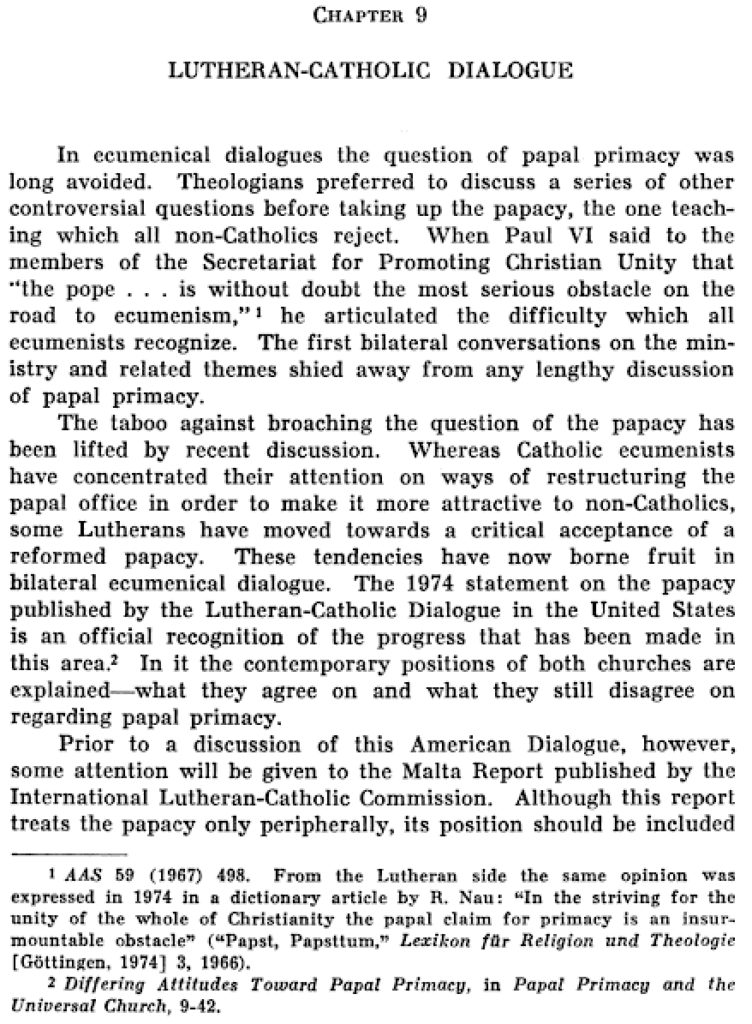 I believe that Pope Benedict’s motive in wanting to “fundamentally transform the papacy into a collegial, synodal ministry” was to appease the Lutherans (and Anglicans) so that he, Joseph Ratzinger, would go down in history as the man who “healed the Protestant schism”.  I’m afraid that we all severely underestimate the role of PRIDE in the heart of Pope Benedict XVI in this massively erroneous mess.  Look again at +Ganswein’s speech from the Gregorianum of 20 May, ARSH 2016. Remember, Pope Benedict read and approved this speech.  Emphases mine.

Indeed, I must admit that perhaps it is impossible to sum up the pontificate of Benedict XVI in a more concise manner. And the one who says it, over the years, has had the privilege of experiencing this Pope up close as a “homo historicus,” the Western man par excellence who has embodied the wealth of Catholic tradition as no other; and — at the same time — has been daring enough to open the door to a new phase, to that historical turning point which no one five years ago could have ever imagined. Since then, we live in an historic era which in the 2,000-year history of the Church is without precedent.

And I, too, a firsthand witness of the spectacular and unexpected step of Benedict XVI, I must admit that what always comes to mind is the well-known and brilliant axiom with which, in the Middle Ages, John Duns Scotus justified the divine decree for the Immaculate Conception of the Mother of God:

That is to say: it was fitting, because it was reasonable. God could do it, therefore he did it. I apply the axiom to the decision to resign in the following way: it was fitting, because Benedict XVI was aware that he lacked the necessary strength for the extremely onerous office. He could do it, because he had already thoroughly thought through, from a theological point of view, the possibility of popes emeritus for the future. So he did it.

As a German, I think Joseph Ratzinger wanted to be nothing less than the man who “fixed” the German schism, that is to say, the Lutheran schism.  And, if you bring the Lutherans back in, the Anglicans will eventually follow, because both schisms revolved around the Papacy.  And so, in one of the most massive displays of pride the Church has ever seen, Pope Benedict Ratzinger decided that he could change that which is IMMUTABLE – that he could change the unchangeable.  Except he didn’t.  All he did was slam into an infinitely large reinforced concrete monolith (the Truth) at 100mph.  The wall did not move or change.  All that Pope Benedict achieved was causing a massive, flaming mess, which he survived as the one and only living Pope, whether he likes it or not. The Truth, and the Papacy, remain fully intact.

Let’s do a quick review of the German Church Tax, or Kirchensteuer.  Many Americans are unaware of this, and shocked when they learn about it.  In Germany, there is a MANDATORY 8% tax that is levied on top of one’s income tax due.  In order to NOT pay the Church Tax, one must formally, in writing, APOSTASIZE from whatever Christian church one was baptized into. For Catholics, this means that they may not partake of the Sacraments, their children may not be baptized in the Church, and they may not receive a Catholic funeral.  Yes, this is simony. No question.  And it is one of the primary reasons that the German Church should be put under interdict.  For Protestants it is the same, although the stakes are considerably lower for them, considering….

Here is a sample calculation of the German Church Tax.  All figures are made up and simplified.

In ARSH 2016, despite the fact that the practice of Christianity in any form in Germany is almost completely gone, and despite the fact that Germans are formally apostasizing by the hundreds of thousands every year in order to not pay the Kirchensteuer, the Catholic Church in Germany received Kirchensteuer revenues of €6 BILLION.  That was $7.2 BILLION.  The total assets of the German Catholic Church are estimated to be AT LEAST €26 BILLION.

Now, consider this: the Protestant churches in Germany (mostly Lutheran) are about equal in terms of numbers of people.  Germany is split fairly evenly Catholic-Protestant.  Godless, faithless wretches like Cardinal Walter Kasper are desperate to appease the Lutherans and get some sort of formal “re-unification” on the civil books WITH AN EYE TOWARD FOLDING THE LUTHERAN KIRCHENSTEUER REVENUES INTO THE CATHOLIC SLUSH FUND, WHICH WOULD COME CLOSE TO DOUBLING THE ANNUAL REVENUES.

For filth like Kasper, and almost all of the rest of the German prelates, this is all about POWER, with MONEY being the manifestation and measure of power.  For many of them sex/sodomy is also in play as a manifestation of power, but I think the POWER of MONEY is what drives Kasper.

Kasper has been and continues to be at the absolute forefront of the attack on the top two Catholic dogmas needed to appease the Lutherans:  The indissolubility of marriage, and the Papacy.  The heresy that Antipope Bergoglio has pushed from day one of his usurpation regarding the acceptance of divorced and civilly “remarried” persons (that is, public, unrepentant adulterers) to receive Holy Communion is CALLED THE KASPER PROPOSAL.  And remember this scandal, when Antipope Bergoglio went to the Lutheran church in Rome, and when asked by a Lutheran woman if she could receive Holy Communion with her Catholic husband, Antipope Bergoglio said THIS (citation from LifeSiteNews):

The pope (sic) began his answer to the Lutheran woman evoking laughter and applause as he said, “The question on sharing the Lord’s Supper isn’t easy for me to respond to, above all in front of a theologian like Cardinal Kasper – I’m scared!” Cardinal Walter Kasper, the man responsible for the initial suggestion to allow Communion for remarried divorcees, accompanied the pope (sic) on his visit to the Lutheran church.

And as we can see from the screen cap below from the Index of Names in Miller’s text, Kasper was and is at the very heart of the madness of “restructuring the Papacy in order to make it more attractive to non-Catholics”. 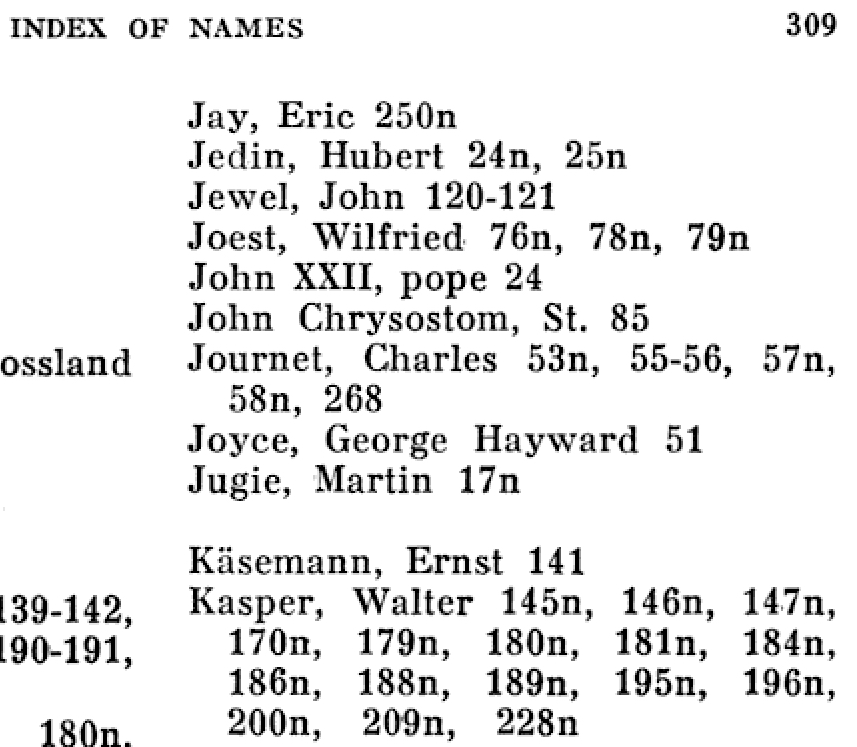 Journalists need to go after Kasper.  Might I recommend the following question?

Q. Cardinal Kasper, do you believe that Pope Benedict’s fundamental transformation of the Papal Office into a synodal ministry opens the door to more robust and fruitful ecumenical dialogue with Lutherans and Anglicans?

And then just let the faithless money grubbing scumbag talk.  But make darn sure your phone’s battery is fully charged.

I hope this helps, and that everyone is having a wonderful Christmas.

Finally, I would like to conclude this post with a quote that was sent to me by a reader, from St. Philip Neri, who is very closely joined to this entire endeavor, and is one of its patrons:

“Besides pardoning those who persecute us, we ought to feel pity for the delusion they are laboring under.”
-St. Philip Neri