The accusation is that the notion and idea of Pope Benedict’s attempted resignation being invalid due to the Substantial Error clause in Canon 188 is “insanity” because “there is no evidence that the notion of fundamentally transforming the Papacy by bifurcating the Papacy into a “shared ministry” with a “contemplative member” and an “active, administrative member” entered Pope Benedict’s mind.”  It is further argued and cast as insanity that the distinction in Pope Benedict’s attempted resignation statement between the “munus” (Office) and “ministerium” (Ministry/Administration) has any meaning, and the words are used unthinkingly as pure synonyms.  It is argued that these very notions are “desperate grabbing at straws” and “insanity”, or indicative of insanity.

Among German theologians of the 1960s and 1970s, with Joseph Ratzinger squarely and prominently at the core of the discussion, the question and desire to “fundamentally transform the Petrine Office”, namely to “DISSOLVE the Petrine Office” in favor of a “collegial, synodal PETRINE MINISTRY shared among multiple living people simultaneously” was not only discussed, it was one of the more popular topics of the day, with a veritable MOUNTAIN of texts, mostly in German, written and published.

We have found, however, a text, written in English in ARSH 1980, that is a synthesis and compendium of all of these (mostly) German theologians’ positions, written by the current Archbishop of Vancouver, J. Michael Miller.  I highly recommend that anyone with even the slightest interest in WHO THE VICAR OF JESUS CHRIST ON EARTH REALLY IS go ahead and buy this text:

“The Divine Right of the Papacy in Recent Ecumenical Theology” J. Michael Miller, 1980 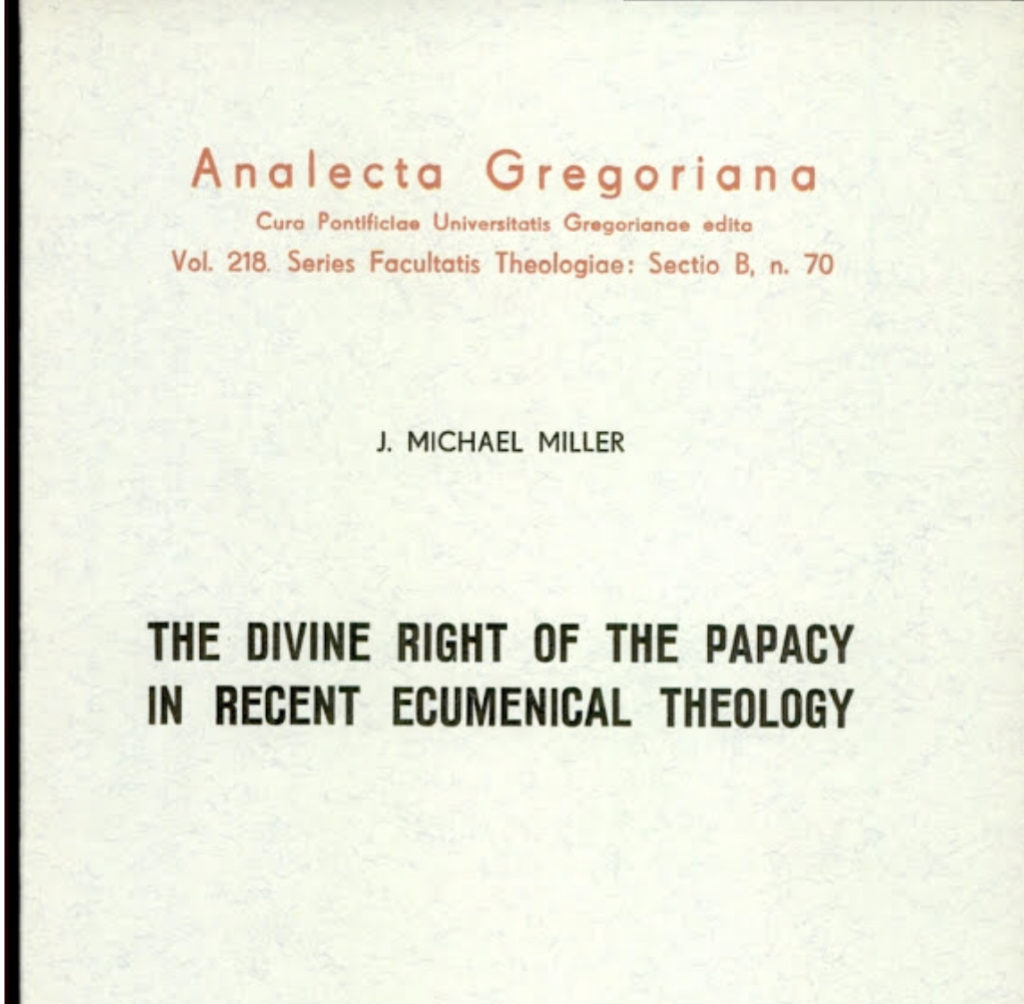 Joseph Ratzinger is cited and footnoted many times throughout this book.  He was at the center of the conversation along with his mentor and close friend, Karl Rahner; Hans Kung; his close associate at the University of Tubingen with whom he co-edited a 150 year retrospective compendium of the works of the Tubingen faculty, Johannes Neumann; and wait for it… WALTER KASPER. Even the American Avery Cardianal Dulles is prominently footnoted.

Again, in the interest of getting to the point ASAP, here is a screen cap of pages 196 and 197 from Chapter 8, “Contemporary Catholic Views on Papal Primacy Iure Divino”, Section 4, “Irreversibility of the Papacy” wherein Ratzinger is footnoted, and Ratzinger’s mentor and close friend, Karl Rahner is cited in Footnoted 102 stating almost word-for-word what Archbishop Ganswein stated in his May 2016 address at the Gregorianum.  So that the text will populate onto search engines, I retype that which is shown in the screen caps below:

“[Heinrich Stirnimann, for ex-]ample, holds that “the papacy as an historical form can disappear without harming the faith, in order to allow a new expression of the Petrine Ministry.” (Footnote 101)  By making use of this terminology belief in a necessary Petrine function is affirmed; at the same time the historical form it has taken in the papacy is not absolutized.

In ecumenical discussion, theologians often use this distinction between the Petrine function and the papacy, even though it is not free from ambiguity.  Non-Catholics draw conclusions from it which most Catholics would be unwilling to draw.  Although they might leave open the possibility of some different configuration of the Petrine office in the future, the majority of Catholic theologians hold that primatial authority must be personally exercised by a bishop who is recognized as the successor of St. Peter. (Footnote 102).  Their use of the Petrine function-papacy distinction is more focused on the possibility of change in the historical form of the papacy, in order to emphasize the many realizations of the Petrine ministry which are open to the Church of the future.  They do not separate the two in any radical way which would suggest that the pope is not the necessary bearer of the Petrine ministry.

The possible changes in the shape of the papacy that theologians envisage demonstrate that irreversibility and immutability are not the same.  In order to show a degree of openness to change compatible with holding that Roman primacy is of divine right, a few proposals can be mentioned.  First, some theologians maintain that when the papacy is situated within the context of other institutions of divine right, then its own relation to the constitution of the Church as an essential element is clarified.  In spite of its importance, the papacy is still just one of the irreversible elements in the Church’s structure. (Footnote 103)  Secondly, other proposals concern the need for changes in the way in which primatial authority is exercised: from a monarchical or centralist model to a more collegial and decentralized one. (Footnote 104) Thirdly, an important change in the papacy would occur if the process was clarified by which Rome has united under a single title its unique primacy originating from a special apostolic charge conferred by Christ, and its administrative role for the Western Church originating from its patriarchal status.  The pope has not adequately distinguished his exercise of Petrine authority from patriarchal authority. (Footnote 105 Ratzinger) If a careful distinction is worked out between these two roles, much of what the pope has absorbed into his primatial authority might again be seen as an exercise of his patriarchal authority.  All these proposals demonstrate that when contemporary theologians apply ius divinum to Roman primacy they do not thereby imply that there can be no changes in the way papal authority will be exercised in the future.

Footnote 102:
In this regard Rahner does not share the opinion of the majority. He holds that the Church can distinguish between and individual and a moral person as the bearer of apostolic authority.  In the case of the episcopacy, for instance, it is not its monarchical dimension which is iure divino, but the need for the presence of episcopal authority in every local church.  It is possible therefore that a small group of persons or a central body possess episcopal authority (“Basic Observations,” 19; cf. “Open Questions on Dogma,” 215-216).  Later he applies the same argument to papal primacy (Amtsverstandinis, 25-32).  In this case the Petrine function would exist iure divino, but not need to be exercised by a single individual.  Cf. J. Neumann, “Eine Verfassung fur die Freiheit,” Wort und Warheit 23 (1968) 387-400.  Dulles makes the same point as Rahner: “In theory, the Petrine function could be performed either by a single individual presiding over the whole Church, or by some kind of committee, board, synod or parliament – possibly with a ‘division of powers’ into judicial, legislative, administrative, and the like” (“Papal Authority,” 55).  See a favorable Protestant reaction to this idea of a “shared papacy” in Andreas Lindt…. (see screen cap) 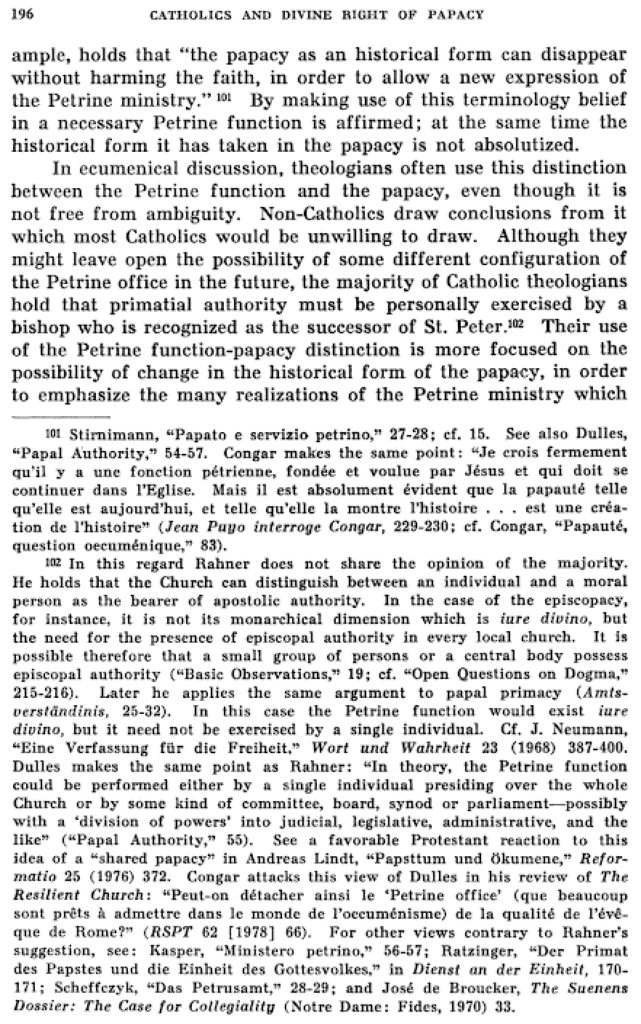 WITHIN THE SPECTRUM of these theologians, Joseph Ratzinger was actually on the more conservative side, which is damning with faint praise, indeed.  There was OPEN TALK in this circle about the ABOLITION OF THE PAPACY OUTRIGHT by Kung, Rahner, Neumann and others. Ratzinger denied this possibility of total abolition, but did argue that the Papacy was NOT immutable (unchangeable), could be changed, and could be “synodalized” along the lines of Petrine Office vs. Ministry AND along the lines of Petrine vs. Patriarchal.

Antipope Bergoglio’s IMMEDIATE refusal to refer to himself as anything other than the Bishop (aka Patriarch) of Rome, AND his immediate citing of Cardinal Walter Kasper as his “favorite theologian”, who was up to his eyebrows in this business of, as Rahner termed it, “the dissolving of the Petrine Office” as a means of appeasing the Lutherans – now ECHOES SO MUCH THE LOUDER in the ears of every honest and Godfearing Catholic.

I’m going to wrap this post up here, just to keep it short, but there are several things that need to happen:

EVERYONE BUY THE BOOK BY J. Michael Miller and READ IT.  Chapters 7 and 8 are jaw-dropping.

I need my German readers (God bless you!!) to get to work on poring over these German texts that are cited in Miller’s bibliography and footnotes.  We need the key passages, and we need them translated into English.

We need JOURNALISTS to go to Archbishop Miller who is currently the Archbishop of Vancouver and start asking questions.

Again, what this proves is that this CONCEPT of transforming the Papacy, splitting it into a synodal, collegial ministry shared by multiple people simultaneously HAD BEEN IN POPE BENEDICT’S MIND, WITHOUT ANY DOUBT, SINCE the MID-1960s AT THE VERY LATEST.

He wanted to quit, which has been a life-long habit of his, because he saw how utterly overrun with corruption the Vatican and Institutional Church were (and we will leave the question of coercion for another day) and so he retreated to this wildly erroneous “hypothesis” that he and his closest friends and colleagues had been discussing, debating and publishing on at length for OVER 45 YEARS, and actually attempted it.

His attempt to do this madness – analogized in its uniqueness and enormousness to nothing less than the Immaculate Conception by Archbishop Ganswein – of course, FAILED because the Petrine Office, instituted by Jesus Christ Himself and recorded in the Gospels, is IRREVERSIBLE AND IMMUTABLE.  Any other position is SUBSTANTIALLY ERRONEOUS, and any attempted resignation of the Papacy proffered under the false premise of a REVERSIBLE, CHANGEABLE Papacy is INVALID BY THE LAW ITSELF.

It does not matter whether or not you, I or anyone else, including Pope Benedict HIMSELF “wants” him to be Pope.  Ontological realities have NOTHING to do with “wants” nor with “numbers”.  All that matters is the TRUTH of what IS. An error held unanimously is still an error.  A truth universally denied is still the truth.  Appeals to “wants” or “numbers” are pathetic, and should be taken as de facto concessions of the argument itself.

I would like to acknowledge and thank my German readers, and also to the author of the NonVeniPacem blog, without whose invaluable help this discovery would not have come to light, at least not any time soon.