Matt 8:23-27
At that time, Jesus got into a boat, and His disciples followed Him. And behold, there arose a great storm on the sea, so that the boat was covered by the waves; but He was asleep. So they came and woke Him, saying, Lord, save us! we are perishing! But He said to them, Why are you fearful, O you of little faith? Then He arose and rebuked the wind and the sea, and there came a great calm. And the men marvelled, saying, What manner of Man is this, that even the wind and the sea obey Him?

The Poop is the raised deck or cabin in the stern (the hinder part) of a boat or ship.  That is where Our Lord was having His little snooze.

The Bergoglian antipapacy is by far the worst tempest to ever toss the Barque of Peter.  The past heresies, especially those in the first thousand years of the Church, including Arianism, Donatism, Manichaeism, etc., were all – I can’t believe I’m typing this – SUBTLE compared to what is going on now.  What is going on now is new territory – the denial of the NATURAL LAW, which by definition human beings can easily know and understand even OUTSIDE THE CHURCH.

All human cultures know and understand marriage.  All human cultures know that sodomy is wrong.  All human beings, including those who NEVER knew or know the Church will be judged on the Natural Law.  The pre-Columbian Amazon Basin dweller was/will be judged on the sin of Sodomy, because sodomy is known to every human being as grave sin through the Natural Law.

The Bergoglian antipapacy denies and seeks to destroy even these obvious truths, known to all through the Natural Law.

But, we must trust Our Lord, even though it seems that He is having a nap while this all goes on.  How can we be surprised by this?  How can our faith be shaken when there have been countless prophecies and apparitions of Our Lady warning of exactly these events, as it is now crystal clear?  Cardinal against Cardinal and bishop against bishop, mass apostasy, an antipope, confusion about who actually is the pope, a “destroyer pope”, the False Prophet Forerunner of the Antichrist and on and on.  La Salette, Akita, Fatima, St. Franics….

And, as I and many others have said over and over again, how could we POSSIBLY expect God to continue to bless a culture that is the largest cult of child sacrifice, sodomy and theft ever seen in human history?  How could we expect God to turn a blind eye to the sacrilege and heresy that is endemic to almost every Novus Ordo Mass offered on the planet for the last 49 years – while the entire Church sat in the silence of complicity, more concerned with worldly approval than the Sacred, Wounded Heart of Our Blessed Lord, and His Mother?

So, yes, He is sleeping under the poop as the storm rages, but we must remember His admonition: Why are you fearful? have you not faith yet?

He will rise up, and He will say, “Peace, be still.”  And the Barque of Peter will be saved from these devils, and it will lower its nets and bring in a great harvest of souls.  We know this.  We CANNOT doubt this.  So, while I, in my weakness, like everyone else, keep thinking, “Please wake up, please wake up, we’re dying, we’re dying”, -these very words are in today’s Gospel and repeated again as nothing less than the antiphon of the Magnificat at Vespers:

Lord, save us: * we perish; give the word, O God, and let there be a great calm!

I am just going to go back to the poop deck and kneel down next to Him, stare at His Holy Face and keep whispering: Wake up, wake up. Save us. We are perishing.

See you on the poop deck! 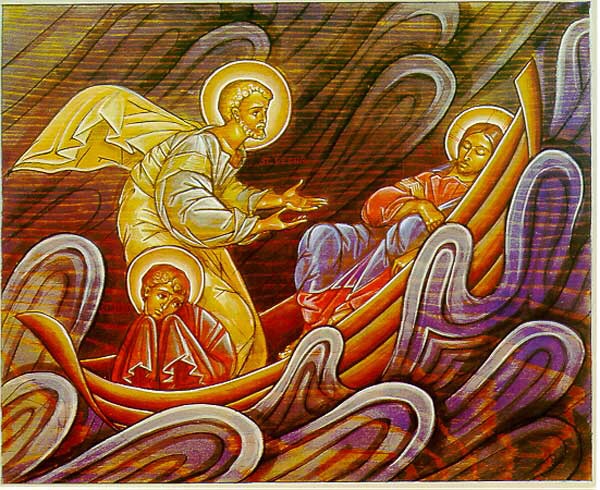 Wake up… wake up.