Across the transom comes this photo of a parish bulletin from a parish in Boston – Newton, Mass to be precise.  In it, the “Lay Pastoral Associate” – whatever the hell THAT is – essentially tries to execute a mafia shake down of the parishioners who have clearly reduced their cash tithing now knowing that Cardinal Sean O’Malley and his chancery are up to their eyebrows in the sodo-clericalism and enabling and protecting of faggots and in massive financial corruption. 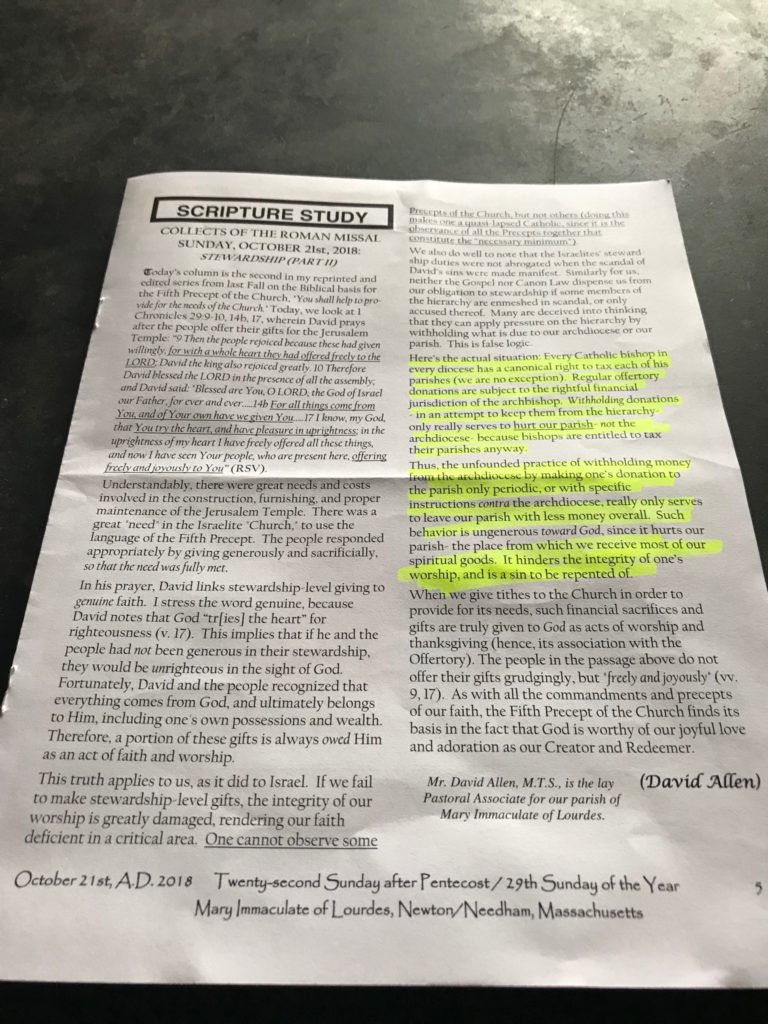 Didn’t you hear?  Guess who is now Chairman of Auntie Blanche McCarrick and Donna Wuerl’s $200,000,000 slush fund, “The Papal Foundation”?  Yep.  Bergoglian henchman Cardinal “Call Me Shawna” O’Malley.  Note that Donna Guerl is still very much on the board, and is probably still totally running the show.

The point is, the money men are now starting to sweat to the point that they are threatening parishioners and telling them that if they tithe in any form OTHER than non-directed Federal Reserve Notes (electronic preferred!), that they are committing sin. Oh, and read the last paragraph: this guy has the unmitigated gall to not only demand undirected FRNs, but that the money must be handed over JOYFULLY. Manipulative much, David?

Um, no.  Tithing can be done in many ways, including in kind, which means things like labor.  Cleaning, yard work, linen cleaning and ironing, silver polishing, etc. Also consider tithing by buying supplies for the parish, candles, flowers, sponsoring coffee and donut time, parish picnics and events, by buying meals, household supplies and toiletries for the priests, by putting gas in Father’s car, paying for oil changes, new tires and other upkeep on Father’s car, the list is pretty much endless.

Further, if one KNOWS that one’s cash tithes are going to the building up of the Antichurch, to fund a WAR AGAINST JESUS CHRIST AND HIS HOLY CHURCH BY MODERNISTS, and to the attached cult of sodomy as the Archdiocese of Boston is so massively infiltrated by, then the knowledge that you are handing these people completely fungible assets could TRULY “hinder the integrity of one’s worship”.

I am reminded of the grifter beggars that one sees, feigning starvation and total destitution, and when someone offers to buy them a sandwich, or some socks or some such, they refuse, demanding only CASH.  Why?  Because they want the money to buy alcohol and drugs.  They want that FUNGIBLE ASSET.  Then, if you don’t give them cash, they curse you.  Or, in this case, call you a sinner who in un generous towards God.  Whatever, David.

Finally, remember this: short of being arrested and frog marched in shackles to stand trial for RICO violations, the cutting off of the money IS ALL THESE BISHOPS AND THEIR TOADIES UNDERSTAND.  They don’t fear God, and many of them actively hate God.  You cannot appeal to morality, human decency, even shame to any of them.

With regards to the parish priests, they aren’t guiltless in this either.  They have cowered in fear and WATCHED IN SILENCE while men they knew to be wildly corrupt, heretics and sex perverts have taken over and essentially leveled the institutional Church completely uncontested.  Our Lord called them “Faithless Hirelings”.  The only thing that will get these so-called “good priests” to FINALLY man-up and defend the sheep and fight back against the sodomite heretics and finally stand up for Jesus Christ and His Holy Church is, sadly, the same thing: cutting off the cash.

Pray for this parish.  By the looks of the parish website, it might be the best diocesan parish in the Boston area.  The Traditional Mass is offered there regularly.