Pope Paul VI Montini was an active sodomite, including while he was Pope, having his preferred sodomy partner, the Italian actor Paolo Carlini, inside his apartment in the Apostolic Palace, with Carlini seen running the halls in the wee hours of the morning. Montini, as is typical of sacriligious sodomites, took his Papal name not in homage to the Apostle Paul, but rather as a sacriligious winking “inside joke” amongst the sodomite coven already infesting the Church, after his Italian moviestar sodomy pattern, Paolo Carlini.

Paul VI Montini would not infrequently be found by the staff of the Apostolic Palace lying on the floor of his bedroom in the fetal position, sobbing uncontrollably.

Paul VI was an active and ardent supporter of Communism and Communists, betraying and deposing Cardinal Minszenty of Hungary to appease the Communists, and taking over the ultimately failed Second Vatican Council in order to scrap the main objective of the original schema of the Council, to denounce Global Communism.  Not only was Communism never mentioned, but Paul VI was sure to invite KGB agents posing as Russian orthodox clergy to “observe” the failed Council. While Montini was the Archbishop of Milan, it was openly said that “Montini doesn’t hear church bells, he only hears factory whistles.”

Paul VI Montini, like Antipope Bergoglio, despised Marian devotion and had “an aversion to the Rosary”.

Paul VI did NOT write the section of Humanae Vitae which restated the immemorial and unchanging teaching of the Church condemning contraception.  He originally wrote (or his ghostwriters wrote) Humanae Vitae to PERMIT contraception.  It was Cardinal Alfredo Ottaviani, head of the CDF, who after reading the draft submitted to the CDF, removed Montini’s wicked attempt at keeping his promises to his Freemason and sodomite friends to open the door to the mortal sin of contraception, and instead replaced it with the passages so often quoted today.  This is one of the clearest examples of the reality of the negative protection of the Papacy from teaching error on faith or morals by the Holy Ghost.  After Humanae Vitae’s promulgation, Paul VI ACTIVELY PERSECUTED priests and bishops who publicly defended the very document that Paul VI himself promulgated, and rewarded priests and bishops who openly, publicly dissented from it.

Most importantly, Paul VI Montini promulgated and oversaw the implementation of the so-called “New Order of the Mass” – the Novus Ordo.  This was the single greatest act of violence ever done to God and His Holy Church since Pentecost, resulting in the near-instantaneous (by historical standards) collapse of the Catholic Church in the West.  In many places, the Mass was so thoroughly debauched, Protestantized and feminized within SIX WEEKS of its promulgation in ARSH 1969 that many poorly-formed albeit still-practicing Catholics INSTANTLY apostasized, never stepping foot in a church again, dying outside the Church, in mortal sin, and without the Sacraments.  Paul VI SAT AND WATCHED as Catholic liturgy in the west descended into an horrific chaos of ugliness, feminism and mockery of Jesus Christ, Calvary, and the Eucharist itself.

It is interesting to note that Pope Benedict XVI, the one and only living Pope, declined to attend today’s sickening mockery and spectacle.

Paul VI is not a saint. He should not be mentioned as an intercessor.  IF Paul VI somehow repented of all his enormous wickedness and somehow made it through his particular judgment, he is almost certain to be in Purgatory for a very, very, very long time, and would be the very first person to tell you that nothing about his wretched life was virtuous or anything to be emulated.  IF Paul VI isn’t in hell, and eventually achieves the Beatific Vision, it will be one of the highest examples of God’s infinite mercy.

What happened today is just another in a five and a half year long series of events that clearly shows us that Bergoglio isn’t the Pope.  It isn’t a proofset in and of itself, but it is YET ANOTHER confirming datum that should make every clear-thinking, virile person who insists upon dealing with objective reality look at the events of February ARSH 2013 and see the obvious invalidity of Pope Benedict’s attempt to partially resign the Papacy.

Cardinals Mindszenty and Ottaviani, pray for us and for The Church. 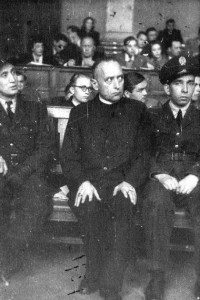 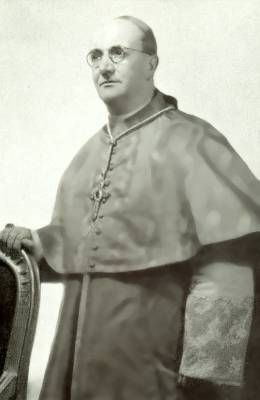