Important email over the transom from an RN who listened to Barnhardt Podcast #064 and was VERY interested in the discussion of stealth forms of witchcraft infecting mainstream culture under the guise of “alternative medicine”.  “Reiki”, in particular, got this RN’s dander up.  Interestingly, in Japanese, the character for “reiki”, which is claimed to mean “spirit energy” is a double-meaning character whose OTHER meaning is… wait for it… “demon”.

I have a linked above an article that I came across several years ago.  At that time it stuck out to me because in the late 1990s/early 2000s, I worked in this same ICU where, quite frankly, the patient in the photo is being preyed upon by practitioners of reiki.  When I saw this article, I was mortified – the man in the photo is unresponsive and obviously vulnerable, yet this nurse is inflicting something on him with very real consequences on his soul.  I felt compelled to send this to you because I want people to be aware that this satanic garbage is being inflicted on unsuspecting & non-consenting patients at MAINSTREAM AMERICAN HOSPITALS.  Thank goodness for me that this garbage happened after I left that job, but please warn people to never be without their brown scapulars and to let their family members know that should they ever be in this situation they are not to receive these demonic “treatments”.  As a registered nurse, I am embarrassed that educated professionals would embrace this quackery. 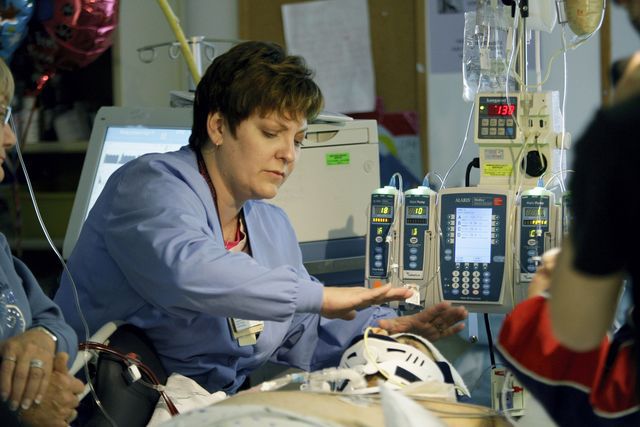 Registered Nurse performing an occult ritual over a completely incapacitated man in I.C.U.

Regarding your comments on yoga, I, too avoid it based on the warnings of various exorcists, but honestly I don’t know anyone who feels the same. It has become so incredibly mainstream that even parishes (Novus Ordo, of course) have yoga groups.  I even had a priest in confession advise me to take up yoga as a form of relaxation.  Its infuriating and frustrating that the laity have to be the ones to sound the alarm on the spiritual ramifications of yoga because priests are either unwilling or uninformed.  I believe firmly that the rise of so much evil in our culture is related to this portal of entry being opened by all the middle aged housewives, millennial, hipsters, etc contorting their bodies into these demonic poses (as well as the reading of Harry Potter, tarot cards, horoscopes, etc etc etc but I digress).  Thanks for talking about this as it is so important.

I realize I haven’t said anything you don’t already know; I only want people to understand that just because they aren’t seeking an “alternative medicine”, it may be inflicted on them anyway.  Thank you again for covering this topic.