Might this answer your question?  These social-climbing psycho trash all flock together.  All that matters to them are the social scene, the decadent lifestyle, and the false sense of being part of an elite clique. I wonder if Liz Lev told her new BFF all the nasty things she used to say about her appearance BEFORE she became Ambassador to the Holy See and thus became a target of Lev’s shameless ass-kissing? Power, power, power, power, power….. 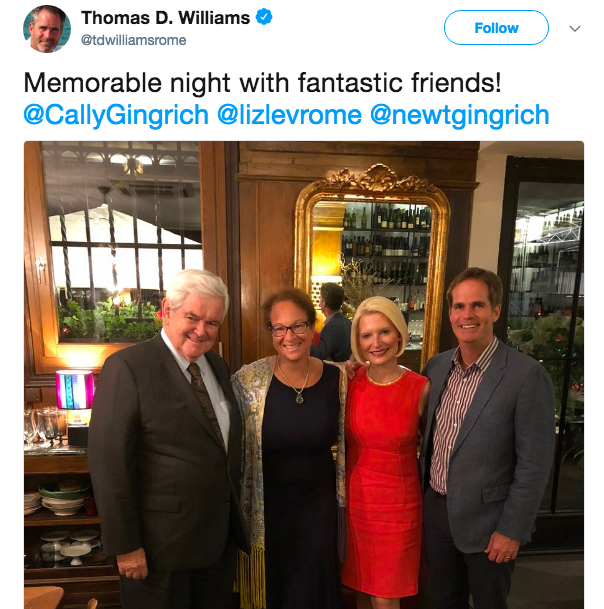 Another thing that you shouldn’t wait for is for Mrs. and Mr. Lev’s mother, Mary Ann Glendon, to say anything – even though Mary Ann Glendon was on the board of the VATICAN BANK up until just a few months ago, when she quietly resigned.  Are you telling me that Mary Ann Glendon, having been on the board tasked with cleaning up and auditing the Vatican Bank has NO INFORMATION that might be pertinent?  That she saw NOTHING untoward?  That she resigned to…wait for it… spend more time with her family?  Give me a break.

Some journalist should find Mary Ann Glendon and ask her what she knows (hint – Lev and Williams were just ensconsed at the – I promise I’m not making this up – Notre Dame Center for Ethics.  You might look for her hanging around South Bend.)

This just across the transom – check out the Tweet reply.  Looks like the gild is coming off the lily on the Liz Lev – Thomas Williams racket. Maybe some of you folks who still use Twitter should cruise over and leave a comment too. 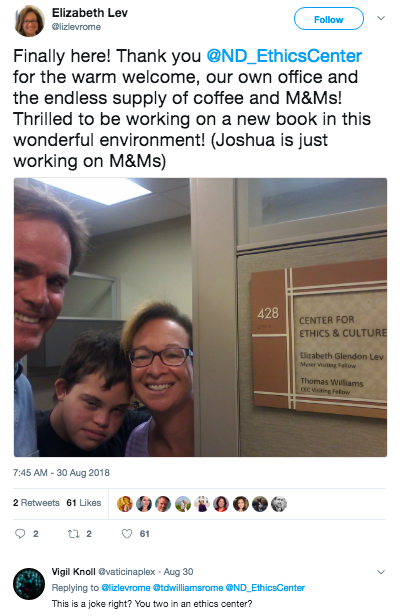 What a couple of shameless grifters.  Get a load of this: