Across the transom comes this jaw-dropping hypocrisy from none other than “The Horndog of Rome”, aka Mr. Liz Lev, Breitbart “Rome Bureau Chief” (snorf – if a laptop set up on Liz Lev’s dining room table constitutes a “Bureau” then I officially declare myself “Editor in Chief of the United Federation of Planets), [Father] Thomas Williams: 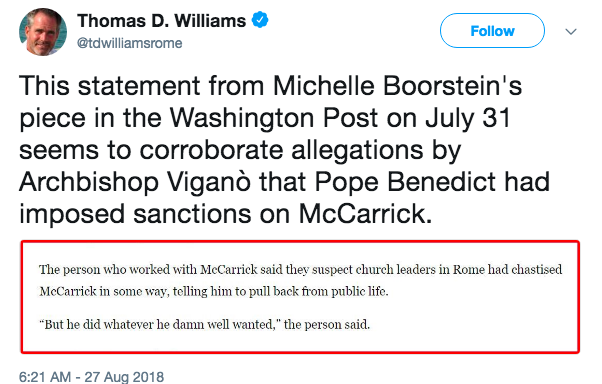 Well, Mr. Lev, YOU’D KNOW about “doing whatever you damn well wanted” after being ordered by your superior to pull back from public life after being caught as a sacrilegious fornicator.  Folks, that is EXACTLY what Father Thomas Williams did in 2005 when he was ordered by his superior, Fr. Alvaro Corcuera, to end his public ministry after Williams fessed up to Corcuera that yes, the open-secret rumors were true, and that he had fathered Mary Ann Glendon’s grandson by Glendon’s spawn, Liz Lev. Williams, EXACTLY LIKE MCCARRICK, not only disregarded the orders, but actually mashed the throttle, appearing on CBS and NBC news frequently, and launching his ghostwritten book career.  Williams, EXACTLY like McCarrick, carried on in brazen contempt and disobedience because Williams had the ability to destroy the Legion of Christ, just as McCarrick had the ability to bring down the entire United States Bishops Conference, AND the Roman Curia.

But there’s another angle here that really needs to be appreciated, that is germane to what is going on with McCarrick and all the rest of these filthy faggots chasing and in some cases raping seminarians.  Fr. Thomas Williams didn’t throw in the towel and leave the priesthood because of his open affair Liz Lev.  Oh no.  The reason Williams bailed in 2013 is because the dossier that was presented to the Congregation for the Doctrine of the Faith on him mainly focused on the fact that WILLIAMS WAS OPENLY HAVING SEXUAL RELATIONSHIPS WITH HIS STUDENTS AT THE PONTIFICAL UNIVERSITY IN ROME OF WHICH HE WAS THE DEAN OF THE DEPARTMENT OF MORAL THEOLOGY.  EXACTLY LIKE MCCARRICK, Thomas Williams used his power over students under his authority in order to procure sex and sodomy.

You will note that up until this point, the sex-neutral word “students” has only been used with regards to Father Thomas Williams’ sexual activity at Regina Apostolorum.  While there are female students at Regina Apostolorum, there are also many, many laymen and seminarians.  Yes, Williams was having sex with female students, BUT, it is widely understood in Rome that Williams, who like his concubine Liz Lev, has a penchant for high-end designer clothes (ahem), was also having sexual relations with MALE students.  The Legion of Christ was founded by Maciel for the sole and express purpose of acquiring money and SODOMY with boys and lads through the Legion’s schools and seminaries.  There are countless tales of lads being recruited into the Legion cult, sent to seminary, RAPED, and then discarded like so much trash. Thomas Williams was the #3 in this organization, and Maciel’s trusted roommate.  Do the math, folks.

The bottom line is, the Williams Dossier needs to be released, and Thomas Williams needs to go scrub bathrooms in a Starbucks somewhere and spend the rest of his life begging God to have mercy on his monstrosity.

For Williams to tweet the quote above is a textbook example of the phenomenon of Diabolical Narcissist Psychopaths watching other people permit them to get away with the most egregious lying, hypocrisy and criminality – pushing that envelope and then luxuriating in their own perceived “untouchability”.

As I have been screeching for years, the currency these Diabolical Narcissist Psychopaths trade in is BLACKMAIL.  You can’t hope to fix a paradigm filled with moral reprobate scum, every one of them blackmailable and willing to blackmail.  That is why we say that supernatural intervention is ultimately going to be required.