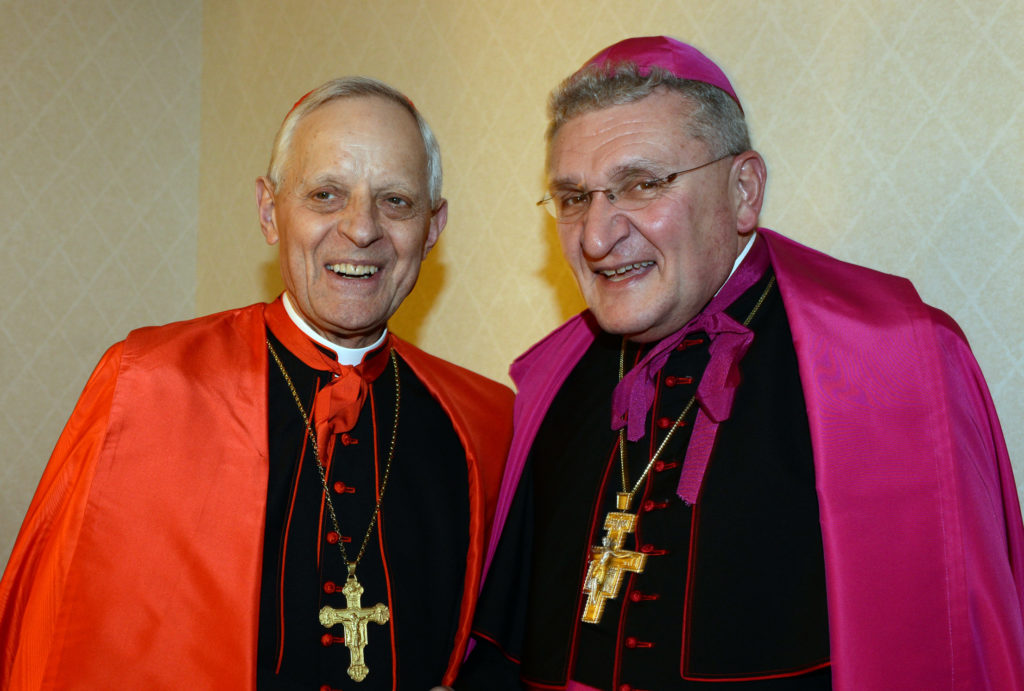 Filthy Sodomite Cardinal Donald “Donna” Wuerl and his hand-picked faggot successor, David Zubik, who apparently fell out of the ugly tree and hit every branch on the way down. Zubik’s faggot nickname is “the french kisser”. If you didn’t just throw up in your mouth at the thought of that, there is something wrong with you.

By the way, if there are ANY men who went through the North American College in Rome (called “The Nac”) out there reading this space (and I know there are), we all know you have Wuerl stories.  The faggoty diva accommodation riders, namely the chocolates on the pillow, all of that crap.  Also, the sodomy.  Yeah.  Feel free to go ahead and speak up about the fellatio between Wuerl and “especially ambitious” Nackers.  WE ALL KNOW.  We all know that you NAC alumni know.  At this point, for you to NOT say anything only makes you look like effeminate, careerist little faggots yourselves, so you might as well speak up, even if COMMON HUMAN DECENCY and the CATHOLIC FAITH don’t sufficiently motivate you.

Word is that Wuerl is going to resign, but is desperately scrambling to be named Archpriest of a major basilica in Rome, where he can live out his days supping at Pierluigi with “promising young Nackers”, and with Mrs. and Mr. Liz Lev at the next table – and maybe Ma Glendon, George Weigel and Lev’s ever-present “emotional support pet faggot” (who definitely has his “Vatican kneepads”) under the table!

And another thing: WHERE, EXACTLY, IS THEODORE MCCARRICK THESE DAYS?

Oh, and one more tidbit.  Word from Rome is that the priest-secretary of Cardinal Coccopalmerio that was caught having a cocaine-fuelled orgy in his apartment inside the Holy Office complex in the Vatican, Monsignor Luigi Capozzi, is now back living happily IN THE VERY SAME APARTMENT.  Apparently he had enough time of “prayer and discernment” in the monastery he was shuffled off to, and it has been decided that the whole incident has been forgotten, so… come on back, and make sure you invite Ricca and Paglia next time!!  Naughty b***h!  This is unconfirmed at this point, but methinks journalists in Rome MIGHT SEE IF THEY CAN CONFIRM THIS.