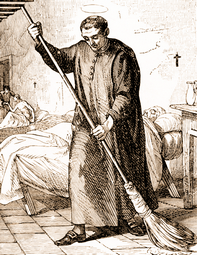 Today is the feast of a fairly obscure saint, St. Francis Caracciolo, and in re-reading just the little Wikipedia page about him, I was gobsmacked by all of his supremely admirable qualities, so much that I thought to myself, “This guy is the complete package in terms of the priesthood.”

Here are just a few highlights:

St. Francis Caracciolo, pray for priests (!), pray for us.