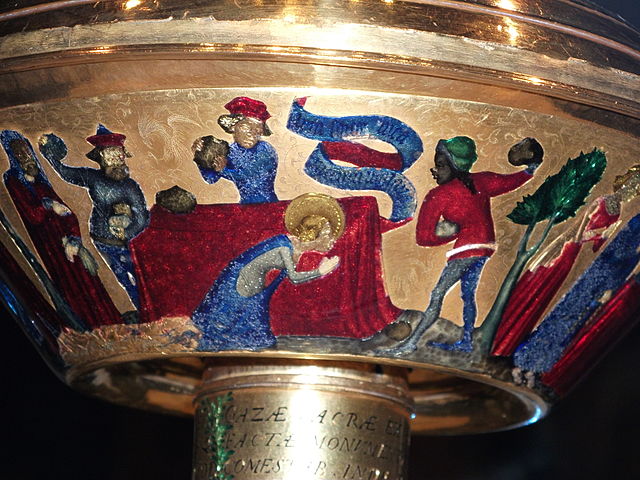 Golden cup depicting St. Emerentiana being stoned to death at the tomb of St. Agnes

Yesterday was the feast of St. Emerentiana.  While her name might sound obscure, she is actually a very important saint, and I look forward to her feast every year.  St. Emerentiana is described as the “friend” or “foster sister” of St. Agnes of Rome, whose feast we just celebrated on Sunday.  St. Agnes was a young virgin of Roman nobility, who refused to marry and was executed after many torments, including being dragged naked through the streets to a brothel. Despite all the efforts of her tormenters, her virginity and modesty was maintained throughout her martyrdom, and finally giving up, her torturers beheaded her.  You can visit St. Agnes’ skull in the church of St. Agnes in the very famous Piazza Navona in Rome.  St. Agnes is commemmorated in the Canon of every Mass at the Nobis quoque peccatoribus, which is one of the “landmarks” in the Mass wherein the priest says the words out loud, not only so that the faithful might confirm exactly where the priest is in the order of the Mass, but also because the Nobis quoque peccatoribus is one of the NINE instances in the Mass wherein Our Lord offers His forgiveness of our venial sins.  Here is the text of the prayer, which comes after the Consecration – so remember, when this prayer is said, Our Lord is physically substantially present on the altar in the transubstiated host – now Body – and chalice – now Blood, and space-time has been manipulated by God Almighty such that the moment of Calvary intersects and touches that moment of “now”, and thus we are literally present at the foot of the Cross.

To us also, thy sinful servants, confiding in the multitude of Thy mercies, vouchsafe to grant some part and fellowship with Thy holy Apostles and Martrys; with John, Stephen, Matthias, Barnabas, Ignatius, Alexander, Marcellinus, Peter, Felicity, Perpetua, Agatha, Lucy, Agnes, Cecily, Anastasia, and with all Thy saints, into whose company we beseech Thee to admit us, not weighing our merits, but pardoning our offenses.

When the priest says aloud, “Nobis quoque peccatoribus”, it is a pious practice for the faithful praying along with the Mass silently on their knees in the nave, to bow their heads and strike their breast, as this is the fifth of nine moments of contrition and, if the person is so disposed, forgiveness of their venial sins in the Mass.

And little St. Agnes is included in the list of saints invoked by name.

But back to St. Emerentiana.  St. Emerentina’s mother was actually St. Agnes’ wetnurse, and thus what would have been called a “slave” of St. Agnes’ noble family, but really such employees of noble families like these were considered part of the family.  So, St. Agnes and St. Emerentiana, while not blood relatives, were more than friends in the sense that St. Emerentiana was a legal part of St. Agnes’ father’s household.  And, naturally they were playmates and friends, but with a decidedly sisterly dynamic between them.  St. Agnes had told St. Ementiana of Our Lord and His Holy Church, and St. Emerentiana wanted to likewise be a Christian, and was thus receiving convert instruction in preparation for her baptism.  Back in those days, this period of instruction lasted years, as it was deemed absolutely essential that catechumens know and hold the Catholic faith whole and entire.  They had to know what exactly they were professing, and be willing to die for it.  If a catechumen were poorly or incompletely catechized, the odds of them apostatizing under threat or torture obviously increased, and such apostasies were profoundly scandalous. Furthermore, as we have discussed previously, hell for the baptized is far worse than hell for the unbaptized precisely because the baptized soul will know, for all eternity, that they had the Beatific Vision, eternity with God, in their grasp, and they lost it by their own free choice to turn their back on Christ in favor of indulging their appetite for sin.

So, St. Agnes was murdered, and a few days later, St. Emerentiana went to her tomb to pray and mourn.  A group of pagans saw St. Emerentiana weeping and praying at St. Agnes’ tomb, and filled with murderous hatred, they stoned her to death.

So, what do you think?  St. Emerentiana had not yet been baptized.  Was she saved?  The Church says, “Yes!” St. Emerentiana is, in fact, a virgin martyr.  She is an example of what is called The Baptism of Desire, and also in this case because she was murdered for her faith, Baptism of Blood.  She had the faith.  She loved Our Lord and His Holy Catholic Church.  She was actively in the process of being catechized so that she could receive the Sacraments of Initiation.  She wasn’t just a “nice person” who nebulously “tried to live a good life”. She was specifically in the process of entering The One True Church.  And since Our Lord is a Person, and not an impersonal legal code or philosophy, and since Our Lord is not a jerk, and is not limited by His Own Sacraments, He can do what He wants, which is ALWAYS perfectly JUST and MERCIFUL.

Now, there is a heresy floating around that was invented by a priest in the 20th century, a Fr. Leonard Feeney, who fell under the influence of… wait for it… a woman, that is called “Feeneyism”.  Nearly all Trad Catholic bloggers are spammed by, and often times calumniated by a very sad man who is a Feeneyite heretic.  I suspect that this chap, who I will not name, because that would just be throwing gas on the flames of his disorder, is not quite altogether mentally right, as he is completely obsessed with the Feeneyite heresy, and seems to suffer from a total lack of self-awareness and delusions of grandeur.  One of the symptoms of these mental disorders that I have noticed over the years of my internet notoriety, such as it is, from what might be called low-grade Asperger’s all the way up to full-blown paranoid schizophrenia, is that the people in question are utterly convinced that the entire universe is hanging on their every word.  It never occurs to them that the reason no one responds to them is because no one is paying attention.  It never occurs to them that people simply block them, send their emails to the spam folder or to auto-delete, and that they are being ignored.  Again, this is another negative aspect of the internet – it feeds and amplifies not only narcissism, but also mental illness.

The heresy of Feeneyism revolves around the doctrine of Extra Ecclesiam Nulla Salus (EENS), which means, “Outside The Church There Is No Salvation”.  Feeneyites argue, very unsuccessfully, that God Almighty is, in fact, limited by His Own Sacraments, and that it is completely impossible for someone who never received Water Baptism to be saved.  So what do Feeneyites say about not just St. Emerentiana, but the other saints that The Church has lifted to the altar? namely, Saints Victor, Rhais and Hericlides, who were all catechumens, and even an unnamed soldier in England during the reign of Diocletian who was converted by St. Alban as the soldier was escorting St. Alban to his execution.  The soldier was thus executed with St. Alban, and The Church thus holds this soldier, St. Alban’s companion, as having been Baptized By Blood.

The Feeneyites tend to stare at their shoes, and then mumble something about these people being “baptized by the angels”.  Well, we can see where this leads.  If the angels come down and baptize with water, then why don’t the angels baptize babies that are about to be murdered by abortion?  And if the angels DO preternaturally baptize babies with water, then why, exactly shouldn’t a woman murder her own child – after all, if the angels swoop down and “baptize” the child, the child goes instantly to heaven, right?  So, yeah, the heresy of Feeneyism leads very quickly to abortion being the greatest act of love and mercy a woman can do for her child.  Murder the child and guarantee it heaven.  Because, folks, ALL HERESIES, BECAUSE THEY ARE BASED ON A FALSE BASE PREMISE, INEVITABLY LEAD TO TOTAL INVERSION. Some heresies only take one or two logical steps to end up at child murder or the like, while some are more subtle and take a few more logical steps, but they ALL end up in hell.  There is only One Truth, and this is why Our Lord said, “Enter ye in at the narrow gate: for wide is the gate, and broad is the way that leadeth to destruction, and many there are who go in thereat. How narrow is the gate, and strait is the way that leadeth to life: and few there are that find it!”

If you would like to read more about the doctrine of Extra Ecclesiam Nulla Salus, which is so critical, and which is openly denied today by Antipope Bergoglio and the rest of the Freemasonic infiltrators of The Church, I wrote a piece a while back that tries to explain it a bit.  In contemporary parlance, the denial of EENS is called the heresy of “Universalism” and “Indifferentism”.  Long story short, of course there is no salvation outside The Church.  Heaven is The Church Triumphant, that is all the angels and saints INDWELLING inside The Triune Godhead, eternally adoring God “from the inside”, offering the endless Sacrifice of Praise and Thanksgiving.  There is no domain of heaven outside of this.  There is certainly no “Hindu heaven” or “Buddhist heaven” or “Protestant heaven” or “atheist heaven”.  Everyone in heaven is Catholic, because the Catholic Church, Triumphant, is The Father’s House of Many Mansions. And there is no other House.  There is no other Truth. Only hell exists outside of the Beatific Vision.  The domain of hell called “The Limbo of the Innocents” does not involve torment, but it is hell because it is outside of God.  The hell of the damned, which, sadly, most people probably end up in, involves torment because the people there are aware of the fact that they will never see God, and that they COULD have been saved, but freely chose not to be.  God, in His mercy, allows these lost souls to be tormented by demons, and by each other, AS A MERCIFUL DISTRACTION.  Sit in stillness with that until it sinks in.  Not only should it drive home how truly awful eternal damnation will be, but more importantly, it should drive home how incredibly, incomprehensibly GOOD heaven is.  Heaven is so good that the worst possible torment would be for a damned soul to spend all eternity, alone and undistracted, pondering what they will never see by their own free choice – God Himself.

So, one day late, St. Emerentiana, pray for us.
Saints Victor, Rhais, Hericlides and the Companion of St. Alban, pray for us.