It’s kindof an afterthought now, but worth getting on the public record.  The four winged baby angel heads (a very common motif in the Baroque) that surround the Holy Family appear to have big, ample bosoms. 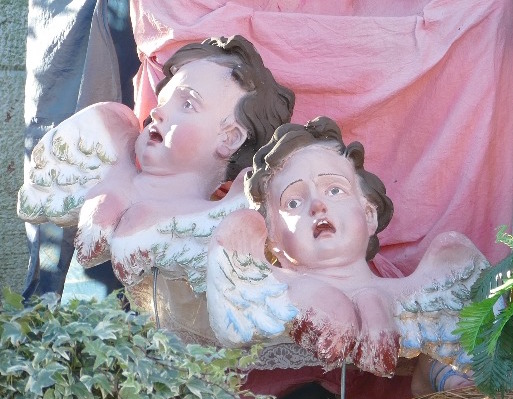 Close-up of the two winged angels at the foot of the Blessed Virgin in the Vatican Nativity Scene. Note the cleavage, and the rouged coloring of the “pushed-up” bosoms.  There are two other winged angels, like this, with the same protruding “bosoms” surrounding the Holy Family.

If you look at the faces of the baby angels, first, they have extremely disturbing facial expressions, and second it seems to me that they are little boy baby angels.  So, yes, it seems that not only is this a winking nod to the transvestites (and the word folks is TRANSVESTITE, not transsexual – there is no such thing as a “transsexual” because no one can change their sex, the entire notion is utterly irrational and detached from reality), and it also definitely enters into the domain of pedophilia and the sexualization of small children.  And yes, I know that some people will look at that and say that the “bosoms” are a double-entendre of sorts for butt cheeks, which at this point, I wouldn’t put past these perverts.

Remember, ALL SODOMITES ARE, BY DEFINITION, A CLEAR AND PRESENT DANGER TO CHILDREN. INCLUDING FIRST-DEGREE BLOOD RELATIVES. PERIOD.

So, once again, this monstrosity needs to be torn down.  A group of Catholic men need to muster – preferably in a group of at least one thousand, notify the Italian police and the Swiss Guards that they will be arriving at St. Peter’s Square in the wee hours of the morning so as not to disrupt traffic, and that they will quietly and quickly dismantle this blasphemous manifestation of the satanic powers now occupying the Vatican, and then all kneel and pray the Rosary in reparation to the Immaculate Heart of Mary and the Sacred Heart of Jesus, and then leave. And tell them that they are all, every one, willing to be arrested.

But, of course, no one will do this, because this would require virility and potency, and a willingness to suffer.  Better to just let the God-hating sex perverts have their blasphemous fun and not be inconvenienced ourselves, right?

The notorious sodomite Jesuit priest, James Martin, is already engaging in TEXTBOOK GASLIGHTING, by accusing people who are calling out this filthy blasphemy of being sex perverts themselves.  Again, if you don’t remember what gaslighting is, it is defined as:

So, in this case, the gaslighting tactic is to erect an obviously homoerotic Nativity scene, and then when people object, haughtily declare them to be “crazy” and “perverts” themselves.  It was all planned out, and they knew exactly what they would do when people objected to it.  Don’t doubt that for a second.  My full essay GASLIGHTING is HERE.

Now, a quick word on the huge scandal that broke today about Antipope Bergoglio’s right-hand man and leader of Bergoglio’s “Gang of Nine” Cardinals, Cardinal Maradiaga, a card-carrying Communist from Honduras, embezzling funds from the local diocese and university to the tune of $41,000 PER MONTH (plus a Christmas bonus of over $60k) for years and years, with over $1 million “missing” from investment accounts in Maradiaga’s name or control in London and Germany, and funneling money to his boyfriend, who apparently masquerades as a priest while never having been ordained, one Erick Cravioto Fajardo. Sure enough, Maradiaga is throwing his sodomite accomplices, including his Auxiliary Bishop, under the bus.

Folks, this is going to get really interesting really fast.  The code of omertá (mafia silence) among the faggots in the Vatican is breaking down, and when faggot omertá breaks down, those black-hearted perverts, incapable of love, friendship, loyalty and anything else good, will turn on each other in the most vicious ways, because after all, if one would engage in the filthy acts that these monsters do, and use, degrade and objectify other human beings in the most unspeakable and nauseating ways for pleasure the way they all do by definition, then why wouldn’t they throw each other under the bus to save their own skins?  Oh yeah. Warm up the popcorn popper.