Frank Walker over at Canon212 had a top headline a couple of days ago with a picture of the Blessed Virgin in the Vatican Nativity scene asking a question that several other people had emailed to me – Why does the Blessed Virgin look like a man?  I didn’t think too much about it, chocking it up to a poorly executed sculpture, despite the fact that there is clear homoerotica present in the rest of the Nativity scene.

It turns out that the whole Vatican Nativity scene was commissioned by the Sanctuary of Montevergine, a Benedictine monastery outside of Naples.  English reportage on that HERE.  Thanks to the eagle-eyed reader in Argentina who alerted me to this and provided the deep links below.

The Sanctuary of Montevergine has long been notoriously and blasphemously claimed as a mascot and meeting place for sodomites and transvestites.  Here is an Italian newspaper piece from February of ARSH 2017 describing this.  The headline reads: “Gay Outrage: Our Lady Also Siezed: It Happens In Italy, Where and How”.

A false story was started by sodomites that two sodomite men, after being caught, convicted and condemned to death by exposure for their sickening capital crimes by being tied to a tree, were miraculously saved by the Virgin of Montevergine, whereupon the two sodomites… wait for it… promptly celebrated by sodomizing each other because their “love” had been ratified by the Queen of Heaven, or something.

Blasphemy of the sickest and most demonic sort.  This blasphemy spread, and now the Sanctuary of Montevergine is used by Italian sodomites as a mascot for gay pride marches and drag queen conventions.  The biggest gay pride march at the Shrine of Montevergine, happens, even more blasphemously, on February 2, the Feast of the Purification of the Blessed Virgin.

So, to all the people who remarked that the figure of the Blessed Virgin in the Vatican Nativity scene looks really, really masculine, almost like a man in drag (look at the enormous hands!), I think you very well may have been vindicated.

Here is an image of the whole scene in which you can see the coopted image of the Madonna of Montevergine, referred to today as the “Gay Madonna”, “Madonna of the Drag Queens”, on the left. 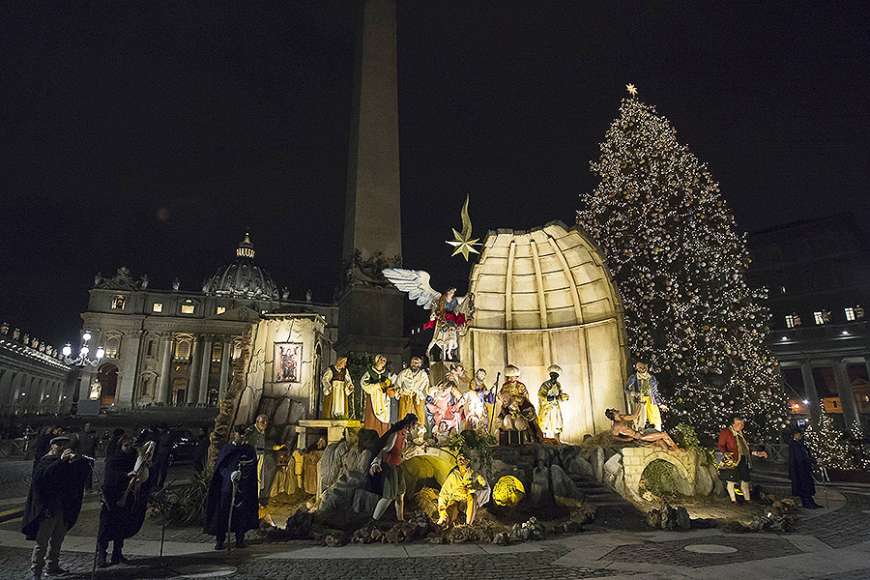 The image of the Madonna of Montevergine, which has been blasphemously coopted by sodomites and is now widely known in Italy as “The Gay Madonna” and “Madonna of the Drag Queens”, is on the left.

Like I said, the wretched faggots in the Vatican, with Antipope Bergoglio as their leader, are laughing their asses of at all of this.  And satan squeals with delight. I think it is now very clear that this blasphemous monstrosity needs to be torn down. And I’m not kidding.

Here are a list of links for further reading and confirmation.

LifeSite News has published a detailed exposé on this that should be spread far and wide.  Here is the money quote, emphases mine:

An official of the Vatican’s Governorate has told LifeSiteNews that the abbey of Montevergine initially proposed the original idea for the ‘Nativity of Mercy.’ The Vatican discussed and developed a more detailed design with the abbey, then submitted final plans to the Secretary of State and Pope Francis (sic) for approval, which was duly granted.

“The presence of the Vatican Nativity Scene for us is a reason to be even happier this year,” Antonello Sannini, president of homosexual activist group Arcigay Naples, told LifeSiteNews on Tuesday. “For the homosexual and transsexual community in Naples, it is an important symbol of inclusion and integration.”

Our Lady of Montevergine, Mother most pure, pray for us.