And this is a day of Holy Obligation, meaning it is MORTAL SIN to not go to Mass today.  Don’t worry.  I have a whole rant on the failure of the Novus Ordo (especially RCIA) to communicate the importance of the Days of Obligation – first among which is… wait for it… EVERY Sunday.  Since nefarious forces are trying to erase me from the internet, I suppose I should write with all urgency all of the essays I need to write, especially on churchy matters.

One of my most popular essays, and one that still holds the highest “cool factor” for me is the one about The Immaculate Conception and The Assumption.  For me, one of the coolest things is when contemporary science confirms something biblical or churchy.  With archaeology, it seems that it happens all the time.  But my favorite so far, without question, is the discovery that the cells of a child in utero persist in the body of the mother for the rest of her life, and even have healing effects.

So, yes, the cells of children aborted by their mother – and remember abortion is nothing less than the first-degree, premeditated and physically cooperated-in murder of a child by its mother – can be forgiven by just the tiniest drop of Our Blessed Lord’s Most Precious Blood – provided the mother is truly sorry.  Those cells, of those children, persist in the body of the mother, and oftentimes are sprung into action to physically heal the body of the mother, decades after the pregnancy.

I remember well the multiple times that a woman – a “trad Catholic” – came and knelt next to me not ten seconds after going to confession during Sunday Mass, leaned in to me kneeling in the pew and said, “Ha-ha! Off scott-free yet again! Gotta love the sacraments!”  This probably nullified the sacrament in those instances, and I carry the utmost terror in my heart for this woman to this day, because I later found out that she aborted ALL of her children – every child she ever conceived, and there were “several” over the years – that she aborted in her previous, pre-reversion life.  The only thing between her and the eternal hell she so richly deserves for depriving every single one of her children of even the CHANCE of the Beatific Vision through Baptism,  as the body-and-soul murderess she is, is the Sacrament of Penance, which to this day she treats as the punchline to a tasteless, impious joke, the Sacrament of Penance – Confession.

To hold that Sacrament, the very blessed Sacrament that raises the dead (like her) to life as the butt of a sick joke is, frankly, beyond the pale.  Please pray for her, as I do every day, in the Rosary and at Holy Mass.  Our prayers may be her only hope, even though she holds such prayers and pieties in contempt.

But, back to the Immacolata.

If you are interested in reading about the super-cool science of the Immaculate Conception, might I suggest:

my Q&A piece from when I was thrown out of the Novus Ordo Thomistic Ethics class because the Novus Ordo Kathys were pissed off that I defended the Infallible Dogma of the Immaculate Conception to them during class (no, Sweetie, aborted babies DO NOT go to heaven….):

READ ALL ABOUT IT HERE. 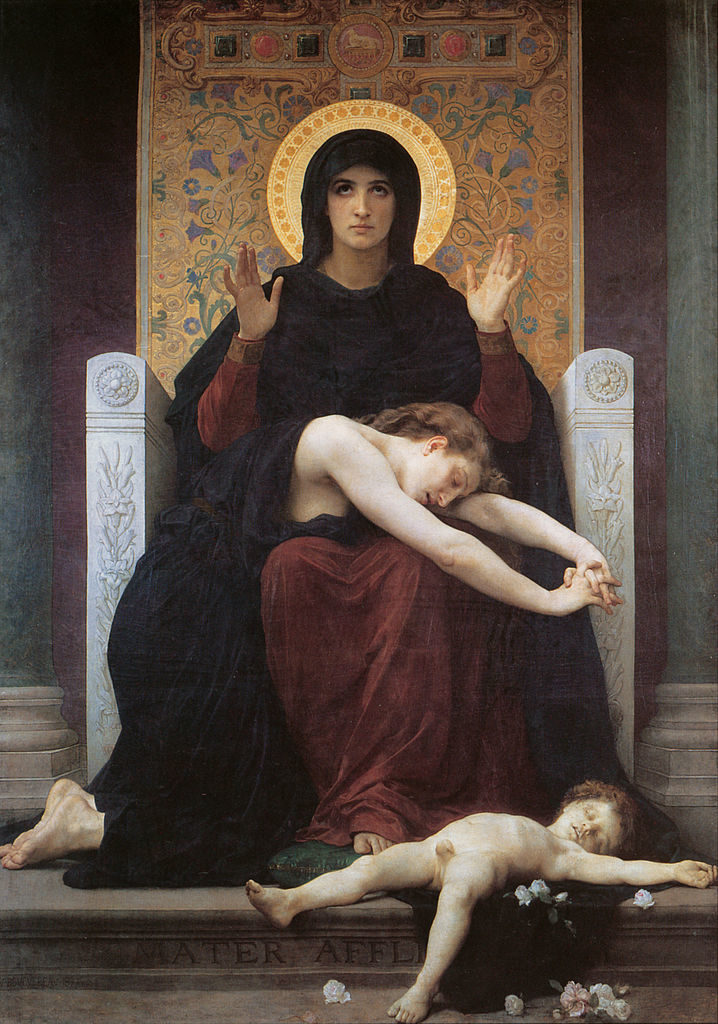 This is one of my favorite paintings from one of my favorite artists – second only to Guido Reni, William Adolphe Bouguereau.  Many snobs discount all artists of the 19th century, especially French, for coming after the Napoleonic Revolutionary eras, and for being too “realistic”, but I think the realism of the 19th century can be soul-piercing.  Such with this piece.  The Blessed Mother holds in her lap a mother whose dead son reposes below. The Blessed Mother, in black, evokes every Pieta – every image of the Virgin holding the dead Christ – while invoking the mercy and consolation provided by her Divine Son.  Look at the face of the Virgin.  Look at what I like to call the “Ferocious Love” in her countenance, as she appeals to her Father, Son and Spouse – the Triune Godhead.

Men, especially, look upon a woman that, while completely feminine, can be looked upon as an exemplar of virility and potency, and thus as a model of authentic masculinity for men without the slightest tension.  This is the Blessed Virgin.  How can it be that a woman provide any template for masculinity whilst remaining feminine? Look at the Virgin.

And, if you want to see how the Godhead can provide a template for both masculine and feminine charity, do read my piece on how ONLY MEN CAN EVER BE PRIESTS.   This piece has spurred numerous conversions, and has spurred married Lutheran convert and Anglican Ordinariate priests to enter, like the Apostles themselves (except St. John who was a virgin), into continence with their wives after realizing how the Holy Sacrifice of the Mass is also a profoundly NUPTIAL event.  It is one of the most important pieces I have ever written, and sometimes I read it and still can’t quite believe that I wrote it. But, I remember the moment at my second Tridentine Mass when it coalesced completely in my mind – horrific sinner that I am.  ELBOWS DOWN….

As this site comes under cyber-attack, I am reminded that one only draws fire when one is over the target. And I am feeling better, and pneumonia (I was genuinely worried) seems to have been avoided, thanks be to God. Now, if we can get the site stabilized and the attacks fully deflected, we can resume recording and posting podcasts.

I hope this helps. Plenty more to say, coming soon.