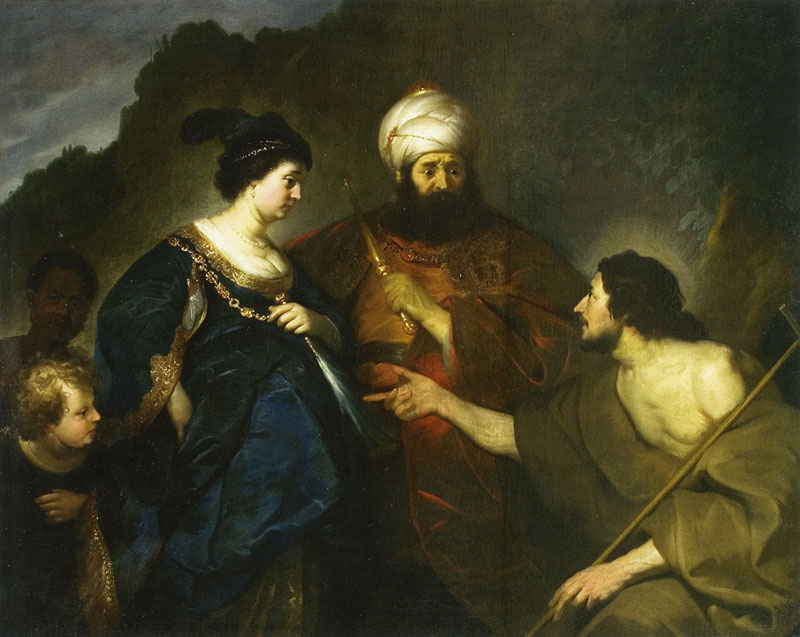 The following is an EXTREMELY prescient and timely sermon of St. Peter Chrysologous who was a Fifth Century bishop of Ravenna in Italy.  For anyone who is following events surrounding the Bergoglian antipapacy, and specifically the relentless attack on marriage, it is impossible to read this without seeing the contemporary relevance. Emphases mine.

Today while the virtue of John and the ferocity of Herod are related to us, our innards were shaken, our hearts trembled, our sight grew dim, our mind became dull, our hearing deserted us. For is there anything within human sensation that remains undisturbed within when a large amount of vice destroys a large amount of virtue?

“Herod,” it says, “apprehended John, and had him bound, and put in prison.” (Mt. 14:3) John was the school of the virtues, the instructor of life, the model of sanctity, the pattern of morality, the mirror of virginity, the epitome of purity, the example of chastity, the way of penitence, the pardon of sins, the discipline of faith. John was greater than a human being, equal to the angels, the apex of the Law, the seed of the Gospel, the harbinger of the Apostles, the silence of the Prophets, the lamp of the world, the herald of the Judge, the Forerunner of Christ, the preparer for the Lord, the witness of God, the mediator of the Whole Trinity.

But Herod is the very one who desecrated the Temple, ruined the priesthood, disturbed its proper order, profaned the kingdom, corrupted anything that had to do with religion, the Law, life and morals, faith and discipline. Herod was ever an assassin toward his fellow citizens, a brigand toward people of any distinction, a ravager toward his allies, a robber toward those of his own household, a killer  of the common folk, a murderer of his children, a slayer of foreigners, a parricide towards his own, drenching the land with gore in his bloodthirstiness. And so it is that he gulped down the hallowed blood of John from his enormous cup of cruelty. But now let the reading speak for itself.

“Herod,” it says, “apprehended John and had him bound.” He who had released sins’ shackles is bound with the shackles of a sinner, so that pardon once shackled might not leave any room for pardon. “He had him bound and put in prison.” Herod, you are the one who committed adultery, yet John the Baptist goes to prison? Thus one who is guilty sits in the judge’s place and passes judgment, the persecutor of innocence takes the place of a defender. I ask, where is truth to be found? Where is good reputation? Where is decency? Where is the good name of the public magistrate? In fact, where is God? Where is the human being? Where is decorum? Where is the law? Where are purely natural rights? Everything all at once has been thrown into turmoil, O Herod, because of the way you act, pass judgment, and give orders.

“He apprehended John,” it says, “and he had him bound, and put in prison.” Herod, you are being subpoenaed, his shackles place the blame on you, the prison accuses you, the harm done to John publicly points to you. The one who looks for the reason for John’s arrest finds in you what deserves punishment, and the cause for his distress about John. John, who is recognized throughout the world for his reputation, who is known for his virtue, who is widely renowned for his sanctity, by attracting to himself those who inquire into the harm done to him, sees to it that your incest becomes disclosed to all; he brings it about that you are put to shame in public, since a reproof in private was unable to reform you.

John kept after Herod with warnings, not with an accusation; he wanted him to mend his ways, not to perish; but Herod preferred to perish rather than to reform. To those held captive by crimes the freedom of innocence become most odious. Virtue is antagonistic to the vicious, sanctity is detestable to the sacrilegious, chastity is inimical to the shameless, integrity is a punishment to the corrupt, temperance is a foe to the wanton; mercy is unbearable to the cruel, godliness to the ungodly, justice to the unjust.

The Evangelist attests to this when he says: “John kept saying: ‘It is not right for you to take the wife of your brother Philip.’ ” This is the reason why John runs afoul. The one who warns the wicked is a considered offensive. The one who rebukes those who are at fault is deemed blameworthy. What John had to say concerned the Law, justice, and well-being; his remarks certainly were not spoken out of hatred, but out of love: but see what kind of reward he received for his devotion from the ungodly one!

“Although he wanted to kill him,” it says, “he was afraid of the people.” It is easy for one to turn away from justice who is motivated by the fear; not of God, but of human beings. This fear can postpone the opportunity to sin, but cannot take away the will to sin. Therefore it is also the case that those whom fear delays from committing iniquity become even more eager for iniquity. It is only the fear of God which corrects minds, banishes offenses, preserves innocence, and bestows an endless capacity for good. But let us hear about what the most blessed John actually suffered.

“On Herod’s birthday,” it says, “the daughter of Herodias danced in the middle of his dining room, and it pleased Herod, and he made an oath promising to give her whatever she asked of him. But, having been advised earlier by her mother, she said: ‘Give me the head of John the Baptist on a dish.’ And the king was deeply saddened on account of the oath: nevertheless, because of those who were dining there he ordered it to be given to her, and sent to have John beheaded, and his head was placed on a dish and given to the girl, and the girl gave it to her mother.” ( 14:6-11)

You have heard, brothers, how great is the cruelty which is born from pleasure. “And his head was placed on a dish.” (v.11) An house is transformed into an arena, the table turns into a theater, dinner guests become spectators, a banquet is changed into frenzy, a meal becomes a massacre, wine changes to blood, a funeral is held on a birthday, to mark one person’s beginning is another person’s ending, a banquet is changed into a murder scene, musical instruments ring out the tragedy of ages.

A beast, not a girl, enters; a ferocious animal, not a woman, prances about; along her head she combs out her mane, not her hair; she stretches and contorts her frame, but it is her savagery that grows and intensifies, her cruelty that looms large, but not her body; this wild animal unequaled in ferocity roars with her mouth, gnashes her teeth, she is not struck by a sword, but wield its. “Advised earlier,” it says, “by her mother,” (v.8), and brandishing a lance from her mother’s heart, as a new kind of beast, she disdains preying upon the body and proceeds to lop off the head itself.

But, lest anyone think that we want to hear ourselves talk about such things, we do not want to hear ourselves talk, but we want to cry out so that the joys of your festivities be celebrated prudently, so that the parties that mark your birthdays maintain moderation in merriment, so that Christ may attend your feasts, that the banquet be held in the sight of the Author; may the very nature of the celebration to which we are invited be honoured by decency; may the happiness of your table extend to the poor, may your household dance with the discipline of innocence. May debauchery depart, may dissipation be banished; may the plague of dancing girls, the bawdy songs of musicians, what fuels pleasures, what weights down the belly, and what shipwrecks minds all be done away with, be wiped out with the feasts of Herodias, so that your joy at present may reach an happiness that lasts forever.

Today, brothers, we have directed our sermon to Herod, because the listener is well aware how great is the martyr’s bliss, when he hears about the misery of the persecutor. Nevertheless, it is fitting for us to know both that John came to birth as a result of his death, and that Herod died as a result of how he spent his birthday.

And people wonder why I strongly suspect that Antipope Bergoglio might just be the False Prophet Forerunner of the Antichrist…. -Ann