So YouTube blocked the infamous Cosby episode of the Barnhardt Podcast (Episode #008), and SuperNerd has officially won the over-under.  I said 20 hours, and he said 33 hours.

But, I’m done uploading to YouTube. Why support these paradigms? I have decided to go ahead and self-host the podcasts, even though we are going to have to spend a bit of dough to buy the bandwidth.  At current listenership size, it is manageable.  And, presumably, if the listenership continues to grow, so will supporting donation revenues in proportion, so we will be able to easily stay on top of it.  I think it is a no-brainer. We’re going full-autarky.

This is clearly going to be the new normal.  Social Justice Warriors need only go to YouTube or any other platform and report as “hate speech” anything that does not fully-conform to their satanic ideology.  It’s just one click, and the algorithms take care of the rest. Meanwhile, every rap video ever made, most of the musloid political system’s agitprop and, perhaps most gallingly, the entire Barry Manilow oeuvre, remain, completely untouched and even guarded.

So that’s the news, and quoting now those two great Americans of yesteryear, Frank Bartles and Ed Jaymes:

THANK-YOU FOR YOUR SUPPORT. 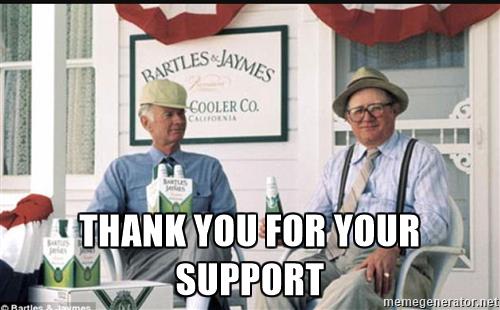