A priest friend who is also friends with St. Philip Neri sent me the following excerpt from a biography of St. Philip:

“It happened once that a thief entered his room and stole his money – the amount was small, but for his state it was a big loss. But whenever he spoke about it, with a big smile he would say that whoever stole it needed it more than he did, and that in that person’s hand that money would be better allocated than in his own, and he did not want to start an investigation.”

But it was also mentioned to me that two other saints are particularly good at interceding for thieves:  St. Anthony of Padua, and, of course, The Penitent Thief from Calvary, St. Dismas.  The backstory of St. Dismas is fascinating and instructive.  He was an Egyptian pagan, the son of a career criminal, who followed in and exceeded his father’s wickedness.  Dismas spent his entire life robbing people, and was also a murderer.  What is not widely known is that Dismas attempted to rob the Holy Family thirty-plus years earlier as they made their flight into Egypt.  They had nothing to steal, but beyond that, Dismas was… affected by the Infant Christ. Dismas continued his life of crime, and was caught and due to his litany of crimes and infamy, was put to the most horrific death possible: crucifixion.  By grace, he repented, confessed Christ, died, and was one of the very first, if not the first person to enter Heaven.  In fact, many images of the Harrowing of Hell show St. Dismas, carrying his cross, directly behind and with Christ.  How instructive this is.

If you would like to read a more detailed account of St. Dismas the Penitent Thief, THIS IS A GREAT START. 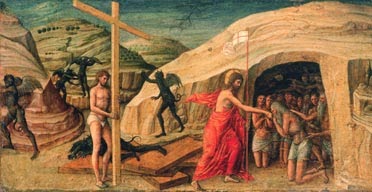 The Harrowing of Hell. Christ on the right, St. Dismas with his cross, on the left.